ELECTRIC HEART: Made 100% by heart

How do you make a film that is the first of its kind without the proper finances to pull it off?

The same “Heart” that keeps you up at night telling you that you were put on this planet to do something greater, to share a vision, to share a story, and to share an experience that will touch the lives of those who see it. The same “Heart” that reminds you that the success of the film is not as important as the chance taken on making it. And knowing that you did everything possible to finish it including having your cell phone service cancelled, selling your car and becoming homeless. The same “Heart” that told you for three months straight, to just hold on. All while battling depression that stemmed from questions like “What did I do with my life?” and “Why did I follow my “Heart?””

I first came up with the idea of creating FilmEDM Experiences, silent narrative feature films accompanied by Electric Dance Music mixes, back in 2004.

The story was simple; two friends embark on a journey from Portland to Las Vegas in search of love on their way to a music festival. With the script finished, our line producer came back with a budget needed of $1.4 Million in order to complete the film. I knew that I couldn’t raise that amount on my own, so I asked the line producer to strip out as much as we could. Everyone that would come on board to help us bring ELECTRIC HEART to life was going to have to wear numerous hats, and the ride wasn’t going to be as comfortable as most films with higher budgets were. With all of the cuts made, the budget was now at $300K, which seemed more reasonable to attain, especially with the success many films were having from crowdfunding.

Thus, a crowdfunding campaign was created to raise the funds needed for ELECTRIC HEART through Indiegogo, but the campaign came up short…$286K short. How would we ever make a film with one percent of the original budget?

Most people who lack the “Heart” that it takes to create an independent film would have stopped there, but I had a “Heart” telling me that anything was possible. So, we set out to film the first scenes of ELECTRIC HEART, driving fifteen hours from Los Angeles to Portland. With only $14K, I didn’t know how we’d ever finish the film, let alone how I would get the cast and crew home from Portland. Portland would be the first of three major cities that the script called for; Los Angeles and Las Vegas would follow.

Portland was supposed to be a bonding experience for the cast and crew. We thought that it would be the easiest city to film. In reality, it was the hardest and most stressful city to film and the production of ELECTRIC HEART almost fell apart in Portland. Both cast and crew were uncomfortable with the schedule and limited resources available, and a struggle for power took place over the direction of the film. I did my best to keep everyone happy and follow my “Heart,” but there was just too much stress for the filming of Portland to be smooth.

On top of the strain of scheduling and finances, one of lead actors, Amick Viccellio, who had never driven a stick shift vehicle before in his life, was asked to drive seventy-three miles from Tillamook to Portland, Oregon in a stick shift 1994 Geo Metro that had been purchased for the film. Fifteen minutes into the drive, we heard a loud thump. We had lost our exhaust pipe along the way. In the midst of all this, my girlfriend of a year and a half and I had a falling out during the filming of Portland, making the cast and crew feel uncomfortable on set.

In reality, Portland did end up being a bonding experience, because it brought the cast, crew, and myself closer together. It made us stronger for the bigger cities that came ahead.

More money would come in, in order for us to keep filming ELECTRIC HEART, but it would barely get us through Los Angeles. With my “Heart” telling me that I should keep going, we set off to shoot the driving sequences of our buddy-road-trip film in the Los Angeles National Forrest. It was the perfect look for the scene where law enforcement officers pull over our two main characters. The only problem with shooting this scene was that we didn’t have enough money for the proper film permits to shoot it legally; which meant our cast and crew were driving around in an illegal undercover law enforcement vehicle, dressed in fake law enforcement uniforms.

In the middle of filming this scene, United States Rangers in full tactical gear drove up to our set. How could they not arrest us all for impersonating officers of the law?
Luckily, from my past experiences of getting in trouble with the law I knew two things: play dumb and show respect.

Before we set out for Portland, I started researching “Guerrilla Filmmaking,” which basically means that you’re filming without the permission of anyone. In my research, it was strongly suggested that I obtain a student identification card, so I did so from Santa Monica Community College. I already had two film degrees, a Bachelor of Fine Arts from Brooks Institute of Photography in Film/Video Production and a Master of Fine Arts from the American Film Institute Conservatory in Film Editing, but I didn’t have a current student identification card from either of these schools, being six years removed from A.F.I.

Feigning ignorance, I pulled out the student identification card from Santa Monica Community College and told the rangers that I was shooting a student film. I wasn’t sure what the rangers would say, especially since I didn’t look like a student at 36 years of age. The rangers informed me that I was filming without a film permit and I was given a citation, but not just any citation. My citation stated that I needed to appear in Federal Court, and there was no fine amount on the citation.
I guess it was better than being arrested for impersonating officers, a misdemeanour. Luckily, the rangers just made us leave after the citation was given, and they allowed us to keep our film, cameras, fake law enforcement uniforms, and illegal law enforcement vehicle. 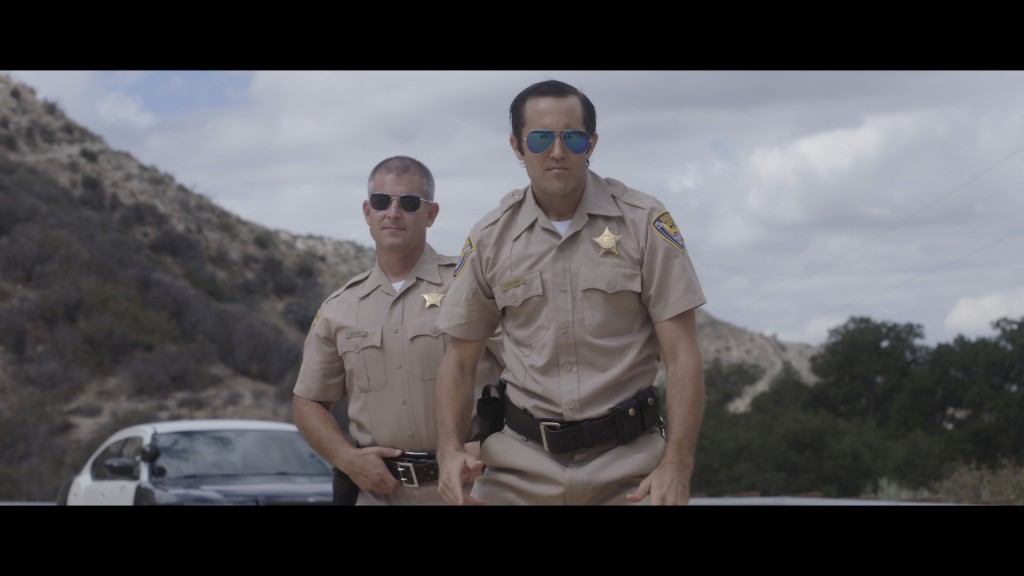 If I would have gone through the proper procedure that day and paid for the film permit, insurance, and the required off-duty law enforcement officer to observe the filming, then the cost would have been $14K, the same amount raised in our Indiegogo campaign. Instead, I rolled the dice. The respect that I showed the rangers paid off, and my fine for filming without a film permit would only be $500 U.S., and would be noted as a petty offence, which does not go on a person’s criminal record.

We had already been stealing locations, but this was the biggest and most extravagant location yet. And just like in OCEAN’S 11, the cast and crew readied for the heist. We did as much preparation and planning leading up to the big day. LIFE IS BEAUTIFUL is a three-day music festival, so we thought it would be best to sneak in and film on Sunday, when security and production would be more interested in being finished with the long weekend than looking for a film crew that was trying to steal a music festival location. As a backup plan, I secured two new iPhones that we could record video to as a backup plan in case we couldn’t get our larger Sony F-55 cameras into the music festival.

The day of, the cast and crew headed towards LIFE IS BEAUTIFUL. We all met for lunch just outside of the music festival, and we still didn’t know how or if we would be able to get in.  It was looking like we were going to have to film with the iPhones, but at last last minute, one of our actresses, who knew one of the Artists playing at LIFE IS BEAUTIFUL, was able to secure with her two all-access wristbands for our two Camera Operators. Our Camera Operators could now walk right into the music festival with our Sony F-55s without any hesitation, and we did just that. 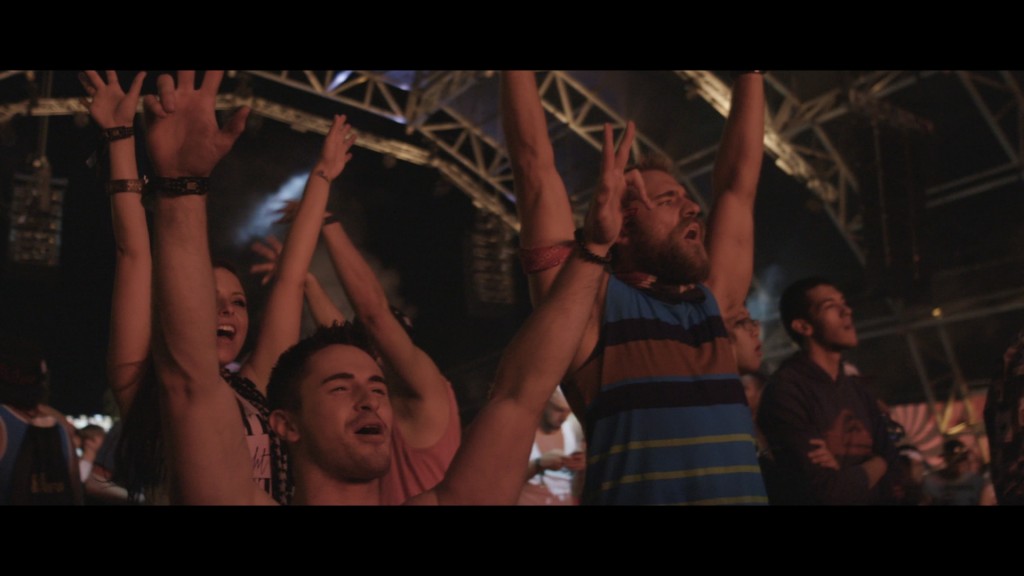 We’d pulled it off. It was better than we could have ever imagined. We now had the perfect ending to ELECTRIC HEART, both production wise, and more importantly, story wise. We followed our “Hearts” and made it to the finish line of production, and were able to finish a film that was a first of its kind without the proper finances to pull it off because we had more than enough “Heart” to rely on instead.

These are just a few stories from making of ELECTRIC HEART. The others are very similar, with a team of cast and crew, most not knowing each other, came together to create something very magical and special.

All you need is “Heart!” The Universe will take care of the rest.