A lot of Hindi films are based on books. English authors, such as William Shakespeare, Agatha Christie, and Jane Austen, have been immensely popular with Hindi filmmakers. Shakespeare’s Romeo and Juliet has been adapted into films the maximum number of times. The melodrama and the suspense make the work of these authors a great subject for films. But, there have also been some Russian authors, whose oeuvre has inspired filmmakers. Fyodor Dostoyevsky is one such popular author whose books have been the subject of quite a few Hindi films. 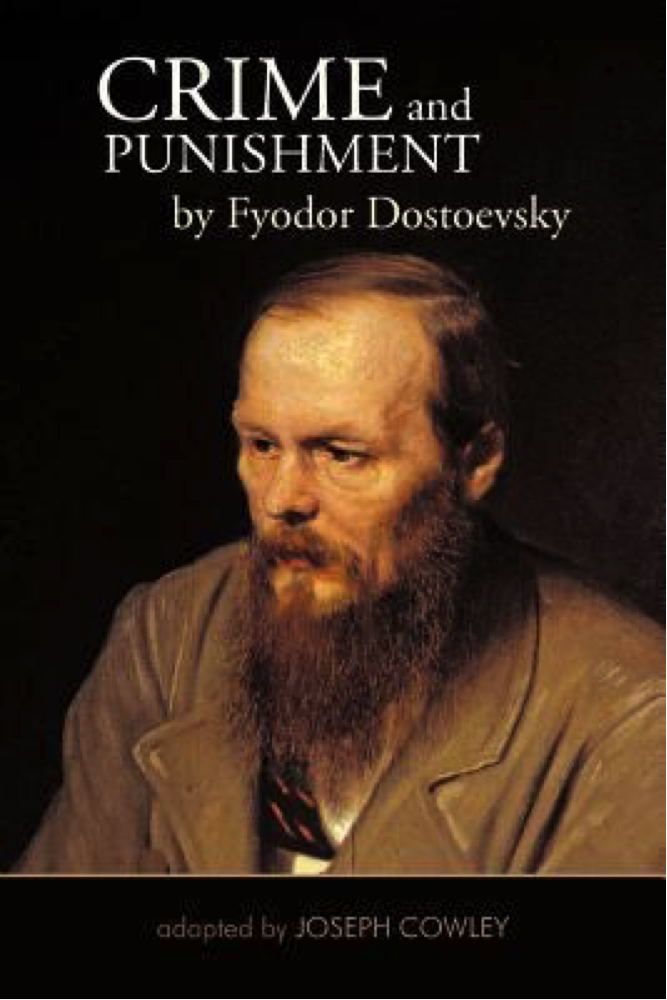 One of the most significant works of Dostoyevsky is Crime and Punishment. The book is based on Rodion Raskolnikov, a poor ex-student in St. Petersburg. Raskolnikov believes that he is an extraordinary man. He conceives a theory where he believes that extraordinary men of the world have a right to commit any crime if they have something of worth to offer humanity. He executes a plan to kill a usurious pawnbroker for her cash. In order to justify his criminal actions, Raskolnikov thinks that he can perform good deeds with the pawnbroker’s money to counterbalance the crime, while ridding the world of an unscrupulous lender. He almost gets away with the murder, but he cannot escape his guilt which eventually puts him under suspicion. Raskolnikov develops a relationship with Sonya, a prostitute driven into the profession by her family’s debilitating poverty. She helps him confess about the murder to get a lenient sentence, and supports him in his redemption.

There have been numerous adaptations of Crime and Punishment in different languages all over the world, including Indian languages, such as Hindi, Telugu, and Kannada. The story has a myriad of themes that are well-suited for the big screen. In 1958, Ramesh Saigal produced and directed Phir Subha Hogi and was inspired by Crime and Punishment. The film starred Raj Kapoor and Mala Sinha in lead roles. It told the story of Ram, a self-respecting impoverished law student who had to pawn his belongings to save his dignity. He resorted to crime to save his beloved Sohni but ended up committing a murder. However, an innocent guy gets implicated for the murder. The police play on Ram’s conscience to confess to the crime. On the last day of the court judgment, Ram confesses to the crime, and saves the innocent from the gallows. He is sentenced to three years in jail. Sohni promises to wait for his release so that they can get married. 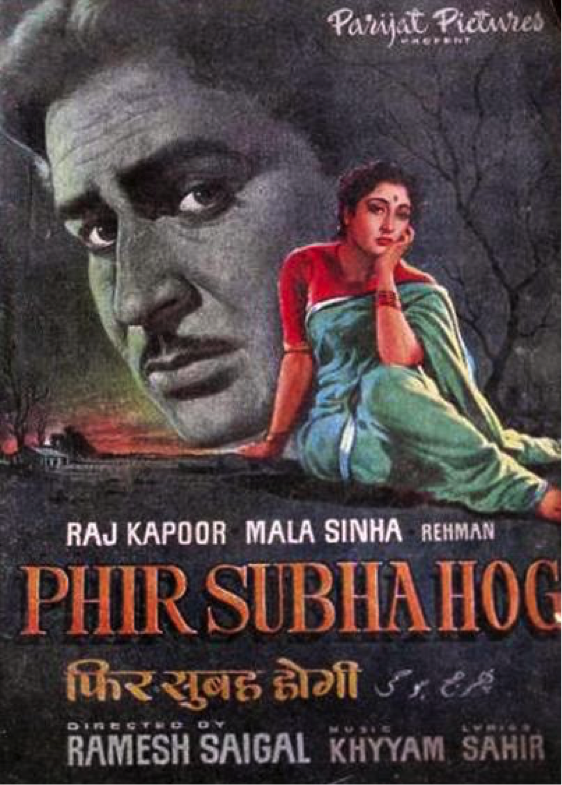 Noted art house director Mani Kaul made two films based on Dostoyevsky’s stories. In 1991, he made Nazar, based on Dostoevsky’s short story, The Meek One. The film was produced by the National Film Development Corporation of India (NFDC). It starred Kaul’s daughter Shambhavi Kaul, Shekhar Kapur, and Surekha Sikri. The Meek One, also called as A Gentle Creature, is one of Fyodor Dostoevsky’s lesser known works but is a purely Dostoevskian story, displaying themes common throughout his larger works. Like Crime and Punishment, The Meek One also begins in a pawnshop. The narrator is a pawnbroker, and he observes an impoverished teenage girl come into his shop on a regular basis. The pawnbroker finds out that the girl is an orphan, and that her abusive aunts are determined to marry her off to an obese shopkeeper who wanted a mother for his kids. The narrator finds himself making an offer, which the girl accepts as being the lesser of two evils. They get married, but are unhappy in their marriage. The girl commits suicide and the narrator does not know why, and tries to understand the reasons. 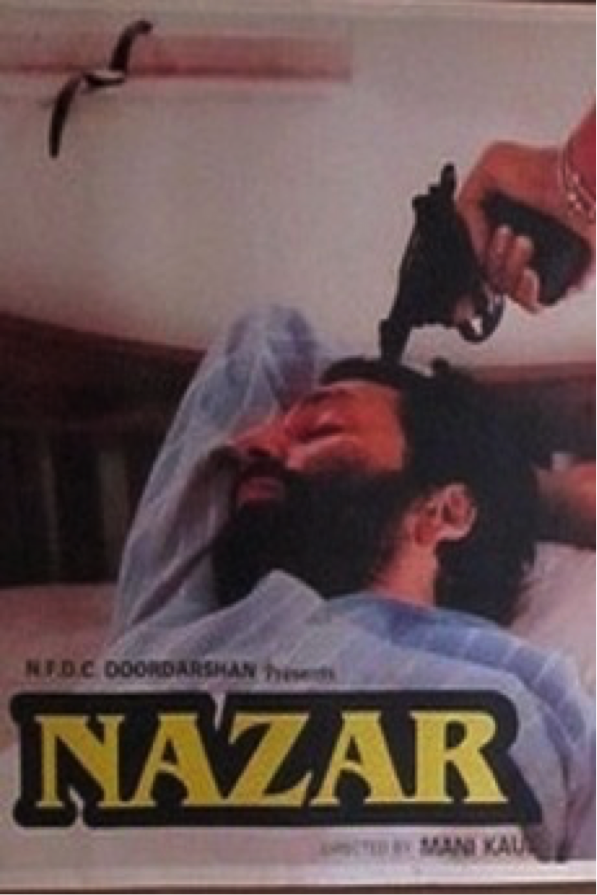 Likewise, Nazar is the saga of a Bombay-based antique dealer-cum-money lender (Shekhar Kapur), who at the age of forty, marries a woman (Shambhavi Kaul) who is seventeen, and brings her home to his spacious flat in a multi-storied building. The film starts off with the young girl committing suicide. The money lender tries to understand what happened before that and the possible reasons that might have driven his wife to commit suicide. Their marriage was an unhappy one, as the bride, who had until her wedding lived her life in an orphanage, is immersed in her own thoughts, and at one point even holds a revolver against her husband’s head while he slept. Sharmistha Mohanty, who also wrote the film’s screenplay, in her tribute to Mani Kaul said, “We adapted a screenplay from it [original story] in which each event was true to the original, but was opened up and stretched by Kaul’s own sense of time. As we read and reread the story, he came up with a deeply original idea. Everything that in the story was interior monologue should in our screenplay be turned into dialogue. Cinematically, this was a masterstroke. It immediately exposed the subterranean movements which would otherwise have been hidden, and gave a heightened inwardness to everything on screen.”

Mani Kaul also made Idiot (Ahamaq), based on Dostoyevsky’s novel, The Idiot. The book is based on Prince Lev Myshkin. He is not an idiot per se, but so called as he is an unfailingly good man in a world that is selfish. The central plot revolves around a love triangle between Prince Myshkin, Aglaia Ivanovna and Nastasya Filipovna. The book underscores the contrast between its characters’ various qualities. Kaul’s Idiot was first released as a four-part television mini-series on Doordarshan channel in 1991, and despite it being released at the New York Film Festival in 1992, it was never commercially released. Idiot starred Ayub Khan-Din and Shah Rukh Khan (gasp!). 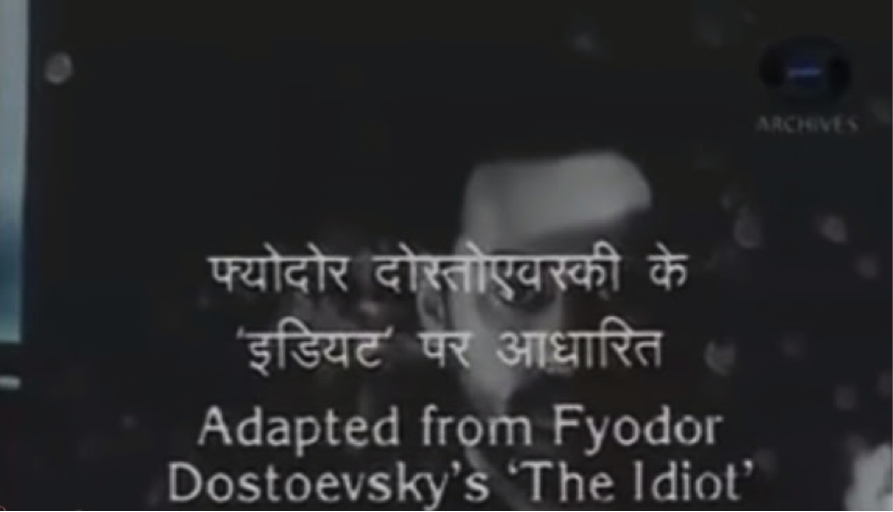 The first film that Shah Rukh ever acted in was a small English movie made in 1988 by director Pradip Krishen and his writer-actor companion Arundhati Roy, called In Which Annie Gives It Those Ones. The film never released commercially but acquired a cult status over the years. One of Shah Rukh’s earliest Hindi films was Idiot. There is an interesting story behind Shah Rukh taking the role. Anupama Chopra, in her book King of Bollywood: Shah Rukh Khan and the Seductive World of Indian Cinema, writes that The Idiot was one of the first books that Shah Rukh’s father gave him. His father had purchased the book for four rupees at Russian Cultural Center in Delhi. It was out of sentimental reasons that Shah Rukh agreed to do Kaul’s Idiot. He was more inclined to become a famous television personality, rather than being a film actor at that point of time. Mani Kaul said about Shah Rukh that he found something, “tragic—unrequited, I was attracted to his voice.” Like Shah Rukh’s earlier films, where he portrayed darker characters, his role in Idiot was also extremely dark. He played Raghujan (based on Roghozin) and is characterized by jealousy and violence. He beats and ultimately stabs the woman he loves to death when he realizes can’t have her. The film is available on YouTube for viewers to witness the classic darker side of Shah Rukh Khan. His role in Darr had shades that were similar to Idiot.

One of another Dostoyevsky’s short stories, White Nights, has also been adapted into films. White Nights is the story of a nameless narrator, who is living in Saint Petersburg, and suffers from loneliness. Over a period of four nights, he gets to know and falls in love with a young woman named Nastenka. Nastenka tells him the story about her missing lover, with whom she is finally reunited after four nights, while the narrator is left alone in the end, with nothing except his love to get him through. In 2007, Sanjay Leela Bhansali made Saawariya, based on White Nights. The film marked the debut of Ranbir Kapoor and Sonam Kapoor. It is a story of Ranbir Raj (Ranbir Kapoor) who meets Sakina (Sonam Kapoor) on a lonely night and falls in love with her instantly. During the course of the next three nights, Raj and Sakina become friends, and Raj falls in love with her. However, Sakina is waiting for her lover, Imaan, who had promised her one year ago that he will come and take her the next Eid. Imaan does come, and Raj is left all alone. 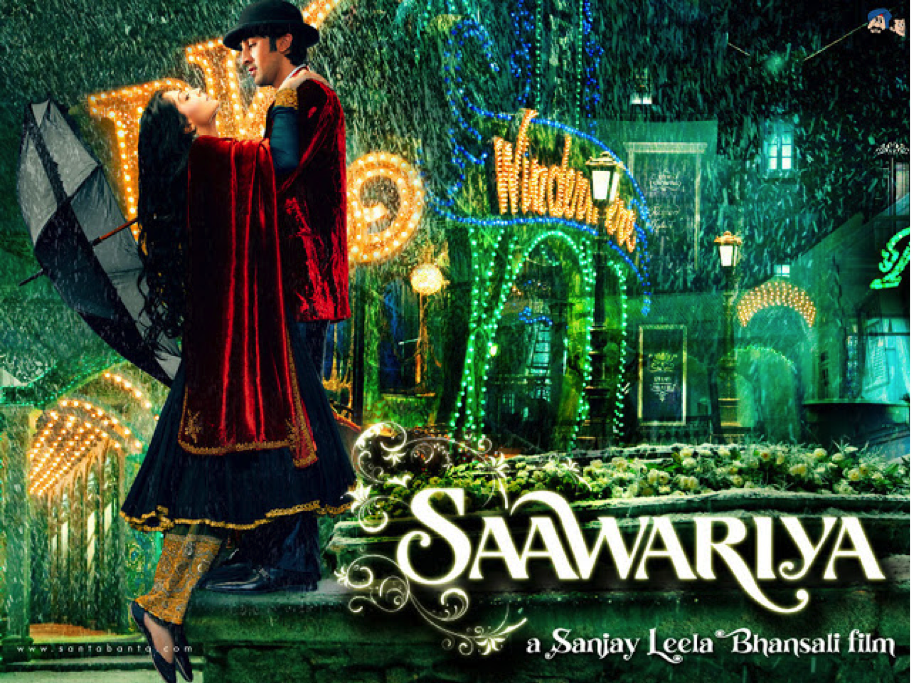 In 2006, Shivam Nair directed Ahista Ahista. The film credits the story and the screenplay to Imtiaz Ali and is another adaptation of White Nights. The film stars Abhay Deol, Soha Ali Khan, and Shayan Munshi in lead roles. The story centers around Ankush (Abhay Deol) who makes a living by acting as a witness at Delhi’s marriage registrar bureau. One day, a girl Megha (Soha Ali Khan) who has run away from her home in Nainital, comes to the bureau to get married to her love Dheeraj (Shayan Munshi). Due to unknown reasons, Dheeraj does not show up at the registrar’s office. Megha is left dejected, and is forced to take Ankush’s help. She is able to find a job, and realizes her full potential. Ankush, too, is able to find a new job, and makes a decent income. A relationship develops between Ankush and Megha. But, as fate had it, Dheeraj returns. He explains the reason as to why he went missing. Megha believes Dheeraj’s reasons and decides to get married to him, while Ankush becomes a witness to their marriage. Interestingly, in 2007, Imtiaz Ali made Jab We Met that also had shades of Ahista Ahista, where Geet runs away from her home to marry Anshuman, who refuses to marry her. Aditya is grateful to Geet for helping him understand the meaning of life when he was going through a difficlt break-up. He helps Geet to get her life back after she is rejected by Anshuman. He falls in love with Geet. However, Anshuman comes back, and Geet is willing to forgive him. But, unlike Ahista Ahista, Geet finally chooses Aditya and not Anshuman. 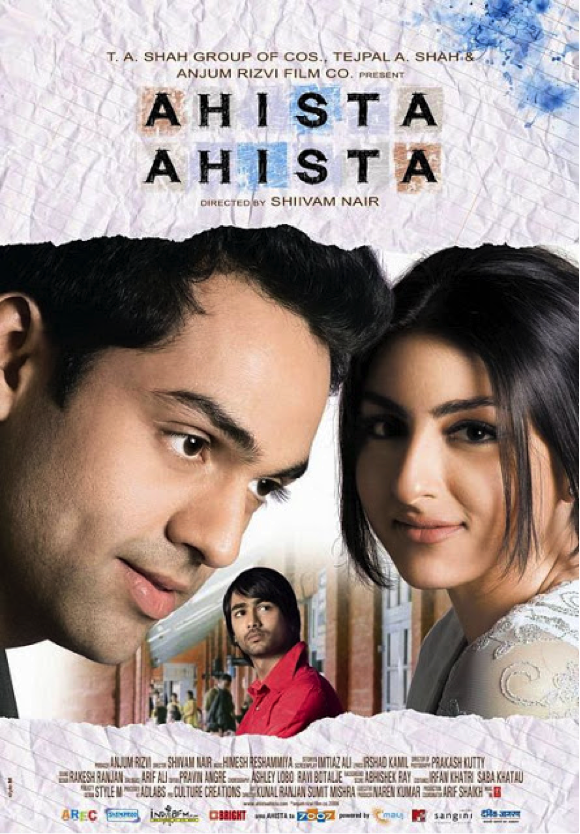 In 1960, Manmohan Desai directed Chhalia. The film starred Raj Kapoor, and Nutan in lead roles. Manmohan Desai was only twenty-four years old when he made his directorial debut with this film. Based on a real-life incident, and Dostoyevsky’s White Nights, the film was written by Inder Raj Anand, father of actor-director Tinnu Anand, and grandfather of director Siddharth Raj Anand. Chhalia is the story of Shanti who is married off to Kewal on the eve of Partition. She is left behind after the families move to Delhi, and is forced to stay with Abdul Rehman. When she returns to India five years later with her son, she is welcomed by the husband, but he disowns her when the child identifies his father as Abdul Rehman. Shanti tries to commit suicide, but is rescued by a Chhalia who eventually falls in love with her. Chhalia brings about a rapprochement between the estranged couple, and walks away from his love. 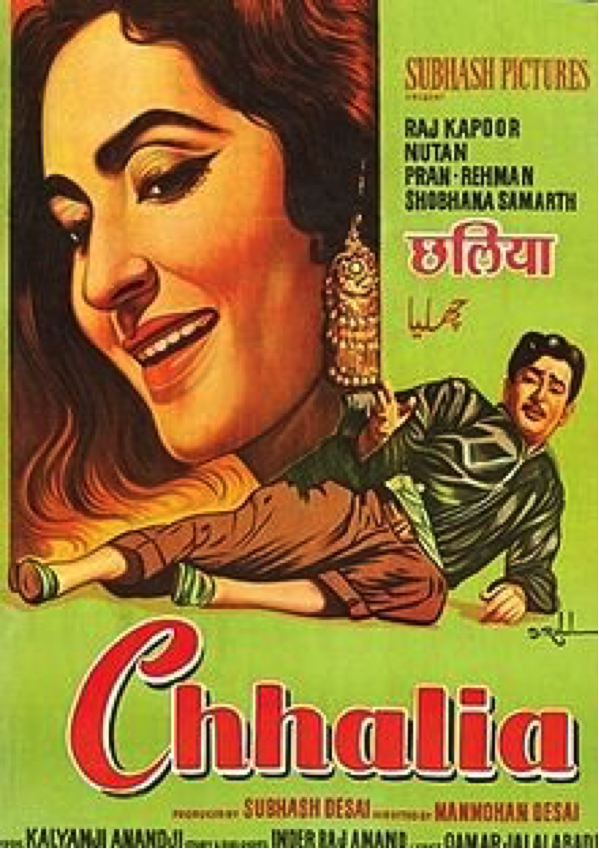 Anurag Kashyap claims to be inspired by Dostoyevsky, and the characters in his films inhabit a world similar to Dostoyevsky’s. In an interview, Kashyap recalls the effect Dostoyevsky had on him. He said, “Even the Dostoevsky characters are morally screwed. It [Notes from Undergorund] knocked me out completely. I couldn’t believe what I was reading, that a world view like this exists. Camus and Dostoevsky were writing about down-and-out characters who lived by their wits and who derived their philosophy through struggle.” Dostoyevsky’s stories comprise themes, such as guilt, angst, conscience, power, dominance, submission, and existentialism. No wonder, it has inspired filmmakers to capture the beauty of the human complexity on the screen. As he said, “Beauty is mysterious as well as terrible. God and devil are fighting there, and the battlefield is the heart of man.” The heart of the man—the one subject that never ceases to surprise and inspire.

[Read more of the author’s work at his blog: http://dichotomy-of-irony.blogspot.in]