Edgar Wright’s new offering is the definitive multi-genre experience. It’s probably the most rip-roaring and exhilarating action blockbuster since George Miller’s ‘Mad Max: Fury Road,’ but also one of the sweetest, emotion-charged off-beat musicals ever made. It feels like it’s set in a groovy and neoteric yet old-school world alternate to Winding Refn’s ‘Drive’ (2011).

The ride begins with an exciting opening heist sequence, except we don’t see the heist. This film is of course, about the getaway driver, Baby (Ansel Elgort), a baby-faced music-loving badass who happens to be the slickest and most experimental driver in the business. Baby waits back in a foxy Subaru WRX, whooping it up and singing along to ‘Bellbottoms’ by ‘Blues Explosion’, immaculately making the vehicle sway back and forth and moving the windscreen wipers to the rhythm of the music till his team hop back in. A stupendously realistic car chase follows, which sets the tone and gives you a taste of what you’re in for.

Every action sequence, whether it’s a car chase or on-foot, is flawlessly constructed and edited to look sleek and polished. Wright unleashes the hidden action genius within him. He clearly knows that a chase sequence shouldn’t just be various snippets strung together. The car stunts are undoubtedly ingenious and original, with a persistent sense of urgency and danger. You feel like you’re in a ‘Grand Theft Auto’ game, but instead, your ‘hotshot video-game expert friend’ (*cough* Baby) is at the wheel.

Like in ‘San Andreas’ or ‘Vice City’, the cops continue to outnumber Baby and the crew with every star added to the ‘WANTED meter’. However, Baby here is a walking cheat code (or driving?) in the flesh and blood. He drives and runs from the fuzz like a dream. The film is assembled around this central character, and so Baby’s  unique character development ultimately leads to an emotionally enhanced experience during the action. You constantly worry about him whenever he’s in peril, because deep down he’s a tender and meek young man who has been forced into the world of crime. You notice how Baby palpitates in shock and stares for a brief moment at the bodies of innocent guards and bystanders before speeding away from the crime scene. 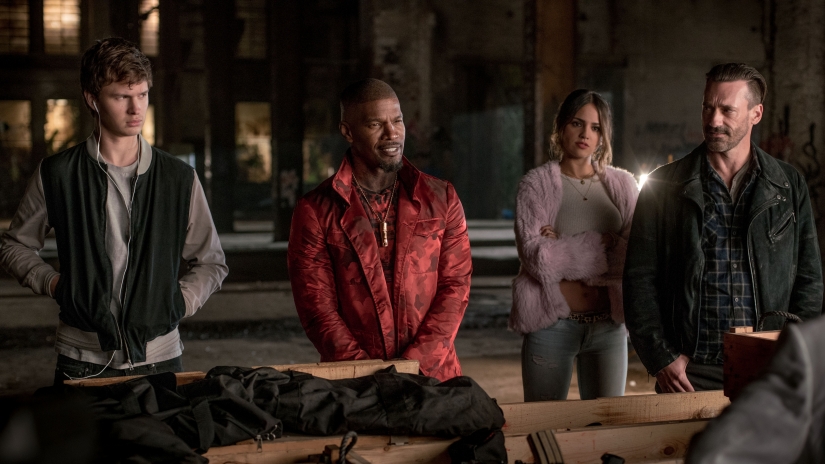 Things go deliciously Chazelle when Deborah (Lily James) crosses Baby’s path, in a fancy and classic diner setting. They’re drawn to each other by the power of music, and discover songs named after them. He presents ‘Deborah’ by T.Rex to her at a laundry store, where even the washing machines seem to whirl to the jingle. Their love track is perceivably vintage, ideal and very old-fashioned. They don’t text each other  and she doesn’t carry a cell phone. Baby always calls at the diner. However, their sweet exchanges change into a covenant between each other to embark on an eternal cross-country retreat with nothing but the road and their music, when Baby is stuck in a mess of a heist. It’s particularly fascinating to see their chemistry evolve from a Mia-Sebastian-esque cherry-blossom romance to an on-the-run Bonnie and Cyde escapade (but they’re obviously nicer people and not terrorising killers).

By the end of the second act, you think you’ve got it all laid out in front of you. You expect Baby to go up against the big crime boss like John Wick in a car, but that’s when Wright astounds you with the quality writing and plotting that made his Cornetto Trilogy and Scott Pilgrim so memorable. He designs a sticky haywire situation for the two leads, filled with tension and vengeance, making the finale a bombastic adventure in itself.  Coming to the murderous crew members, Jamie Foxx is the most hysterical one, with some of the funniest lines in the film. He’s Baby’s necessary evil (a devil always dressed in red) and the hurdle in his story.

Kevin Spacey is his usual self, which is not a negative at all. Jon Hamm delivers a nuanced performance even in his limited screen-time. The heist crew is everything the Suicide Squad should have been. Their conversations and confrontations feel like a good ol’ Mexican standoff with words (the bullets fly only in the end). In fact, Eiza Gonzalez is as much of a Harley Quinn as Margot Robbie was, even in her small role.

Although, Ansel Elgort and Lily James have brilliant chemistry, they’re no match for film’s coolest romance, which is between the music and the perfect editing. The most pivotal supporting character in the film, is of course the addictive soundtrack (over 30 songs!). At least three songs are going to stick with you long after you leave the hall. I consider any OST a huge win if I go home and download it all. The songs which I particularly loved were ‘Egyptian Reggae’, ‘Easy’ and ‘B.A.B.Y’. The editing (Edgar Wright’s love child, which has graced all his  films) phenomenally compliments the music with clever scene transitions and actions like slamming doors and firing bullets made in sync with the beats of tracks like ‘Tekillya’ and ‘Bellbottoms’.  There’s even a mind-blowing one-shot sequence, choreographed to ‘Harlem Shuffle’ where Baby buys coffee. It’s dazzling cinematic excellence!

Again, where Wright doesn’t go wrong at all is the glossy imagery and visual humour. The invigorating bumper car/arcade game style climax is so smartly lit. Blue lighting for Baby’s face (symbolising GOOD) and red for the baddie (symbolising evil of course). There’s loads of tiny details and gags that you can spot on multiple viewings (Read:Jon Bernthal). Also, ‘Easy’ by Sky Ferrera is played twice in the film and for VERY good reason but alas, a closer look would mean, ‘spoilers’.

In the end, ‘Baby Driver’ is a killer work of  cinematic pop art. It’s the best big screen experience of the year and shouldn’t be missed.