[This was part of the IFFI 2015 daily newsletter, of which the author was the editor/curator]

A long line of festival attendees assembled outside the Maquinez Palace’s Auditorium-I in the middle of the afternoon. A substantial number of people had formed a separate queue near the door of the auditorium, too (including a young man on wheelchair) — ones who hadn’t booked tickets for the event, hoping that there would be some empty seats in the auditorium after the pre-booked attendees had taken their seats. The air was so thick with anticipation that you could jab it with something sharp.

The screening of an acclaimed movie at a film festival isn’t immune to this hysteria, but not a masterclass.

And yet IFFI attendees had shown as much attention to this masterclass as they would have to a film. Because when the cinematographer of a recently released visually striking film, simultaneously shot in Tamil and Telugu (and dubbed in Hindi, Malayalam, English, and French), which garnered more than Rs. 600 crore worldwide is willing to speak about his craft for more than 90 minutes, the least that a knowledgeable film festival audience can do is show up to listen, and it did exactly that. An almost full house greeted Baahubali’s cinematographer, K. K. Senthil Kumar, as he came on stage looking dapper in a black suit, wearing leather shoes and small earrings.

“I feel a bit nervous and excited, because legends have spoken before me in this masterclass session,” began Kumar. “In recent times, a lot of films have been made with VFX [including Baahubali], and today I will try to show at least a bit of my work and tell you how it all happened. With the advent of VFX [visual effects] and digital cameras in films, the role of a DoP (Director of Photography) is often discussed — does he play the same role as before, or has it been diminished? Also, how much does the DoP need to know about the VFX and latest technology? I feel that time changes for the better all the time; we can’t escape development. VFX haven’t made my job easy; they have made it complicated, as now I am involved in the film right from the scripting stage till the end [post production].”

It wasn’t difficult to gauge that the audience, including this writer, was primarily interested in how Kumar shot Baahubali. Kumar seemed to know that, too, and given that he only had 55 more minutes to finish his talk, he got into the heart of the masterclass right away. “The preparation for shooting Baahubali was interesting. So, for example, the waterfall sequence: now, there’s no waterfall like that anywhere in the world,” he said. “The waterfall’s height in the film is supposed to be 3,000 feet.” (The highest waterfall in the world, Angel Falls, stands tall at 3,212 feet.) S. S. Rajamouli, Baahubali’s filmmaker, shot the sequence at Athirappilly Falls, in Kerala, which is 82-feet tall. But more than simply making the waterfall look imposing and intimidating, Rajamouli wanted it to “look lyrical,” said Kumar. “A straight waterfall wouldn’t have looked nice; we wanted it to have a base, a well-defined structure.”

Before playing a song from Baahubali — where the film’s lead, Shivudu (Prabhas), chasing the heroine, is trying to climb the ginormous waterfall — Kumar showed us something that he called “pre visualisation”: a small animated clip that unfolded the songs’ sequences. “Before shooting the song, we made this animated sequence, because we wanted to know what we could have shot in real life, and what through CG [computer graphics].” At one point in the song, Shivudu stands on the ledge of the waterfall, presumably at the height of a few thousand feet, contemplating his huge jump. “When we shot this scene, Prabhas was standing at a height of around 20 feet; we could have made him stand on a two feet-wall, too, but when you are on a considerable height, your body language changes. We wanted to see strains on his body and face.” Kumar then cut to a photograph that showed how this scene was shot: On the left side of the picture stood Prabhas, elevated with the help of a longish platform; on the right side of the frame — separated by a big rectangular green screen — Tamannaah, calling out to the hero, near artificially created rocks. “My director, the production designer, and the visual effects coordination guy had long discussions about this scene. We first calculated the distance [between the two portions of the waterfall], and then put a set.” 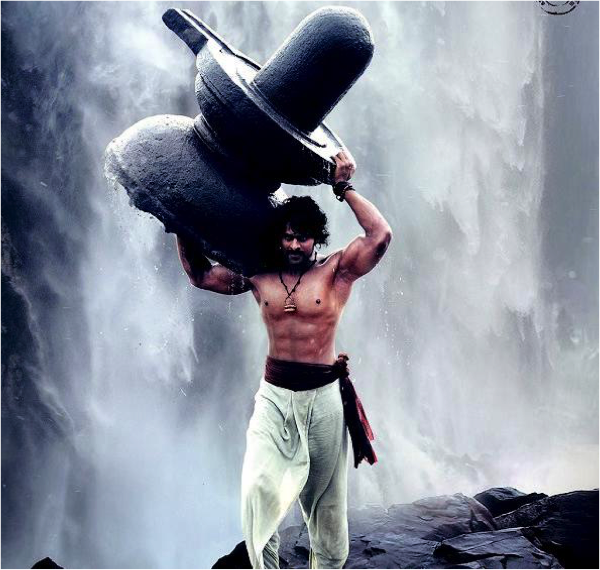 Kumar then talked about how the Mahishmati Kingdom’s durbar came into being. “We knew how the Kingdom’s durbar should look like, so we first made its graphical layout. We didn’t want to make a set for the entire durbar, because putting up a set that big is very expensive.” The graphical layout gave way to “Durbar hall concepts and illustrations”, whose pictures Kumar showed on the big screen, which finally lead to an artwork. “A lot of artists were working on it, showing the exact locations of the different characters in the scene. But an artist putting pen and paint on paper is very different from making that artwork come to life. We hadn’t done the storyboarding for this portion, because there was no action. And when we shot, this was the final result.” The big screen, displaying powerpoint slides till now, then showed a scene from the film, where Sivagami (Ramya Krishnan) strides into the durbar, a baby tucked in her arm, and with Kattapa’s help, kills the renegades in her army.

“We initially wanted to shoot the war room sequence [where Baahubali and Bhallala strategise ways to counter a rival army] in the night, but while shooting a battleground scene, where a big red curtain is used as a weapon [that covers scores of Baahubali’s enemies], we realised that red looked really vibrant and beautiful,” said Kumar. “So the whole idea changed then: We moved the war room to the battleground, with red-coloured tents, and sunlight coming from the tent’s cloth, so that the whole thing becomes red and looks dramatic. And since the whole area was lit through a curtain, I used a cloth in front of the lens to replicate that effect. The initial idea was completely different, so you don’t need storyboards and concept art at all times. When you are being creative, you have to take liberty. We really liked what came out of it; I am not really sure if a lot people liked it, too.”

Talking about the film’s most significant portion — the war sequences — Kumar said, “We had to find a location that could physically accommodate 20,000 soldiers from one army, and 1 lakh from the other. We found one using Google Maps; we took individual pictures of different portions of the battlefield, and then stitched them together [physically] to create a big photograph of the location. And then gave it to an artist.”

Kumar also spoke about the choice of his principal camera to shoot the film. “I used an Alexa XT,” he said. “And it stood up to all the challenges, from Hyderabad’s intense heat to -10°C in Bulgaria to a very rainy Mahabaleshwar.”

When the floor was opened to the audience, Kumar was asked about the challenges of Baahubali 2, given the first one’s been very well received. “I didn’t expect the first film to be so successful. Now the real challenge is to take it to the next level. However, as a DoP, I am disappointed by a lot of things in Baahubali. There are so many scenes where there are keying mistakes (the CG looks fake); there are issues related to depth of field; there are motion blurs. So we are trying to rectify this problem [in Baahubali 2], so that we get a slicker image. Also, the film’s first part was just an introduction. The second part is really the core story. Ultimately, cinema is about the emotional content, about storytelling.”

[The writer is an award-winning Indian film critic. His work can be found on his independent blog]