Why ‘Talvar’ was the most important film of 2015

Everybody has an opinion.

Sculpted through years of channel watching and newspaper scanning, personal verdicts flash through most minds. I had one too, before entering a screening of ‘Talvar’, written by Vishal Bhardwaj and directed by Meghna Gulzar. I sort of knew what to expect. As well made as Manish Gupta’s similarly themed ‘Rahasya’ was earlier in the year, it was always more of a sensationalist offshoot than an accurate version of events. You knew that you were watching a film that was easier to escape into than invest in.

I’m not a mainstream journalist, and my exposure to the infamous 2008 Noida Double-Murder case was limited to print headlines. Even as a passive reader, it was difficult to not be flabbergasted by the changing moods of official enquiries, and in turn, the media and the nation. Certain click-bait terms stuck with me – ‘Trial by media’, ‘Dentist murderers’, ‘Miscarriage of justice’. They all contributed to my conscious, yet increasingly callous line of thinking. I began to solve the case in my head. I was pretty convinced that the official investigators and teams were incompetent, driven by egos and deadlines, politics and bureaucracy. This isn’t entirely wrong, but the first thing this film displays is the sheer damage done by whims and sweeping generalizations.

Simultaneously, I couldn’t help but imagine a swift, painless outcome in a parallel fantasy world – where Indian media outlets report with utmost dignity. Everyone, including journalists who had actually cracked the case with their tireless and sincere inquests, including myself pouring over the details across various sources, had, in a way, contributed to the farce that it became.
And all through, a Delhi schoolgirl remained dead. For this reason, the effort to uncover the truth began to seem futile – that is, until an unwavering verdict was passed. Therefore, it’s odd to hear the term ‘closure report’ preceding the final judgment. You realize that this case – like the films and books it encompasses – will offer anything but closure.

Over the years, from the several gory descriptions, I had obviously painted a vague mental picture of the house, its geography, the colony and overall environment. Within the first few minutes of Talvar, even though I had never actually seen the flat, Ms. Gulzar’s mapping and interpretation matched mine. Not only did corridors, rooms and terrace staircases look exactly like I had imagined them, even the angles at which they’re shot at gave me a bunch of eerie déjà vu moments. I watched, with a sinking heart, as Konkana Sen Sharma and Neeraj Kabi – the parents – traversed the flat in different states of numbness. Even the weather and light looked familiar.
This is a triumph of vision, restrained and sure, and a seamless marriage of storytelling and documentation. Only, it feels like a dark funeral. It should feel like one. I, like many others, had visited this crime scene countless times. Yet, I felt very, very uncomfortable, but extremely secure to be back here, in the hands of competent artists.

Perhaps the most disturbing aspect is the sight and gait of the first inspector (Gajraj Rao) at the scene. He essentially lays the foundation and kick-starts the botched-up investigation. His apathy is made a bit too obvious through his paan-chewing and rude phone manners, but I saw myself in him. Many viewers may feel like him; not a clue in the world, not an inkling about official procedure, and yet passing impulsive theories based on ‘experience’. He is you and I – a cop, a media person, the bystander, neighbour and discerning viewer. By the time the last CBI investigation began (CDI here, just as the Talwars are the Tandons, and Aarushi is Shruti), I wondered if any clues were left in the house, or more appropriately, if a house remained after years of trampling and contamination.
In fact, I feel relieved when I learn that CDI joint-director Ashwin Kumar (Irrfan Khan) takes charge. He displays a firm grasp of a kind of passive-aggressive authority. Through his flaws and – I dare say – minor mistakes, he invites us to think like him, and react like him. He makes us laugh at his wryness, and then feel guilty about it. The only thing funny here is that he must find the need to laugh. We see his growing frustration and helplessness, and sympathize with him.
Imagine that – sympathizing with the numbed detective, instead of the victim and her family. 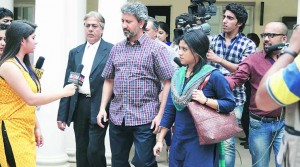 By going the ‘Rashomon’ way, with three contradictory versions of the same event, the filmmakers have managed to cover most bases of a convoluted 5-year long case – an astounding achievement in itself, thanks to some no-nonsense editing and winning performances.
However, casting Irrfan Khan and his persona as a protagonist – and victim – of sorts is a giveaway. The gentle probing into his personal life is a giveaway. The casting of theatre veteran Atul Kumar and his inherently smug expressions as the next CDI investigator is a giveaway. Sohum Shah’s moustache and grin as Ashwin’s assistant, Prakash Belawadi’s shrugging ways as Ashwin’s outgoing boss, Sumit Gulati’s (as the Tandons’ assistant) shifty face, and the importance (and screen-time) given to his narco-analysis test, even the background score – these are giveaways.
The filmmakers make their stance clear; they believe that the Talwars are innocent, and present a watertight case disguised as a riveting film. The way they juggle multiple narratives and procedural details, the way they nutshell the gloom of five long years into 140 troubling minutes – it shows an unshakeable belief of being not only filmmaker, but also a difference-maker.

A film stops being a film once it traps you in its withering atmosphere. It stops being a medium of escapism, and becomes a medium you can’t escape. Talvar is unforgiving, and especially uncomfortable if you find yourself nodding your head and smiling during a final confrontation between both CDI teams. It’s the singularly most well performed scene of the year, and tells quite a story about the so-called authorities in charge. It’s the sort of conversation that can’t just be made up, and yet, it’s something I’m willing to accept as a necessary fictional device.
It’s easy to notice the frustration of the makers, as well as their characters. All their angst, though, is channeled into a snarky debate that is important precisely because of how fruitless it is.

It’s perhaps no coincidence that the two most impactful Indian films of the year – Court and Talvar – present polarizing cases that critique the system and its people, instead of the other way around. It’s ironic that our best cinema is often the direct result of India’s most popular shortcomings. Court, an entirely fiction representation, is scathing because of its change-averse environment. Talvar, based on the most notorious true crime of our times, is scathing in its assessment of change. It examines the shape-shifting pride and prejudices of everyone consuming – and defining – the trial.

Unfortunately, the filmmakers’ victory lies in our awareness and education. The better their work is, the more depressing it gets. And even after that, nobody really wins.
I’m frightened for what lies in store ahead. The Sheena Bora case is still only just warming up, two years later, and I think we’re not quite equipped to face more inconvenient truths.