At one point in Kanu Behl’s severely grim dysfunctional-family tale, Vikram (Ranvir Shorey), the oldest and most vicious of the three brothers, reaches the end of his tether. He is frustrated with how naïve and – dare he imagine – sincere, the youngest, Titli (Shashank Arora) is, to even dream of an independent life. The middle brother Pradeep (Amit Sial), also the communication funnel between the two, outrageously suggests that they should get Titli ‘settled’. Perhaps they need a woman in the house to hasten the idealistic fool’s participation in their carjacking business. This idea is absolutely illogical, given that Vikram is going through divorce proceedings with his estranged wife – who was presumably ‘recruited’ earlier in life for the same purpose. Why invite trouble again? “Others are doing it,” Pradeep replies. Later on, the retired patriarch and ailing father (Lalit Behl) – who, the film discreetly suggests, is the man behind the grooming of these next-gen monsters – fondly proposes a ‘Vaishno Devi pilgrimage’ once they complete their final murderous assignment.

And these hideous ironies and contradictions, usually staples of the lower societal classes, are really what this film is about; how even the most regressive, oppressive, misogynistic and barbaric beings clutch onto strands of tradition (or religion, or divinity) as their pillars of rationalization; how life becomes a relentless circle of mistakes for those who forsake hope; and how freedom and family become mutually exclusive, yet fruitless concepts. 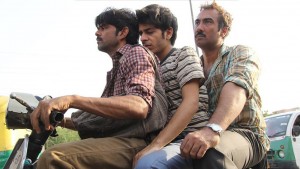 This is not a film where one can find inconsistencies in characters, their decision-making, thinking, behaviour or the overall plot. They’re governed by survival instincts and animal impulses that perhaps form the dark cores of rapists and serial killers. One doesn’t ask “Why?”. One only wonders “why?!” And there’s no singular answer. Good is just a lesser version of bad here, and even the more innocent-looking ‘victims’, like Titli and his reluctant wife Neelu (Shivani Raghuvanshi), repeatedly bear fangs sharpened by their unforgiving environment. If he beats her up, she still thinks he is decent because he is helping her escape this mess, and because he isn’t maiming or killing her. There’s no point wondering why she abruptly transforms from a frightened child into a delusional woman convinced of his exploitative scheme. There’s no point wondering why Titli is different from his brothers, or what kind of life he has seen to identify the line between decent and debauched. He probably doesn’t even know of this distinction, and, in a way, he is being disloyal and traitorous and scheming – all unsavory attributes he has inherited from them. There’s no point finding a method to any of their madness.

The film is just a portion, and perhaps the most crucial segment of their ongoing story. There’s no real beginning or end; we’re just thrown in and then yanked out of Titli’s decaying universe, like commuters on a horridly crammed Virar local. The experience is the same – claustrophobic, disturbing, clammy, nauseating and, eventually, a perverse kind of relief, the kind derived from seeing a poisonous insect survive a nuclear war. These actions aren’t repulsive for the sake of it; they’re real in the sense that you’re immediately reminded of the untold stories behind so many unfortunate newspaper headlines. And every hammer blow, broken bone and bruised eye seems perfectly reasonable within the realms of Behl’s primal universe.

The film’s strength also lies in its ability to simply glide over potentially show-stopping cinematic elements, as if they are almost inconsequential to the story. Things like ambiguous sexual orientations, domestic violence and even death are simply suggested in passing, thereby leaving us even more shaken by what routinely occurs behind open doors. They only add to our subconscious interpretation of this desolate world. 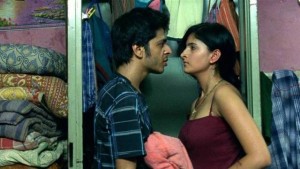 It’s not often that the wild landscape is the all-encompassing answer to every morally bankrupt gesture. But much like the opposite-spectrum Delhi saga ‘Aankhon Dekhi’, their existence and history is defined by the space they inhabit. Parul Sondh’s production design is perhaps the film’s most evocative character. Her spatial management of the messy, neglected family home – where each room spills it another like a maze of bad habits – is symbolic of their tendency to keep waiting, and working towards a better future. Till then, these dim tube-lit rooms resemble junkyards, and serve as places of rest. Also notable is the amount of time Behl spends on capturing their mundane activities – brushing their teeth, gargling, eating, driving and sleeping. Come hell or high water, cleansing and a basic source of nourishment are never compromised upon. As is the Indian way, much passive aggression is displayed over pieces of paratha and chicken.

Pritam Das’ sound design captures the essence of a region perpetually in various stages of noisy development. Karan Gour’s string-heavy background score is the only obvious sign of the narrative tone, but its sparing use also pinpoints phases of Titli’s psychological journey.

Ranvir Shorey has always been an underrated actor. This terrifying ticking time-bomb act of his – one that makes conventional baddies look like playful pandas in comparison – lays bare the consequences of an abusive childhood, broken dreams and misdirected anger. Amit Sial’s menace lies in his omnipresence, while young Shashank Arora internalizes the perils of suppression. He has this fragile Jesse Eisenberg-ish gait about himself, but can just as well switch gears into a deformity of this lived-in territory. Perhaps his blossoming can be attributed to casting director Atul Mongia (LSD, Shanghai, Queen), who has shaped the film’s stifling atmosphere with his side characters. My only grouse is the underutilization of Sumit Gulati (Talvar), who deserves more than his bit role as a Meerut fixer-upper. His shifty face doesn’t quite let Titli view him as an embodiment of hope and escapism.

It’s no coincidence that reel villains – the ultimate impersonations of evil – often go down as the more memorable cinematic characters. There’s something about watching them gleefully distort the perception of civilization. As viewers, our fascination stems from our unfamiliarity with them. ‘Titli’ is a very good film about these people. Only, here, they’re not self-aware, and so frighteningly familiar. And there’s no hero in sight to fight them.