A Shahana Goswami-Barun Sobti film recently made news for topping the MAMI MFF 2016 audience poll of the most anticipated films to watch at the festival. It beat out the more popular Indian titles like Konkana Sen Sharma’s A Death in the Gunj and Alankrita Shrivastava’s Lipstick Under My Burkha. People took notice, and gradually, writer-director Milind Dhaimade’s (co-wrote Hulla) resourceful little feature-length film began to step into the limelight.
After all that buzz, it now plays in the ‘India Gold’ section at this year’s Mumbai Film Festival.

SNEHITA KOTHARI chats with the articulate filmmaker about his film, his process, perceptions of parallel and mainstream cinema, and much more: 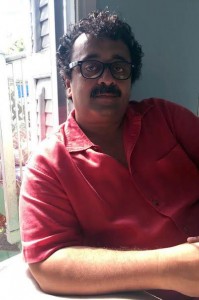 What is Tu Hai Mera Sunday essentially about?

Tu Hai Mera Sunday is about a bunch of weekend footballers who find their Sunday football space snatched away. For them, the Sunday ritual is more than just about football. It’s an occasion and place to vent from their pressure cooker life. Each of the men is now left to face their world to their own devices, each one with his own unique set of challenges in the city of Mumbai. The film is about space, emotional and physical, set against the backdrop of Mumbai.

How do you think a constantly growing lack of space in Mumbai is affecting our psyche?

In society, the symptoms of bigger maladies like aggression, intolerance and fundamentalism are rooted in smaller afflictions like lack of space. Especially today, modern India is chasing materialism with such gusto that even things like hobbies and passions need to have some bonus rewards (academically or monetarily). We’re proud of our high-rises, and construction has become a benchmark of our growth. It’s as if the loss of personal space has become a measure of prosperity. In a situation where space (emotional or physical) — which is should be a fundamental right — becomes a luxury, you will find people doing everything possible to grab it, even snatch it if needed.

How did you get the idea for the story?

The seed of the story comes from these bunch of guys called “Juhu Beach United” who play football at Mumbai’s Juhu beach every Sunday. Most of the players are working professionals from different fields. They play for no reason. They play hard and with full passion. So one day I thought — what would happen to these guys if they couldn’t play football at Juhu beach and had to look for an alternative place in this growing city?
To this I then added characters from my life, and the camaraderie I shared with my friends. I took various instances from my life, then mish-mashed everything to create an interesting piece of fiction.

How much do you think the kind of cinema one loves subconsciously affects his/her filmmaking process — be it in writing or otherwise? Can you tell us about your influences?

I think good cinema inspires us all to better our craft. But one has to find one’s own voice. That’s the tricky part. The minute you emulate what you love, it becomes derivative or disingenuous. Which is why I try to draw inspiration for everything I write or film from life, and not from cinema. So yes, there are some incredible filmmakers whose work I love, but I would take extra efforts to keep their influences out of my work.

If there is any aspect that you could change about Mumbai, what would it be?

Where do I begin? Where do I begin? I don’t think any change is possible without a strong political will. But nonetheless, not just Mumbai, I just would wish every Indian would develop a strong civic sense and take efforts to keep their environment clean. We have great sense of nationalism but very poor civic pride.

Off late, we have seen filmmakers merging lines between parallel and mainstream cinema. Do you see yourself belonging to a similar space? How do you manage to keep it entertaining/interesting despite a realistic setting?

Yes, I think a lot of filmmakers today who have grown up on a heavy diet of Bollywood and international films are filtering these influences with their own sensibilities, to create a healthy mix of intelligent, entertaining and unpretentious cinema. I don’t know why the word ‘real’ is taken as the opposite of ‘entertainment’. Real is not just about depiction. It’s about making something come alive. Commercial cinema fails because it feels it should only be ‘entertaining’. And art house cinema fails because it feels its job is to ‘depict’. I think if you stop thinking of ‘real’ and ‘entertaining’ on opposite ends of the spectrum, then a lot of things can fall in place. For me, real is being convincing. If a story is convincing it can reach out to the audiences. When it has a personal perspective, it entertains. Having said that, one should also realise that it’s impossible for all films to appeal to all the people all the time. When filmmakers worry about audiences, it could be disastrous.

Do you think audiences of today are done with over-the-top melodrama and want to see films akin to their life setting?

Maybe. It’s really difficult to generalise anything. I think the audiences’ taste for cinema might be like their taste for food. People are in the mood for different things at different moments. So filmmakers need to keep pushing the palette. I don’t think audiences make better films, I think filmmakers can make better audiences.

Please elaborate if you found any change in your story from writing to shooting in real space, and finally connecting the chunks on the edit table.

Oh, yes. Plenty of things changed and got turned around. Some of the writing got challenged when I started doing the shot breakdowns. Some things got tweaked when the actors came on board and we were doing rehearsals. Sometimes even a location added a few changes in the script. But it was on the editing table that things really turned around. Scenes were shuffled around and some context also changed. I think independent filmmakers need to develop three personalities: Bramha. Vishnu. Mahesh. Brahma creates. Vishnu preserves the context. And Mahesh destroys the fluff.

How does an independent filmmaker go about marketing and finding distributors after making the film?

Since this is my first film and we’re total outsiders, my knowledge is kind of limited. For us, the NFDC Film Bazaar helped tremendously. In fact, it propelled our film in the right direction. I would definitely urge all independent film makers to explore this one avenue. They have all kinds of programs; from script labs, to co-production markets, to even work-in-progress labs. And they do have really influential and highly experienced people from across the world coming there. That’s definitely a great place to check out. As far as distribution in India goes, we’ll let you know after we find out. My one piece of advice to all independent filmmakers though is to make sure to understand the significance of marketing the film while raising funds.

What do you enjoy more? Writing or direction?

Direction. There’s no greater joy than putting a film together. What I love most is the collaborative nature of it. So many people coming together, all collectively working to create something great. I love the energy of a shoot.

What is the one prime reason the viewers should watch out for your film at MAMI?

To know how a film can be ‘real’ and ‘entertaining’ at the same time.