You’d recognise actor Akshay Singh for his bit roles in many mainstream films over the years. There’s more to him than just performing in front of the camera, though. He writes, directs and produces, too, and his Banaras-based film, PINKY BEAUTY PARLOUR, will now screen as part of the ‘India Story’ section of Jio MAMI Mumbai Film Festival 2016.

Snehita Kothari sits down to speak to him about his film, its purpose, skin-prejudices in our country, the messages he wants to give through cinema, Banaras and some more: 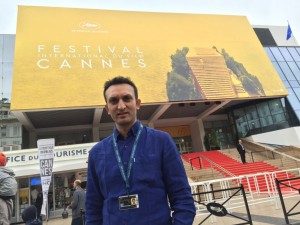 Tell us a bit about your background. How did you get into films?

I belong to a small town called Ghazipur near Banaras in Uttar Pradesh. As far as I remember, I always wanted to be in the movies. As a kid, I used to write skits which were performed at school events. They were actually spoofs of Hindi films. During the first year of graduation, I started doing theatre in Sri Ram Centre For Performing Arts, New Delhi. Then I shifted to Mumbai to try my luck in acting, and very soon got a break in television shows and then to feature films as well. My last release as an actor was Sunny Deol’s Ghayal Once again. In the meanwhile, I had started writing scripts for television and films like Baat Bann Gayi starring Ali Fazal and Gulshan Grover, where I also played one of the central roles. So writing and acting was happening simultaneously. I’ve always wanted to direct, so instead of searching for an opportunity, I created one, by directing my first feature – ‘Pinky Beauty Parlour’.

How did you stumble upon the idea to make this film?

Pinky Beauty Parlour is a poignant tale of the repercussions that our obsession for fairer skin has on a human mind, families and society in general. The film takes us on a touching journey of two sisters’ lives, Pinky and Bulbul, who run a Beauty parlour in one of the by-lanes of Varanasi, the holiest of cities in India. My film is inspired by real life incidents and stories, some of which I have witnessed very closely and have been deeply affected by. Someone very close to me went into depression because she couldn’t become fair even after applying fairness creams and trying all sorts of other stuff. All these observations had left a deep impact on me. And as far as my knowledge goes, no full-length feature film has been made on this issue, which finally went on to motivate me to make this.

How does your film challenge this regressive mindset?

My film basically explores the side effects of our obsession with fairer skin on a human mind, and relationships in particular. It questions the colonial hangover on our mindset that is conditioned to value fair over dark and dusky skin tones. Skin colour bias is something we are taught and not born with.

Can you tell us about the #letsunlearn campaign, an initiative by ‘Pinky Beauty Parlour’?

This Pinky Beauty Parlour initiative is to make people aware of all the myths and superstitions that we have unknowingly learned. It’s not the colour of the skin, but the colour of our thoughts that need to change. 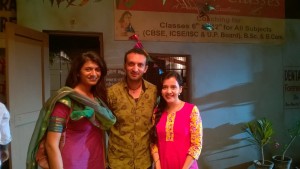 Dealing with such a subject, was it difficult to refrain from becoming preachy at some point?

Yes, it was. I had researched so much that I had to refrain from sermonising. As a filmmaker, I feel that it is my duty to entertain the audience. So I have tried to put my point across via dark humour and satire. The locations, situations and the characters are very real, but the treatment of scenes is entertaining. It will always keep you at the edge of your seat. The narrative is very engaging, quirky and entertaining, at the same time, the film has a timely message for the audience to chew on. I personally feel that any message with a pinch of humour and entertainment is far more impactful in a country that is slowly learning to chuckle at itself.

Why did you base this film in Banaras?

During my research while writing the script, I realised that small towns in India like Banaras are flooded with beauty parlours, and people there are very conscious about their looks and particularly the complexion of their skin. There are parlours almost in every lane and street of that city. And since my native place Ghazipur is near Banaras, I felt I could imbibe the characteristics of the city in my film well. And it has turned out to be very colorful and culturally rich.

How much of it is drawn from your own life?

Every form of performing arts is an artiste’s expression. Films stem from personal experiences. I had noticed around me since childhood how people with darker skin tones were made fun of and not considered beautiful. I have noticed how equations between family members and relationships get affected. The incidents in the film are inspired from real life, but the story is totally fictional. During my research I came across horrifying stories. I have research material of more than 250 pages, which includes news articles from the internet, one-to-one interviews with random people affected. This prejudice is very deep-rooted in our society. As a filmmaker, I chose to highlight this issue by making a film. Because cinema is one of the most influential mediums to address any issue. 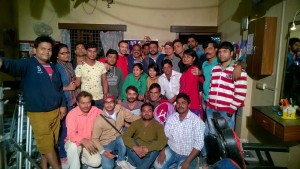 Please describe the process of making the film — from scripting to shooting and post production.

It took me almost two years to research and write the script. I must have written almost 20 drafts of the script. During the development of the script, I had started meeting people to make the core team. The process of finding a producer was taking a bit too long, so I decided to do a test shoot for the film. For that I picked up some sequences from the script and weaved it into a short-film script, which was the essence or summary of ‘Pinky Beauty Parlour’. All the cast and crew came on board as they all loved the script and wanted to be a part of it. The test shoot went really smoothly, and now we had a teaser in the form of a short film. I met few producers and showed them the teaser. They all liked what they saw, but were taking time to decide. So my wife Bahnishikha Das and I decided to produce the film ourselves. That is when we formed our production house, Akshikha Entertainment, and invested all our savings in the making of the film. We shot the whole film in and around Banaras. According to the crew, shooting this film was like a family vacation. I loved all the roles that I played, that of a writer, actor, producer and the director. In fact, few of my crew members jokingly called me a “split-personality”, because according to them I could very easily shift from one role to the other. I took it as a compliment.

How did you go about casting for the film?

Since the characters were inspired from real life, the description of the characters was very clear in my head. I had to use all my resources to hunt for the right actresses for the two protagonists, especially for the role of Pinky, which Sulagna Panigrahi finally played. When I met and had a long chat with her, I immediately realised that this was my Pinky. For Bulbul, the elder sister’s role, I always had Khushboo Gupta in mind because I had worked with her and I knew how talented she was. I had to make the actors comfortable during the auditions, which were more of improvisations actually. Even I used to play a part and perform with them. This would give me an insight about the actor’s presence of mind. Then we had parlour-training sessions for the actresses with an expert beautician to get the nuances right and make them look like professional beauticians. 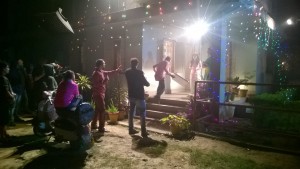 How do you go about marketing and finding distributors after making the film?

There is no fixed formula for that. I think getting selected at prestigious film festivals gives a push to the film, where it comes into the notice of distributors for theatrical and other platforms. And today we are lucky that we have many platforms to screen our films besides theatres. Digital platforms like Netflix, itunes, Youtube, Amazon, VOD’s etc. are a blessing for independent films and makers. One needs to create an awareness for their films and bring the film to people’s notice, because people are always hungry for good stories. There is something for every type of audience.

Does it bother you that festival films do not generally have a viable commercial market? Do you see the game changing in any way?

Things will definitely change. But a lot depends on the kind of films that are made — the subject, treatment and the way these films are marketed and distributed. Audience wants to see good films, provided they are also entertaining. Films like The Lunchbox and Gangs of Wasseypur have been favourites at the film festivals, and have also done well at the box office because of their content, quality and their treatment, not their pre-conceived labels.