The international short-film anthologies playing at this year’s Mumbai Film Festival include Madly (one of which Anurag Kashyap has directed) and In The Same Garden (one of which Gurvinder Singh has directed), and the Marathi omnibus Bioscope, which plays separately in the new ‘Marathi Talkies’ section.
There’s only one Hindi-language anthology (if one doesn’t count the Dimensions Mumbai competition) selected, and premiering, this year as part of the new ‘Spotlight’ section: Shor Se Shuruaat, made up of seven unrelated shorts by seven upcoming filmmakers/assistants, who are in turn chosen by renowned filmmaker-mentors Mira Nair, Nagesh Kukunoor, Imtiaz Ali, Shyam Benegal, Sriram Raghavan, Zoya Akhtar and Homi Adajania.

Shor Se Shuruaat marks the 4th year of Humaramovie’s annual short filmmaking competition, Shuruaat, a festival that showcases an anthology of short films based upon a common theme. In 2014, the 8-part Shuruaat Ka Interval (theme: interval) was released commercially in cinemas.
Talking at length about Shuruaat, and unraveling the interpretation of this year’s topic, “Shor”, are co-founders of Humaramovie, Preety Ali and Vinay Mishra.

Preety Ali: About 4 years ago, Bosco Martis, of Bosco-Caesar fame, had approached Imtiaz Ali with regards to the ‘Wassup Andheri Film Festival,’ and that was the time we had started Humaramovie. That’s when the idea of doing a short film competition struck me. I wondered if I could utilise the goodwill that I had created in the industry. The two people we then got on board were, of course, Imtiaz Ali and Anurag Kashyap. And the first year turned out to be a success.

Vinay Mishra: Shuruaat was taking ahead an opportunity that came our way. We thought of what we could do for these young filmmakers who had not got their films into the theatres and really wanted it out there. So we thought of getting their films a theatrical release. One of the things about Humaramovie is to find the next generation of talented artists. We are very comfortable that the next big talents in India will be from the group of people we have worked with, be it in Shuruaat or otherwise.

What do you think is the USP of this competition? And why is it titled Shuruaat?

VM: The filmmakers who have worked on Shuruaat are young directors who haven’t had the exposure and are on the threshold of becoming large; we are getting them out there. It’s “the beginning” of sorts. They are all making a film on a single subject with their own interpretations. You will see that they will have an individual stamp which will start from here — and that’s why we’re calling it, “Shuruaat.” 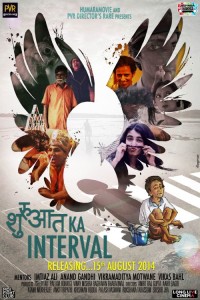 What difference do you think does mentoring bring about?

PA: So many people come to Mumbai to make their films, but what they make does not turn out to be great. Hence they need to be mentored by someone who has already made a mark in the industry. There is a lot of expert advice that goes into it, which brings about a tremendous difference.

VM: There are lots of filmmaking competitions, but we realised that these don’t dish out good films unless there is some hand-holding involved. You can get lucky and get a great film, but typically you need somebody who has gone through the rigmarole of actually making films to make something competent. If you go to film institutes, you will observe that it is only after a period of time when the filmmakers have been seeded in the whole environment and learned the whole space, that you get decent films.

The theme for this year’s competition is “Shor.” How have the filmmakers interpreted it this year?

VM: Filmmakers have come up with their own unique interpretations for “Shor” — as a freedom of speech and how noise or lack of it impacts it; how noise impacts someone who is hearing-impaired; how people who cannot hear extreme noises or visuals deal with it; a man’s craving for noise while he is confined to a silent world; how different interpretation of noises cause abject commercialisation in this world; how a new world full of structure and stricture impacts people and sound; how social media with its noise encumbers you in some ways and also sets you free.

Why should viewers watch out for this anthology?

PA: It is very interesting. We started it as a competition, so filmmakers have come up with their own unique ideas. I am sure people will enjoy it just as they enjoy a book of short stories. Also I feel that each story represents its mentor — some in theme, some in language and grammar, some simply visually or tonally. The assistant’s work is reflecting on the kind of films their mentors often make. And we all know about each of the mentors’ filmography — exemplary and versatile, to say the least.

VM: I think people should watch this because it is different. All the films have an extremely personal touch, are very innovative and are very much out there in terms of trying to breach boundaries. If it wasn’t done in this way, these stories would never be told. But these stories need to be told because they are primary representations of their craft and voices.