Chauthi Koot (The Fourth Direction), one of two Indian films at Cannes ’15 and the National award winner for Best Punjabi film, is a sleeping beast of moving pictures — a rare instance of an experience feeling far more heavier, and immediate and effective, only in hindsight. Gurvinder Singh, its director (whose first film was the more abstract and equally minimalist Anhey Ghorey Da Daan), seems quite happy to let you probe and search restlessly for his story’s underlying fear and paranoia. Something is always around the corner, and yet this film feels like an inescapable, corner-less and open room of walls closing in.

Chauthi Koot is set in rural Punjab in the ’80s, coinciding with the aftermath of the infamous ‘Operation Blue Star’ during the peak of the Sikh separatist movement. A few radio news snippets aside, these historical details of the riotous outside world need not be specific; Singh’s primary goal is to make us imagine and feel the fidgety atmosphere — one that is irrevocably connected to man-made violence and universal human follies, irrespective of its country or era or troubled phase. Basing it on two Waryam Singh Sandhu short stories, the director, whose own childhood is dotted with vivid imagery of his simmering Delhi locality, designs his own psychological portrait of tension: The narrative of a hapless Sikh family with a barking dog caught between the whims of Khalistani terrorists by night and the oppression of their paramilitary counterparts by day is bookended by a (derivative) story about two anxious Hindu men, Jugal and Raj, hitching a last-gasp train ride to Amritsar with an elderly Sikh gentleman. 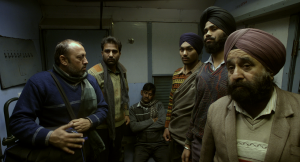 At one point early on, the two young Sikhs already in the compartment generously offer the older man a seat, while the Hindu conductor, who seems to be a surreptitious do-gooder, eyes the two non-turbaned newest entries suspiciously. No doubt ruffled by this same-sided mistrust, Jugal presumably thinks back to the night he was offered shelter with his family at an isolated farmhouse earlier in the month. The inhabitants were Sikhs, who went from weary to welcoming when they recognised him as a distant relative. He probably reminisces about this fleeting act with fondness, which perhaps leads him to ruminate about this sudden recognition — and fruitlessness — of identities in this time of strife. He isn’t aware of what became of the family. For him, they represent what isn’t present in the compartment.
After Jugal’s fortuitous night though, Singh continues the ‘anti-flashback’, and thematically passes the baton forward; the backstory of this household now becomes the film. He drops us into the life of this family, caught between the devil and deep sea. Joginder (Suvinder Vikky), the patriarch, realises that their beloved dog, perhaps the only symbol of innocence left in the ‘civilised’ world, must stop barking all night if they are to live. Voices, in a way, must be snuffed out to allow a noisy clash of ideologies — humankind’s most tragic irony, considering most conflicts are fought to ‘reclaim’ identities. And irrespective of whose side he is on principally, he stands to become the victim.

Long lingering shots, overcast skies, the sound of silence and rain and dust and wind, an unhurried sense of nature and paddy fields (so as to make one mentally juxtapose the calmness of a butterfly against the ‘world-burning’ brutality happening off-screen) and worried faces populate his sparse landscape. This may seem slow and forcibly meditative as it unravels on screen. It’s difficult to fathom that everything is happening in the minds of these faces. And we see such faces for extended periods of time, at various stages of internal conflict. Some of the supporting characters, though, are clearly untrained (non-actors, as well documented in interviews), and despite the authenticity of dialect and looks, there’s an unmistakable consciousness in their delivery. The problem here is consistency; the protagonists seem to be surrounded by robotic numbed zombies, which, in a way, is fairly symbolic. This isn’t really technical nitpicking, because there is a fine line between stiltedness and terseness; it often breaks us out of the otherwise-searing nerves of the more experienced theatre artistes. In this pursuit of method and mood, Singh occasionally risks a loss of viewer empathy, especially given that he soon establishes a stage where we begin to choose emotional sides, and hope and pray and almost plead for the dog to shut up for his own safety. 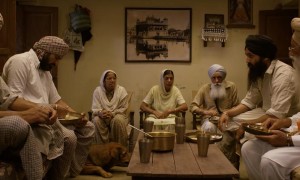 One wants to feel for the children too, who can’t seem to understand how their unrest-sensing pet is the sudden and all-defining bone of contention. More than once, we are made to sense the demise of the dog, only for him to turn up serenely unbothered the next morning. Mentally, we rejoice, only to be sucked back into the throngs of inevitability. At one point, the dog gingerly ambles towards his poisoned bowl of food. Dogs rarely reject their daily meals. Joginder reluctantly urges him to eat, trying to get his attention, while everyone looks on as mute spectators, prepared for the worst; this teasing is heartbreaking, sadistic and powerful in its suggestiveness. It symbolises the decay of selflessness and intimacy in a battle to keep afloat; yet there’s humanity in the roundabout half-baked way they’ve chosen; one wouldn’t be surprised to see an increasingly burdened Joginder gradually turn into someone as unhinged as the post-partition-affected Umber Singh (Irrfan Khan, in Qissa). His behaviour invokes future imagery of a perpetually strained and guilt-ridden equation with his wife and kids, with only his old mother (Gurpreet Kaur Bhangu) as an unconditional rock of bias. And to have a handsome Himalayan sheepdog in the middle of it all — you’re killing us here.

Even though I couldn’t quite understand why the film ended with the ‘secondary’ thread of the men on the train, I do understand its relevance. What Jugal perhaps doesn’t realise is that his story is the one of advancement — a first notch on the belt of gradual healing — and perhaps an indirect result of his safe night in a (terrorised, unbeknownst to him) household. Despite his desperate experience on the train, it was actually filled with people on the mend — a gruff conductor who didn’t resist, Sikhs who trusted, and Hindus like him who quietly helped. And yet, it’s impossible to forget that, perhaps days later, Indira Gandhi’s assassination by her Sikh bodyguards will undo this baby step, and give birth to many more brutal and more merciless Chauthi Koots.

Eventually, Gurvinder Singh’s film leaves one with not visions or characters or indulgent explorations of torment, but an uneasiness associated with suppressed memories of alienation and distrust. It could be from anywhere, any time, during any war or curfew or lockdown or even an uprising; Turkish citizens in Istanbul, recently, had their own taste of this bitter pill in a more contemporary setting. Here, one keeps waiting for things to happen and not happen. But everything has, in fact, already happened. Chauthi Koot is just an unsaturated, and undeniably hypnotic, snapshot of its ripples.