The Eternal Moonlight of Spotted Minds.

I know precisely what Egyptian-American filmmaker Sam Esmail (who is now known as the creator of everyone’s favourite TV series Mr. Robot), whose directorial debut COMET (2014) compels me to ponder and write about it, tries to accomplish. Or, at least, I think I do.

Whether he does or not is of little consequence, because he shows us — through his starry eyes — what the proverbial magic-hour-montage (“my life flashed before my eyes!”) is, if stretched and slowed enough to be understood as a coherent riddle. It is more than a neatly cut rush-of-blood rapid and blinding sequence of unconnected and important events.
It could be several faces of one person, several moments and moods with that person, or several memories of phases and moments and moods with that person.

In a nutshell, it is that one person. 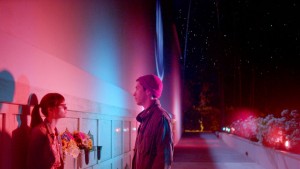 Even if it isn’t true, I wouldn’t like to disagree with Mr. Esmail.

It almost feels like he intentionally fell in love with a beautiful girl, started a long courtship with her, recorded the evolution of each stage rather systematically, stepped out of his body to get a birds-eye view of their love every year, shifted to a different city for another conflict and perspective, analysed their emotions and reactions rather neatly and mechanically, stored them away in surreal New York (culture) v/s LA (space) imagery on a computer, and finally—after breaking up with her and getting dumped by her to know exactly how painful separation and de-addiction can be—pieced it together in the form of a short, sweet and scrambled movie.

Just like his memories of their time together; like the many situations he re-dreamed about just to make them right in his head; the events that he recreated repeatedly to feel what it was like to love her again; like many lucid dreams about her that must have had him on the verge of attaining her forever; like those dream kisses that were often cut short by his dog licking his face; like déjà vu moments where he was convinced that they were back together after breaking up twice…Esmail constructs and deconstructs a relationship in a most complex and evocative manner on screen.
He proves that a screenplay, however ambitious and vivid, comes second only to the power of imagery.

Narrative linearity is for mainstream rom-coms. Seeping golden light, brooding tones, self-aware smartalecky characters, rainy sound palettes and moody moonlight are invariably inhabitants of an indie landscape. Not quite arthouse either, but Like Crazy is one of the many impressive palettes COMET invokes. 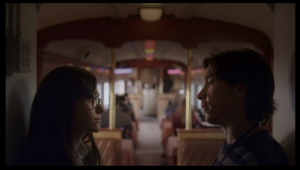 Therefore, Esmail even manages to put in some meta mumbo-jumbo about parallel universes by making his protagonist—Justin Long’s Dell—a neurotic, antisocial, needy, narcissistic but vulnerable pothead struggling to pitch love against destiny in his cluttered mind. Nonsensical memories and rambles, many of which this beautifully-shot film has in abundance, can be put down to the weed he keeps smoking. It doesn’t have to make sense, as long as it helps you understand why and what Dell exists to accomplish here.

Dell has no mind filter, though he does—in a certain Mr. Holmes’ words—have quite a mind palace.
Whether he’s dreaming about or actually living through his on-off explosive relationship with Emily Rossum’s staccato Kimberly is open to indie-sci-fi ambiguity. We jump from one stage of their relationship to another, often without so much as an emotional connect or much context; this can be quite a disconcerting feeling.
This snap in comfort and continuity is precisely what one experiences when, like Dell, one says something wrong like “I like you because you like me” only moments after reciting a passage of emotional poetry to her. These are fatal words to a girl, and perplexing words to a boy.
Just like that, it can end. And it is even more painful because, in Kimberly’s words, “you almost had me.” The doomed what-if feeling haunting the boy’s mind thereafter often lays the foundation of his future insecure, paranoid and possessive personality. 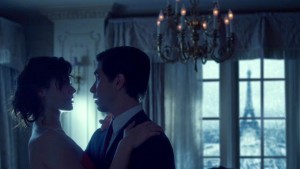 One moment you’re watching love blossom against a comet shower through a blast of unusual quick-witted dialogue, and the next, you’re witnessing this love being gradually snuffed out in a gloomy Parisian flat. They’ve changed as people by then, and have assumed different roles in what seems like an unhealthy, habitual relationship. Reality hits harder because of the heady, come-on-underdog moment we witness only a minute ago.

Like a marriage on the verge of failure and self-sabotage, their characters find reasons to overcomplicate delightful chemistry.
And perhaps this is Mr. Esmail’s intention. Relationships are anything but simple; they grow and evolve and take work, much of which is sometimes lost on young, restless couples aching to be somewhere and do something…together or alone.

The jump cuts and leaps into various time frames of what we believe is an offbeat courtship between two over-intelligent characters, is actually just another love story. We all believe ourselves to be unconventional in love, when in reality we’re only reinforcing every known cliché in the book—just like Dell does, time and again, with his word-heavy and forcibly pessimistic and measured stance on their union.

That it must die in Paris out of all places is, of course, keeping in line with the anti-thematic, eccentric and contrarian notions of romance Dell and this film claim to fortify.  But he has many monologues, where he tries to put across desperately with varying levels of success, the futility of trying to be with someone beyond your reach.
He struggles to explain, even though he displays his frustration accurately, why he keeps going back to her, and why they never reach the same level of love for one another. At any stage, either he loves her more, or she loves him to pieces. There is no balance, and we get just a glimpse of a moment where they seem to be experiencing the exact same feelings. This moment is fleeting, much like a dream that snaps when too good to be true.

He struggles through all their familiar trials and tribulations—many of which are never shown, but spoken about in screams and tragic sobs on phones and in trains—to find perfection in their love. To find stability in their dynamic equation.

And most of all, he struggles to communicate, much like the ambitious and ‘method’ story he is part of. 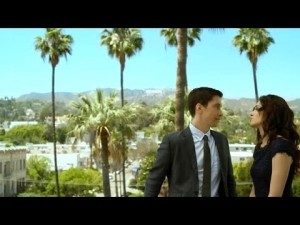 “Which universe are we in, again?“

And perhaps in a parallel universe, or in a free-flowing stream-of-consciousness dream or whatever you want to call it, COMET makes sense to more people than just me, and they’ve accepted it and loved it, and they’re all pondering louder and deeper than I am.