U Turn Review: audacious, engaging ride to a tepid finale

I’d love to enter the mind of Pawan Kumar. He has the face of an analytical, sincere engineer — one who is keen for us to understand his wavelengths and reasoning complexities. The young Kannada writer-director would perhaps even make a film out of that. Or maybe he already has, given that his wildly inventive ‘Lucia’ explored the dream-space genre, hot on the heels of Christopher Nolan’s ‘Inception.’ Lucia was vividly original, and not in a defiant avant-garde sort of way; it always felt like an overexcited, throbbing brainchild of an ambitious storyteller who doesn’t want to know his limitations. 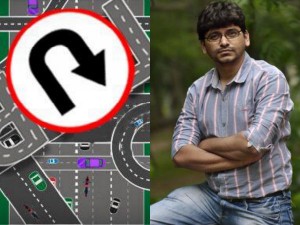 Which is why – and I don’t want to sound too cynical here – it was always destined to be crowd-funded. That Kumar pulled it off with presumably a product closest to his original vision is remarkable, but it does say much about the conservativeness that plagues traditional industry coffers. Perhaps it’s not surprising that the next left-field concept to be crowd-funded is Kumar’s own, again; the box-office failure of “studio risks” like the Hindi-language Roy (identical, but bastardized, in spirit) can’t have helped matters. While his next script after Lucia, C10H14N2 (Nicotine), found lesser backers than his first (“Suddenly I became popular, and not the underdog that needs to be funded,” Kumar noted wistfully in an interview), one would imagine that U-Turn is more than just his gap-year film. Most good filmmakers tend to have this graph — of making smaller, ‘functional’ films in between their big passion projects just to keep their juices flowing, just to not sit idle and have the world recognise that even their “timepass” work is one of great enthusiasm and skill.

There are times in this Kannada-language film (dubbed in Hindi) when you think you’re watching perverse Final-Destination style ‘destiny porn’, times when it feels like a lurid slasher flick, an absurd police procedural, a conventional murder mystery, a revenge drama, and even a paranormal horror movie. The last of them is perhaps a disappointing trait, given that Kumar takes us to a point where he could have gone with any route; where we’re so desperate to know how he has been one step ahead of us — in a very real-worldly manner. Perhaps it’s my general allergy to anything ‘supernatural’ that Indian cinema doles out, or perhaps one expects more from a man who has just made a socially relevant “thriller” out of mundane everyday incidents.
And to think, it begins with a simple, almost playful plot: While researching a story about rule-breaking motorists on a Bangalore flyover – those who manually remove loose divider bricks to take illegal U-turns (don’t smirk, we’re Indian) – New Indian Express reporter Rachana (Shraddha Srinath, artsy nose ring et al, a rightly lapsed lawyer-turned-actor) gets embroiled in a sinister chain of events. An eccentric old pavement-dweller relays information about these offenders back to her; what they don’t realize then is this: every one of them mysteriously dies the night after their little transgression. Once the cops pick her up because of her researched “list”, the film takes off, and relentlessly prods and smirks at several genre tropes. At first, it looks like she is just an enthusiastic young reporter stuck in the wrong place at the wrong time. She serves as the eyes and ears of the audience, letting her conscience be shaped by the bizarre possibilities ahead. 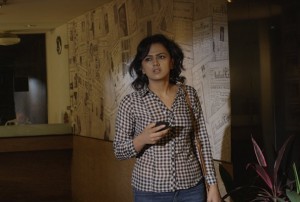 At one point, Rachana parks her scooter in the slow lane, intent on dislodging the stones herself to reach the bottom of this. She strides across traffic towards the divider. As a viewer you’re praying (first, that nobody runs her down) that she doesn’t do the unthinkable. This makes for a dramatic, tense, frightening inevitability – the kind you don’t need to artificially create with creaky doors and fake noises. When Kumar cuts to a wider shot, you feel sort of silly – it’s only a girl doing ‘jugaad’ in broad daylight. We’ve seen this countless times every day. Then, how, oh how, is this making our hearts race? And that’s when you realize how Kumar is more than simply a man with a radical idea; he has woven an intricate, semi-believable whodunit around a seemingly mundane city habit. “Woven” is important, because the proof of how expertly he builds this up lies in the sheer letdown-ish “oh, no, you didn’t” vibes one feels during the finale.

I also say intricate because Rachana’s profession isn’t mere decoration to push the plot forward; she has a budding, cute (authentic) office romance with the paper’s crime reporter (Dilip Raj; perceptive and hunk-ish), who also has an obvious part to play here, considering there seems to be a credible possibility of a law-breaking psychopath going on a warped morality rampage (eerily reminiscent, in peripheral aura, of Colin Farrell starrer ‘Phone Booth’). She’s the quintessential single-girl-working-her-passion prototype — a modest two-wheeler to office and back, a shared ‘Singles’ flat (with a roommate we never see) and that perpetual faint tinge of paranoia and distrustfulness on her face. There’s also the added guilt of not really traversing her parents’ path of a “stable” desk job and an arranged marriage. The first scene of the film has long-winding playful banter in a rickshaw that turns into a nervy debate of clashing ideologies and failed dreams. It ends with her dropping off her bickering mother to the bus station after what has presumably been a week full of “Why don’t you settle down?” emotional-blackmail conversations.

There’s also the upright cop (Roger Narayan; very likeable), always on the girl’s side, going beyond the call of duty, a la Rana (Parambrata Chatterjee) to Vidya Balan’s curious ‘Kahaani’ character. As a little bonus, we get quite a glimpse into the groovy mechanism of a Traffic Control Room, as well as more than a shallow peak into the (far too orderly) workings of a police station. Kumar constructs fairly predictable sequences and even shows some cheeky visual flair, especially in a late-night stagey lock-up scene with possessed prisoners, frightening security cameras, opportunistic smoke and conveniently fumbling cops.

His narrative style is straightforward as compared to the complex Lucia, though it gets a little confusing to distinguish between time frames once the final revelatory period begins. It’d also have helped to have sync-sound throughout, instead of the distracting hollowness of dubbed voices; this instantly yanks you out of their world during the verbose opening setup, when Rachana is still easing into her career-girl environment. The eerie, discomforting twist at the end again reinforces Kumar’s deceptively mainstream packaging of experimental ideas. It may seem like a bit of a sellout, but you will remember the film for precisely how shortchanged you feel because of the journey up till then.
This is a rare talent – the power to convince your viewers that they’re seeing something drastically different, when they’re actually just experiencing a solid, engaging ride.

U Turn seems audacious because it not only explores the cruel quirks of fate – of how seemingly harmless actions lead to a domino effect of life-altering consequences – but also because it dares to teach you lessons in a language you will understand. Moments of empathy and calm are constantly followed by the sinking sensation of doom just around the corner.

When CCTV footage of real-life offenders plays during the end-credits, you can’t help but expect the worst. Surely, Kumar can’t have inserted a gory accident in there. Thankfully, much like his discerning little potboiler, he’s only messing with us.
Or, is he?