Cinematic revolutions, unlike their political counterparts, can be rare occurrences. Dominant commercial cinema regimes, such as Hollywood and Bollywood, have become ossified as indomitable institutions that can dictate the direction of national culture. Bollywood has been globally regarded as cinematic shorthand for India. This looks set to change. The inexorable rise of new Indian Indie cinema has kindled a quiet revolution.

A palette of fresh filmmaking talent is painting a completely different cinematic canvas to Bollywood, employing incisive, experimental, alternative and socio-politically attuned content. Whilst this new wave of independent Indian films has not yet dethroned Bollywood – the long-standing potentate of Indian cinema, their growing popularity in India and across the world bears testament to how unobtrusively the new Indies have arrived on the Indian Cinema stage – largely understated, and for the most part, unannounced.

Newly released, India’s New Independent Cinema: Rise of the Hybrid is the world’s first book on the phenomenon of the rising Indies. Published in Routledge’s cutting-edge Advances in Film Studies Series, this title offers a kaleidoscopic, ringside view of India’s new cinematic agents of change. The book is based on meticulous fieldwork research in Mumbai, Delhi and Bangalore, and features the voices of acclaimed independent actors and filmmakers including Rahul Bose, Kiran Rao, Anusha Rizvi, Onir, Aamir Bashir, Bejoy Nambiar, Kamal Swaroop and Q, amongst others.

Arguing that the Indies should be granted status as a bona fide cinema form distinct from Bollywood, I trace the historiographical evolution of these new films. In this regard, I position the Indies as ‘hybrid mutants’, formed from a synthesis of the genetic DNA of multiple cinematic parents – the grand traditions of the various Cinemas of India: postcolonial arthouse, Middle and Parallel Cinema, 1990s Hinglish films, and also Bollywood.

The book also demonstrates how the new Indies are glocal – exhibiting a universal World Cinema global aesthetic in terms of form and style, but firmly rooted in local content. In other words, it is possible to spot in the Indies, a fissiparous pan-global assortment of filmmaking styles, codes, tropes and grammar. These range in influence from Jean-Luc Godard, Satyajit Ray, Takashi Miike, Wong-Kar-wai, Gaspar Noé, and Mohsen Makhmalbaf to Alfred Hitchcock. However, the beating heart of these films pumps with themes and issues which are unequivocally Indian. The book explores these diverse and topical contemporary Indian discourses as espoused by several Indies. These include farmer suicides, the neoliberal capitalist machine and government apathy in Peepli Live, marginal individuals set adrift in the modern Mumbai mainstream in Dhobi Ghat, anarchistic teenage urban angst played out in transgressive postmodern rap musical Gandu, and India’s tempestuous see-sawing between realms of the spiritual and material in Ship of Theseus.

Expanding on glocal aspects of the Indies, the book reveals the mechanisms by which Bollywood has exerted its often draconian dominance over the other forms of Indian cinema. It explains a self-devised concept called a global cinema ‘meta-hegemony’, where Hollywood dominates global cinema and Bollywood, although an up-and-coming competitor is still largely seen as secondary to Hollywood. However, Bollywood exerts its own internal hegemony over the other cinemas of India including the new Indies. In this Bollywood-centric Indian milieu, it is interesting to observe how the Indies are trying to carve out their own space, using inventive and heterodox modes of funding, distribution and exhibition, in the lack of an autonomous Indie distribution structure.

A chapter in the book is devoted to the dynamics of Indie funding and dissemination. These include multiplexes, crowdfunding, international co-productions and the migration of young Indian audiences, particularly low-income groups and students to the cyberspace of BitTorrent peer-to-peer file-sharing downloads. This young demographic turns to the cybersphere to access Indies and World Cinema, largely because conventional access is placed out of reach due to a disproportionate multiplex pricing system, which charges the same ticket price for a Bollywood blockbuster and a low-budget independent film.

Owing to their polemical and often controversial content, issues of censorship, rather unsurprisingly, assail the Indies, and forms an important area of analysis in the book. I look at the role of the infamous ‘Censor Board’, also known as the Central Board of Film Certification (CBFC), in exerting a chokehold on free filmic expression in India. In this regard, I mention multifarious scenarios where films such as Gandu, Kaum De Heere, Papilio Buddha and Unfreedom, to name a few, have fallen under the censors’ blade. The chapter on censorship analyses the often quixotic and chaotic operations of the CBFC, exposing the antediluvian parameters by which the organisation operates. I broach the theme of politically influenced appointments of CBFC personnel, such as current chairman Pahlaj Nihalani, examining broader contexts and implications including the recent students’ strike at the Film and Television Institute of India (FTII) following the installation of Gajendra Chauhan as chairman.

The second section of the book dives into in-depth analyses of several seminal Indies, ranging from the aforementioned Peepli Live and Gandu to The Lunchbox, Haider, I Am, Harud and Ship of Theseus. These close readings of Indian Indie films are informed by a broad international, intercultural and intertextual template, drawing parallels with films such as Peter Weir’s The Truman Show, Canadian production Jesus of Montreal, Joshua Oppenheimer’s tour de force documentary The Act of Killing, and Djibril Diop Mambéty’s postcolonial cinema masterpiece Hyenas. This transnational ethos applied to the book’s case studies of Indian Indies is designed as a mimesis of the Indies own glocal sensibilities.

In the final chapter, the book charts the future course of the Ship of Indian Cinemas. It boldly augurs the Indies as the future of Indian Cinema, exploring the possible mechanisms and modalities through which the new Indies could establish an autonomous funding, distribution and exhibition structure. Overall, the book aims to serve as a foundational bellwether for future investigations on what will be a fertile field of research. With new Indian Independent cinema poised to grow and flourish in leaps and bounds in the coming years, it seems a fait accompli that local and global interest will be drawn to these modern architects of a contemporary Indian cinema renaissance. In time, Indian Indie cinema and its creators will get the undivided attention they have earned and so richly deserve. 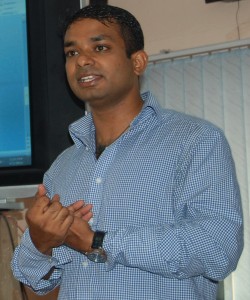 Ashvin I. Devasundaram is a Lecturer in World Cinema at Queen Mary University of London and author of India’s New Independent Cinema: Rise of the Hybrid. He is Programming Adviser for the London Asian Film Festival (LAFF), Creative Director of the Edinburgh Asian Film Festival (EAFF), and a BBC Academy Expert Voice in Cultural Studies and Visual Arts. He delivered the 12th Annual Dadasaheb Phalke Memorial Lecture 2015 at the Indian High Commission’s Nehru Centre in London, in a lecture series that has previously featured Shyam Benegal, Saeed Akhtar Mirza, P K Nair and Shivendra Singh Dungarpur.

There is a book launch at the Indian High Commission’s Nehru Centre on August 9, 2016. Click here for details.