A dawn of recurring darkness

Lad Rymbai village, East Jaintia Hills, Meghalaya. An isolated cluster of huts dots a seemingly middle-of-nowhere stretch of rocky wilderness. Only the familiar sounds of sing-song truck horns traversing National Highway 44 serve as a mist-breaking reminder of this not being the last — or first ever — village of known civilisation.
Suraj, an 11-year-old boy, is one of the several dozen Nepali immigrants inhabiting these shacks. He is also one of the many ‘children of coal’; born to a widower, who, like every male adult there, spends his days sliding through dangerous rat-hole crevices mining for black gold, and evenings drowned in alcohol to forget the numbing darkness of those days. In between shy giggles, presumably in an early phase where he’s still getting used to being filmed, Suraj sounds remarkably mature and observant for his age. But this isn’t a trait that should impress us; there’s a reason children who sound like grown-ups tend to make us uneasy. They have no business succumbing to adulthood so early. You don’t want to hear them drift away into thoughts of responsibilities and futures.
He talks about his father’s rampant alcoholism, money crunch (“he drinks more than he earns”), and the claustrophobic circularity of life here. Wake up, gather tools, go to work, come back, rinse, repeat: adulthood, irrespective of economic or regional being, is often treated as a necessary debt one pays for daring to grow up; providing for your parents is part of the non-negotiable package. He has a damaged eye, but this is a condition best left unexplored, given the toxic environment he occupies.

As he grows accustomed to director Chandrasekhar Reddy and his ubiquitous camera, his spunky voice acquires a sad undertone of inevitability. He doesn’t quite fancy the concept of classes and education — he has dropped out of school to help his estranged old man — but if it means not feeling like a Rs.500/day rodent, Suraj wants to learn. But “who else will take care of him?” is a reality he is reluctant to escape. Taking the plunge won’t be easy. He needs to get it out of his system. And even if he does, one suspects he may not relate to mates whose bright faces aren’t blackened with dirt.

Fireflies in the Abyss, a documentary that thrives on revealing a lifestyle vastly different and yet all too familiar, paints more of a human picture than a socioeconomic one. Reddy’s cameras don’t quite focus on Suraj alone; it blows in the direction of the wind, tagging along, lingering and capturing the various moods and moments of a community lost in transition. They just happen to risk life and limb, day in and day out, to earn a living. Most of them are giggly and poetic about their own tragedies, perhaps because they know that they’re being heard and seen.
On one level, this is a cautionary immigrant tale, about a bunch of reluctant personalities caught between the illusion of roots and livelihood. Going back to their native homes is often considered to be a sign of ‘weakness’, a final resort, much of what is being considered silently and discreetly as they go about idyllic chores. Everybody wants to leave, and nobody wants to leave. Some of them, like Suraj’s cranky brother-in-law, who runs a tiny dhaba with his young wife (perpetually seen slaving over the stove, never making eye contact with the cameras), is fed up and already halfway back to Nepal in his mind. Suddenly, the impoverished place they abandoned so many years ago seems far more romantic in retrospect; he talks it up in a fond home-is-where-the-heart-is way, as if he were aching to go back all this while. When they do, though, there’s no sense of finality to it; much like Suraj’s temporary escape to another village. They may be back soon, and you feel both happy and sad at this possibility. 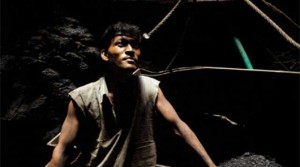 But on many other levels, this sombre film is simply about existing. Reddy’s close proximity with his subjects allows us to get immersed in the pace of this village, as if we were watching a fictional story of a land far, far away. You begin to ache for a narrative, and for the characters to behave, speak and take decisions a certain way; one day, it has shades of Raam Reddy’s ‘Thithi‘, and on another, it feels like a melancholic cross between Avinash Arun’s ‘Killa‘ and Aditya Vikram Sengupta’s ‘Asha Jaoar Majhe‘. Cooper Moore’s trumpet-laden jazzy score further blurs the suspension-of-disbelief lines, until the rather everyman voiceover trope jolts you back into documentary mode.

Soon, it stops feeling like you’re simply visiting the space for an agenda, of either watching a video or taking a quick earthy vacation. Instead, this invokes the kind of dread and curiosity most city-slickers feel when they momentarily stop on their exotic treks/tours to wonder if they can really live — and die — at these places. Imagine staying back beyond your usual 7-day ‘getaway’, with no knowledge or choice of a life beyond. I’ve spent hours like that on a deserted beach or at the peak of a hill, staring at locals with equal doses of awe and sympathy. The simplicity, the deafening routine-ness, is both desirable and frightening.

Occasionally, the view loses its sheen then — much it might have for an ageing haggard named Subba, who perches himself atop a hill for a breather (“I like looking down at my people from far away”) from time to time. He waxes musical about the pain and rage he still feels after his wife eloped with one of his workers. I may just kill both of them if I saw them again: he declares, with a downcast grin that illustrates a gentle temperament in conflict. He has served as an army driver and a club musician back in the towns, and yet, here he is, unable to look beyond the gloom of digging for a future. He probably realises, while singing his songs, that the future is here, and has happened, and has almost passed him by.
Ditto for the others, who seem to be finding creative ways to piss away their daily earnings: their hobbies involve gambling and archery betting, and they spend drunken off-days in blissful denial, wondering why fools slog in the Middle-East when “the money is so rewarding here.”

Then there’s the act of mining itself. This profession can be viewed as metaphorical and all that, but it’s so hardwired into their systems that even Suraj falls prey to its inescapable aura. With his best friend, Shaila, who is soon to go ‘back to school’, Suraj explores abandoned mine holes with the wide-eyed wonder of discovering old shipwrecks. “I’ve heard of people die when they encounter the dreaded ‘dedh-foot monster’,” he exclaims, in a tone that seems unlike his. Perhaps it’s a practiced juvenility employed only so that he can relate to the similarly-aged Shaila.
In another uncomfortably lengthy scene, a Go-Pro camera fastened onto a holding cart is pulled into the perilous low-lying tunnels by a young worker. He is one of the few guys who wears t-shirts, and has no problem dirtying them if it means that he doesn’t *look* like your ave 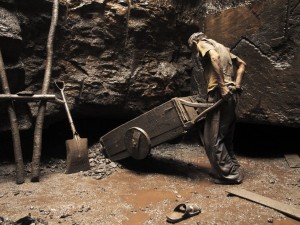 rage jaded digger. For the longest time, we see his helmet-wearing face as he slithers deeper and deeper into the earth. Heavy breaths, urgent eyes, long laborious semi-strides, and the sound of wheels blunting the hard stone. You begin to feel the air thicken. If this were a blockbuster movie, this scene would be the tense music-less build-up to a gory disaster; you expect him to be caved in any second. He eats his lunch quickly before a giant hungry rat gets to it. The physical act of scraping at the walls around him, desperately knocking tiny chunks of coal to the ground, is almost therapeutic for him. And then he pulls the cart back out the same way — an interminably long route — till you see light at the end of the tunnel. He snakes rapidly towards the light, and simply shoots out into the mini-canyon like a soiled baby popping out from its mother.
Only, he’s too tired to be crying. It’s raining; you’re relieved, and finally start breathing again. But he doesn’t care for the cool water hitting his skin. You don’t know if this is the world he wants to come out to. Or if he wants to come out at all. The short nights in between feel like a break from his real life.

In the many shots across many seasons of different generations stepping down into the abyss, an omnipresent old man, who stands mid-way on the fragile stairway, watches them struggle up with the weight. A peripheral figure, he’s just…there. One imagines him to be some sort of a caretaker. “A bookmaster. I keep count,” he answers, in a nicely bookended interview by Reddy towards the end, “But I don’t remember my name.” Perhaps he doesn’t remember why he is supposed to sound depressed. As he goes on to mention that he doesn’t have any family left either, and how 35 years have just passed by like that, it dawns upon us: They never do come out of that hole.
None of us really do. 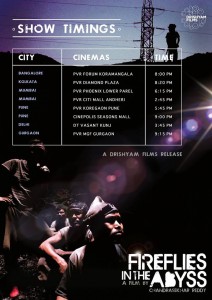