Meenakshi Shedde has been one of the most respected and extensive voices on Indian Cinema for three decades.
She is now the South Asia Consultant to the Berlin and Dubai film festivals, and curator to festivals worldwide. She has won the National Award for Best Film Critic, been on the jury of 20 film festivals including Cannes, Berlin and Venice, and been a mentor on film critics’ labs of the Berlin, Melbourne and Mumbai film festivals. She currently writes for media worldwide, including Variety, Screen International, Cahiers du Cinema, Midday and Forbes Life India.

On Saturday, June 25, 2016, as part of the AVID LEARNING initiative (a public programming platform and cultural arm of the Essar Group), she will be conducting a 101 Film Appreciation Workshop called ‘Discovering New World Cinema In India,’ about a new era of fearless and original Indian regional filmmakers beyond Bollywood.

Here, we chat with her about her long-time role as a senior critic and curator, the changing landscape of Indian regional films and writing/critiquing on cinema, and what one can expect this Saturday at the Avid workshop. 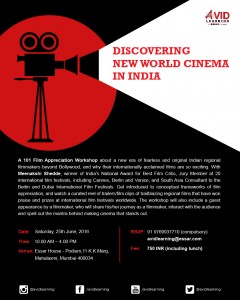 I remember you mentioning that you end up watching up to 800 films a year for festivals, jury duty and consulting, all (or most) of them regional Asian. At what point in recent history did you notice the tide changing, as far as quality and international recognition are concerned?

I’ve resolutely avoided counting how many films I watch every year; I fear I’ll self-destruct if I find out the answer. It averages between 300-600 films a year, and it includes features, documentaries, short, experimental and animation films from South Asia, so that’s India, Bangladesh, Sri Lanka, Pakistan and Nepal. This is for recommendation or pre-selection as South Asia Consultant to the Berlin and Dubai international film festivals. I see many more international films when I’m a jury member, and additionally watch Asian films—which are my specialization–as I am also on the Asia Pacific Screen Awards (APSA, Brisbane) Nominations Council, in Australia. The run-up to Berlin is so intense, I like to keep my brain empty for a stretch, film-wise, after the festival, so that I am fresh and keenly open to absorbing films again.

Indian cinema has been showcased at film festivals worldwide for nearly a century, and at the Venice film festival soon after it started in 1932. I’ve been working with the Berlin film festival for 18 years now, and film selection depends on several factors, mainly merit but also luck. While average 3-5 Indian films got selected every year on average, it jumpstarted to nine Indian films selected in 2010 and ten films in 2014.  I’d say 2014 was a turning point, as such a wide range of films got selected, from Imtiaz Ali’s Bollywood indie film Highway, to Avinash Arun’s Killa (Fort, Marathi) which won the Crystal Bear for best children’s film given by the children’s jury; Pushpendra Singh’s arthouse jewel Lajwanti, to Prabhat Pheri, a superb documentary on FTII’s rich history, and short films including Kush Badhwar’s Blood Earth—he is a director who primarily approaches film from the perspective of sound and music. And Satyajit Ray’s Nayak in the Classics section. Since then there have been some superb films including Masaan, Titli, Dum Laga ke Haisha, Court, Thithi, Sairat, Ottaal, Asha Jaoar Majhe, Island City and many more, which have been internationally acclaimed, so the quality seems to be gathering momentum in different languages.

Do you believe that the finest regional cinema doesn’t get noticed in our own country UNTIL it manages to win festival accolades or national-award recognition? Films like Killa, Asha Jaoar Majhe, Court, Thithi, Island City, Visaaranai are recent examples…

True, it is very challenging for independent, arthouse cinema to find an audience in India on their own, because our audience has not yet matured to be a consistent market for quality films. So festival selection, awards and acclaim are often crucial to kickstarting a film’s market potential. Importantly, festival selection is important not only to find a domestic market, but a worldwide market for your films, especially beyond the traditional diaspora markets, as you can generally negotiate more territories or better prices for a film stamped with festival approval. This festival strategy is effectively used worldwide; in fact, Hollywood looks at festivals like Cannes, Berlin and Venice to launch their films, then works backwards to finalise a film’s schedule. Mainly, if a film is selected at a festival, it gets a tremendous boost, as the festival promotes the film, and draws the attention of a large number of international film critics and buyers to the film, that you could otherwise never afford on your own.

When one hears the term ‘regional cinema’, it’s in a very underdog sense — as in, the cinema that often gets ignored in favour of Hindi cinema. Do you think the recent surge of ‘parallel’ Hindi cinema (Masaan, Titli, Dhanak) getting recognised abroad and at home has helped change this perspective? They more or less fall in the same bracket as regionals for people who thrive on Bollywood movies.

Certainly, Bollywood’s indie films like Masaan, Titli and Dhanak have broadened the audiences’ taste for different stories and narratives. But it’s a fluid situation, and even hardcore Bollywood has produced superb mainstream films with an indie spirit like NH10 (produced by Eros, Phantom and Anushka Sharma’s Clean Slate) and Dum Laga ke Haisha (produced by Yash Raj Films). Hollywood sent shockwaves in Bollywood in 2011, when Fox Star Studios signed a three-Tamil film deal with AR Murugadoss. Today Disney, Eros, Viacom 18 and others are all producing, acquiring or distributing regional films in Marathi, Bengali, Tamil and Malayalam.

Are there such films that you have personally discovered as part of a ‘premiere’ jury recently, that have gone on to make waves?

My discoveries have worked only with tremendous support from my senior colleague Dorothee Wenner, South Asia Programmer of the Berlin and Dubai film festivals, and the festival selection teams. Sairat was a thrilling discovery, which I recommended to the Berlin film festival, which selected the film, and it has gone on to such resounding success. Also, Jayaraj’s Ottaal (The Trap) is an exquisite jewel of a film I saw on the NETPAC Jury of the International Film Festival of Kerala. An adaptation of Anton Chekhov’s Vanka in Malayalam, it swept all the top prizes there—Best Film, FIPRESCI International Federation of Film Critics Jury Award, the NETPAC Award Jury (Network for the Promotion of Asian Cinema) and audience award. I recommended it to the Berlin film festival, where it was selected and went on to win the Crystal Bear this year.

Do you think language/regions/segregation are a barrier for young “genre-bending” voices like Pawan Kumar (Lucia, U-turn) and Karthik Subbaraj (Jigarthanda, Pizza, Iraivi) who experiment with universal modern sensibilities in a country yet to embrace innovation?

Regional, non-Hindi filmmakers struggle to make their voices heard beyond their own regions. Many talented directors, including Umesh Kulkarni (Marathi), Vetri Maaran, Karthik Subbaraj (Tamil), Pawan Kumar (Kannada), Rajeev Ravi (Malayalam) and Kaushik Ganguly (Bengali), are avid watchers of world cinema, and their sensibilities have a lot in common with that of the indie crowd in Bombay and all the other metros.

Our tragedy is that we are not aware of our dire poverty, in terms of film exposure, given the cinematic riches of this country. India makes films in 42 languages, of which Hindi is just one. There are 41 languages that we may not have seen films in!

How familiar are you with the voices of the current Indian film-critic landscape? How has this changed compared to, say, when you started as a journalist?

I know and follow a number of contemporary film critics in Bombay and other cities, in print and online media. But at press previews, I’m all at sea and desperately look out for familiar faces, as the hall seems swamped with youngsters writing in online media, bloggers and more, whom I don’t recognise. Sometimes, PR reps have no clue about my work and I have to keep persuading them to include my name in the press preview list. It is cold comfort that many reputed critics I know share both these concerns.
I love to chat with younger critics after a film and see the film through their eyes. There’s so much to learn. For instance, I asked Suprateek Chatterjee — who is both a practising musician and film critic, a fascinating combination — what kind of music was used in Udta Punjab, and he said it included RDM, among others. Now I haven’t a clue what that is. I regularly read a host of critics, and there is some superb writing by a number of relatively younger critics, including Baradwaj Rangan, Rajeev Masand, Shubhra Gupta, some very fine work by Tanul Thakur, as well as Rahul Desai, Uday Bhatia, and critics reviewing films in regional languages. I like Sahil Rizwan (the Vigil Idiot) and find ‘Shudh Desi Endings’ animation reviews quite brilliant, very funny and sharp. I have been mentored by the writings of critics like Maithili Rao and Iqbal Masud; Mr. Masud (Mr Jilani) has sadly passed away, and Maithili Rao writes superbly, with a real depth of understanding of not just cinema, but also literature and socio-political issues—I wish she had greater visibility.

Do you think film appreciation courses/workshops should be made mandatory for every new generation of Indian film critics? Is there a need to branch out a little more (than just Hindi/Hollywood films) to increase scope of regional awareness here? How far can this role help?

I think good films in various Indian languages should be shown to everybody from school onwards, followed by guided discussions, because films explore both life and art. So, it’s not just for film critics. “School Cinema” already shows short films at schools all over India, with guidance books for discussions, etc. Ideally, everyone should have guided exposure to art, theatre, film, music and sport from school onwards. It’s what makes us civilized.

Could you give us a general idea of what to expect at Saturday’s workshop? Any plans to make it more of a part-time recurring course, given your immense experience and knowledge of Indian cinema?

At the Discovering New World Cinema in India, I will discuss what makes Indian cinema unique, the basics of film appreciation, screen and analyse a short film, discuss important new regional films and filmmakers who have been internationally acclaimed, with trailers in different languages, including Nagraj Manjule’s Sairat (Marathi), Karthik Subbaraj’s Jigarthanda (Tamil), Rajeev Ravi’s Annayum Rasoolum (Malayalam) and Kaushik Ganguly’s Shobdo (Bengali). I also plan to invite a director for a Q/A for a discussion that I will moderate, which will be open to the participants. (more details on film appreciation workshop are attached).
I’ve been teaching film and journalism over 20 years at various institutes, including the Xavier Institute of Communications, Whistling Woods International, and giving guest lectures at Tata Institute of Social Sciences, etc. I’ve been a mentor to film critics’ labs at the Berlin, Melbourne and Mumbai film festivals. I’m keen to start a film club with good curating of films in different languages, but the high point is a Q/A or addabaji after, with high quality discussions, possibly over snacks and drinks. Ideally, we should have a pool of good film curators and critics to sustain this all year. There will be rich dividends in developing a mature film audience, as I have seen at foreign film festivals, and by making good films viable, this directly strengthens the film industry.