The Unbearable Lightness of Cutting Edges

When a 15-year-old enters a mall, she/he goes through a metal detector test, then gets checked physically and only then is let in — a casual everyday affair. In my teens, I had to go through that for the first time when Mani Ratnam’s BOMBAY released in my neighbourhood cinema hall, Aurora Talkies. As much as I was excited to watch the film, the security and the scrutiny was unnerving, maybe exciting but not casual submission for sure.

Why exactly? Google that up.

Multiple city bombings and gun-fires later, submission has become second nature; a generation has been raised into all this and for them it will never be a thing of discomfort or protest. So what if we are being frisked and checked? This is what it is. This is how the world is and this is how we queue up.

Movie making, maybe in the next fifteen years, will be all about casual submission and self-censorship, and no one will find it wrong.
A generation will be raised to read Red as Orange and Green as Blue, and maybe it will all be fine.  The apocalypse is probably not the machines taking over the humans, it might just be an existence without a spine, just heads bobbing to an enthusiastic YES to every command by the order.

WHY will this happen?

Here is “THE WHY” — in a painstakingly all-over-the-place Indie-filmmaker-like non-linear-narrative-with-an-abrupt-ending which will leave you scoopwhoop-level “you won’t believe what happened next”:

Film making has long shifted from the passionate producers to the “naukripesha” white collars. Every idea a display on a conference-room white-board, every instinct crushed being an excel sheet, as every filmmaker carries his own sandcastle and dustbin to most of these meetings.

“A genius who would have taken the AIB Roast to the Laundry and stripped the entire nation bare if he was born in this age.”

“Like a trouble maker? No, we need a Biopic of a desh bhakt…”

“This guy’s story needs to be told, there were none like him and we need to celebrate this mad man who took anyone and anything on, someone who took on…”

“XYZ really likes the idea…he said he will do it.”

Conversations like these are very much like that $80 bill that Seth gives to the man at the store and gets away with a fake ID and also gets all the alcohol that he wanted in SUPERBAD. Great scene, love that scene; I somehow always feel my script is that $80 bill and my street creds are like that fake ID. Every time I walk in, I feel like I am going to come out with a massive slow-motion grin.

Okay, honest confession, breaking the 16th wall Deadpool-style: that was a very biased filmmaker in me speaking.
Besides all of this, the point being, if one has to narrate a very passionate personal story which is not an emotionally manipulative one and also not about pseudo empowerment statements nor is it about raising nationalistic feelings — basically films without that “message” — chances are even you, like me, would have spent the past 4 years *beep…beep…beep…*

Where it all starts.

Some will know very well what that last paragraph was about. Those who don’t, try it, it’s the magic of mathematics that will enlighten you and not endless viewing of the Kurosawa episode of Every Frame a Painting. Either way, you are back to writing the next script and this time hoping you will do it right and totally legit.
Back to the studios. I’ll skip the chapter of crowd funding and International Co-Production.
Ask those who have done it once, do they want to do it again? FUCK NO  Of course not.

So after all the lessons that you have learnt, you will write a more accessible and emotionally charged up script with a more ‘moral’ ending. That is Phase One of the Clockwork Orange Cleansing. You are already on your path to becoming a moral filmmaker. You spend time, watch uplifting films and write that script, but the mad-man in you will leave invisible marks on the script. On that…a little late.

Somehow by the freak of nature when a comet makes love to an asteroid that was about to be sucked into a black hole, you find a star who just did a very successful but a very hollow commercial project, hence wants a quick temporary makeover, or maybe he genuinely wants to juggle the edgy with the fluffy, job hi…you have some street cred and you happen to meet him, or some trusted friend of his says, “he is a good guy, meet him,” after which he hears you out and says yes to your partly sanitized but still very risky-by-Bollywood-standards film, holy mother of comet-astroid union, you have gone legit, Star-Greater-than-Studio in most cases, hence you get the studio, hence there is now 99.99% possibility of distribution and muscle power at exhibition, better show timings and maybe a long shot at a satellite sales. This film not only gets made but will also be seen by many possibly. God bless that courageous star, and here I am not being sly, God really bless that star and that studio.
A risk is a risk is a risk, calculated or otherwise. Somehow this has come together and this is more of a miracle than finding a real alien in Area 51 and sharing your script with it.

One thing you forget to mention to everyone, the film is a drama-thriller, with a happy ending…but it also has a politic thing in the backdrop, so much as subtext that when it was green lit no one really noticed. Since no one asked, no one said a thing.

Film gets made, goes to the CBFC! *Cue Conjuring/Insidious kind of MUSIC*
While no one got the subtext even as a close knit team, in a completely different context the CBFC gets it with additional subtext from the sentimentally charged. 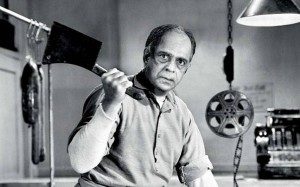 If you forgot the journey – it started with rejection and more rejections and partial artistic success with financial failure, enlightenment, sanitization, comet and asteroid union, star gets studio, courageous film made, money and pride at stake for star, studio, producer, filmmaker’s 50000 days of Summer invested. The release date has been carefully aligned as to not clash with any big Hollywood release or any big Bollywood release. Any weekend here and there, BLOODBATH.

“We need U/A for satellite.”

Minds come together, studio and star together take a courageous decision here: okay, let’s go with A.
We’ll handle the satellite loss, genuine tears, APPLAUSE.
Credit where it is due, the filmmaker really has no control or say over this, the studio and the star have to back this ballsy decision and they do.

By now the energies have come together, this happened and no one is going to sell out in the last mile.
Let’s go for it. Let’s do this.

Let’s play this at short film corner instead?

The system has been created to sanitise you at every corner and somehow you juggle through all of that, and somehow, against all odds, make it…then CBFC!

First, the conservative commercially viable actors were cautious, now they go ultra-cautious before attempting anything off the center, and probably read it but never commit to any of this. Studios, even if it has a star, might think a 100 times and eventually say NO.
And the filmmaker, who was Clockwork-Orange-Stage-One-Sanitized, will go on to say, “I was cured alright.”

Lets go right back to the top, the metal detector and the casual submission to it. My city and my nation was conditioned to it after multiple riots, bomb blasts and gun fires. All this made sure that every citizen gets frisked before he or she enters any area of cultural gathering. As a teen I was shocked when I entered Aurora Talkies to watch “Bombay” and was frisked for the first time before I entered a cinema hall. Years later it is common practice, we submit to it, we never even question it. Ask a 15-year-old at the mall why he or she has to be checked. They will agree it has to be done and maybe they are right, it has to be done. This is how it is, this is how we queue, this is not even an issue.

I am sure we are not going to be frisked and be alright all the time.

But then Alex was NEVER CURED…ALRIGHT.