(This review is originally published on CatchNews, written by Rahul Desai)

Twenty-six-year-old Raam Reddy’s Kannada-language Thithi is a droll little South Indian village tale that belongs in spirit to the cantankerous Asterix comic universe – rich in experience, texture and family dysfunction. The Gaulish village in question is Nodekoppalu, a rural-Karnataka Mandya district backland, where every character exists more than just to solely grace the eleven-day time phase of this film. 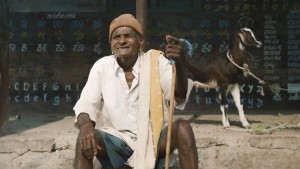 The title refers to a traditional post-death Hindu ritual, which, apart from collecting bones of the deceased after cremation, includes a feast that marks the end of the mourning period. It opens with 101-year-old Century Gowda (Singri Gowda) – incidentally, a moniker that reiterates a familiar Indian obsession with landmarks and records – dropping dead during one of his mid-day rants. It’s funny how these things work; his abrasive self is as good as dead to onlookers when he is alive, but his legacy comes alive with a vengeance as soon as he passes away. When he whiles away time ragging at every passerby, the way senile old loonies do, they shrug it off as if he were a frothing stray. Moments later, he becomes the “legendary Century, pride of all regions.”

What follow are spiralling consequences of the drama behind this ‘Thithi’ function, an immodest feast that involves feeding mutton to 500 villagers. As a result, flocks of oblivious, well-behaved sheep appear on screen, invariably evoking lip smacking grins (by carnivorous viewers) about the ‘soup’ they may find themselves in. 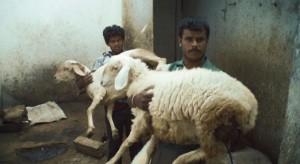 Reddy patiently constructs the semi-unhinged, freewheeling travails of the three generations of Gowda sons – starting from the top with Century’s son, “the bearded one” Gadappa (Channegowda), who is the father of the current breadwinner Thamanna (Thammegowda), father in turn of the youngest, Abhi (Abhishek H.N.). In cases of families, it’s often money and property prospects, less than genuine memories and grief, which unites predecessors and precipitates them into solvent mind spaces. 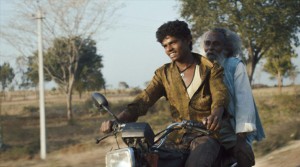 Gadappa’s presence is a curious one, that of a potion-devoid druid Getafix off his rocker. A restless soul who never realized his dream of exploring the country, he spends days embarking on custom-made adventures: walking in random directions, swigging cheap Tiger Brandy and smoking beedis. His spaced-out silence is a result of deep sacrifice and resentment, much of which we hear about later – after he nonchalantly joins a merry band of traveling shepherds. He pauses, and repeats a line twice, while harking back to how he became a widower – the only window we ever get into his suppressed being. Thamanna’s greedy plan of packing Gadappa off for six months to fake a death certificate, fool the babus and claim his inherited land hasn’t quite worked out. 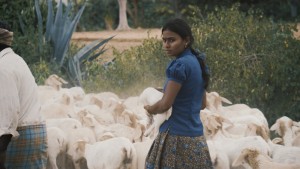 Meanwhile, Abhi’s brazen pursuit of the shepherd daughter raises visions of the ladies’ man his great grandfather once was. “You looked back,” he insists, after noticing her turn in his bike rearview mirror – a quasi moment likely fueled by the family’s religious consumption of idiot-box soaps and movies. There are a few other very cinematically agreeable characters – a cynical priest whose sole purpose is to generate whataboutery, the village simpleton, and his hysterically matriarchal and foul-mouthed wife.

That they’re real locals with no acting background whatsoever appears to be more than just an indie marketing pitch. I don’t know a thing about the region’s linguistic quirks and culture, but I begin to understand – and expect – each face to react a certain way by the end. It goes beyond mere authentic delivery (occasionally, their reactions are a bit staged; you can sense the director’s struggle to get them moving), but one tends to knowingly smile or wince before they even speak at times.

Reddy’s remarkable sense of framing – static minimalistic compositions with characters entering and exiting – props up his wry observational style. Thithi thrives on this environmental matter-of-factness, situational drama, and the novelty of letting these scenarios unfold through primal human instinct. I can’t begin to imagine the kind of man-management Reddy and his team saddle themselves with; the script, co-written by one of their own, Eregowda, lends itself to plenty of overlapping banter and establishment, given that there’s (rightly) not a shred of background music.

What Thithi really represents, though, is the subjectivity of goodness – and normalcy – in intensely patriarchal setups. Gadappa grew up in the shadows of a perverse, immoral father, and grew old beyond the shadows of a materialistic thankless son. In the Gowda evolution chart (think the ape-to-human graph), also an interminable loop of oppression, Gadappa doesn’t quite fit in between the three figures. 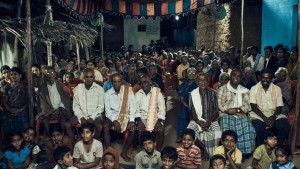 Abhi bares the raging genes of, both, his father and great grandfather; one doesn’t sense he will chase the gypsy girl after their tryst. Thamanna is well on his brash way to emulating Century; he will probably force Abhi to get married just to have another lady in the house, and could live on till he becomes an embarrassment to his family.

But Gadappa, who outwardly seems like the sore misfit, is actually one by choice. And contrary to public opinion, he is, in fact, the sane one. He has long transcended the frailties of civilization, and finds a sense of blissful detachment – both, metaphorically and physically – in his adopted tribe of migrating shepherds.

Reddy ends his own tragicomic exploration with a solitary shot of the bearded one. Oblivious to the burning flame warming his hands, his figure reflects a life that has found salvation too late, an image that makes us a little sad.
Yet, Thithi finds its root and redemption in him, which is quite a happy thought. On looking back, the uncomfortable chaos feels like a cheeky, hopeful one. At least, one feels, he is still healthy enough to savour this epiphany. And for that, we have Reddy’s unobtrusive storytelling to thank. 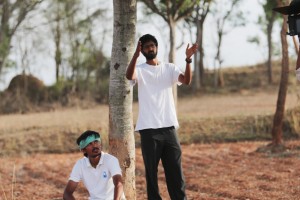