A wannabe wise ‘trade’ guy told me recently – if there are no stars, the O.S.T. is doomed because who gives a damn about music? (What has music got to do with an O.S.T., after all)?

Turns out he was right. 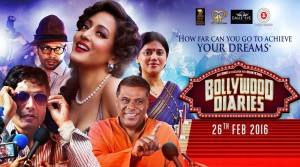 I say this because when I came across the music of ‘Bollywood Diaries‘, a well-acted recent film by K.D. Satyam, it didn’t surprise me one bit that the movie had already gone off screens. No surprises either that the label hadn’t bothered putting the music out for sale on iTunes or any other popular platforms. In fact, the jukebox proudly mentions the music is available on hungama, but no more than 2 songs are present there. The film has (surprise!) all of 5 tracks and they are excellent, to say the least.

In this rather extensive post, allow me to take you on a journey filled with melody and exquisite poetry, one song at a time:

MANWA BEHRUPIYA
Although this song has a lot of ‘Arijit-ness’ on display, thanks to the pop-like pace, you will end up humming this song, largely because of its lyrics. Nothing forced, no one trying to sound intelligent — just plain magic of words. Vipin Patwa, the composer, also gets behind the microphone, and doesn’t do a bad job at all. I particularly love the way Arijit sounds vulnerable in this song. If not for him, then for the excellent lyrics, I do urge you to listen to this at least once, and then decide for yourself. We all can do with a bit of hope. This lovely song gives us precisely that.

MANN KA MIRGA
You really don’t come across a lot of melody that has a pucca element in it. Mann Ka Mirga is a glorious exception to this rather annoyingly true facet of the times we occupy. It is such a relief to see the Nooran sisters being used in a way that doesn’t have them call out to ‘Baba Bulleh Shah’ or shout ‘Allah Maula Yaara’. Another version of the same song has  Javed Basheer and Pratibha Singh Baghel, and it is equally good. The superlative sarangi use is ghazal-like, but doesn’t weigh you down. The guitar solo portion is refreshing in a way some old songs used to be when there was actually a structure and not just a pre-functioned template to songs.

TITLI
What complements the earthy singing by Papon is that excellent sarod, and some truly heart-stopping lyrics in Titli. I don’t think anyone has penned the romanticism and complexities of a struggle this beautifully in a long long time. “Khwabon ko sach karne ke liye, titli ne saare rang bech diye” — and in comes the gut-wrenching Sarangi. No words can explain this near-perfect fusion of music and lyrics. At the risk of making you a bit sad, this would probably be your favourite song. It will stay with you for a long, long time. Take a bow Papon, and take a bow Vipin! Soumen Chaudhary has also sung Titli, but somehow the version sung by Papon works better.

PIYA KI NAGARI
In these days of living (and dying) by the template, most of our makers are forcing musicians to manufacture similar tunes that tell us “look i am in love dinchik dinchik boom boom *autotune*”. Pratibha Bagel’s Piya Ki Nagari is a short and innocent song about love, which doesn’t really fall in any ‘template’ — a timely throwback to an era far removed from the loud and utterly blinding commercialisation of romance. Thank Heavens for this. You can actually hear a voice — actual singing, I kid you not — and not software produced robotic chirps.

Of course, they say that if you do not fall in line and create ‘what is working today’, you will fall off the radar. With this music album, the makers and the composers have done exactly the opposite. The sheer honesty of the effort, the sincerity and belief in their content — it blew my mind away and restored my faith, if only for now. Not all is lost. So what if the music labels are trapped in churning away at their own mediocrity? A time will come when music will matter again, and this album would then perhaps top those overlooked charts. We are in March, 2016, and I am already quite sure that this will be one of the best Hindi music albums of the year. A testament, and almost reconfirmation of this fact, would be it not winning any kind of awards or recognition. But it has made me soar a little, write a little, explore its world a little, and that’s all one can ask for from good music.

Meanwhile, you can listen to the songs in jukebox here:

The composer doesn’t want the credit for the song ‘Mann Ka Mirga 2’, because he didn’t record that song. How did it get into ‘jukebox’?
Well, Long live labels. Music? Well, what about that?