Our World, and Theirs 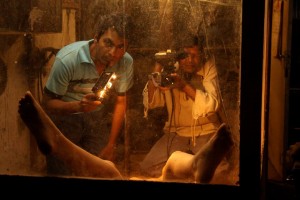 Any piece of art has an intricate, important relationship with time. Because it’s the considerable passage of time that allows us the luxury of judgement— to see whether time has rendered the piece antiquated, distorted its meaning, or made it more valuable. The D-grade horror films will tell you that time has been especially cruel to them. What was once supposed to scare and titillate people has now become a source of raucous guffaws. To begin with, director Ashim Ahluwalia doesn’t even need to parody that world; that grotesque world parodies itself. Which is perhaps why Miss Lovely’s opening shot is not a hat-doff to that world, it’s that world itself.

Miss Lovely opens with the footage of one such actual film from the ’80s. It’s difficult to resist a chuckle — the visibly scared protagonist, the over-decked ‘ghosts’, the in-your-face props. We come out of that world when the scene cuts to Sonu (Nawazuddin) putting in a fresh set of film reel, and we are transported to a different world on-screen: now, the images on the screen are meant to arouse you; we see a women caress herself with a brown feather, trying to seduce not only the man on screen but hordes of them off-screen too. (The sudden out-of-sync sex scene might fox you for an instant, but if you think about it, how different is it from an item song in an ‘A-grade’ film where the story stops to make way for an item song, placed to serve our baser instincts.) Sonu is suitably transfixed by this transformation too. But, you aren’t sure if he’s bewitched by the on-screen seduction or by the crowd’s reaction. Because when you make cheap porno for a living, your definition of arousal, sexuality ceases to be normal.

Miss Lovely is some sort of an architectural marvel. Its world is so meticulously crafted that you don’t have to go to the ’80s, the ’80s come to you— the ornate false ceilings in the hotel lobby, chandeliers that call attention to themselves, tattered briefcases, lumbering automobiles, dank hovels. It’s one of the few movies in recent times—and I hope this doesn’t sound like an exaggeration because it isn’t—that I can watch on mute for the most part. Also, few minutes into Miss Lovely, and you understand that Ahluwalia’s main concern—at times the only concern—is form, not content. But it doesn’t prevent the film from reaching out to you, in fact, it aids the way the film unfolds, talks to us.

Also, the apparent ‘lack of story’ is anything but that; in fact, beneath oodles of style, I found two stories hidden: One, Sonu’s (Nawazuddin Siddiqui) coming-of-age story, him trying to break the shackles, trying to be a ‘man’, who is only answerable to himself, and his insatiable desire to be in a world where he belongs, where he’s not a misfit, where his desires not only have value but aren’t scrutinized like objects; the other, a story of these small-time players on the fringe who want to abandon this world. There’s a seductive lure in this world but it is only ephemeral, something they are aware of. That the party cannot go on the entire night. The next morning will bring its own horrendous hangover. Most of them are scared of the hangover. Ahluwalia doesn’t point us to these two separate narratives though; we become aware of them almost as an afterthought, through sporadic tension-riddled conversations or the way certain scenes wound up, contrary to our expectations.

It’s also quite interesting that Ahluwalia uses a lot of objects to infuse humour. So, a midget—presumably both casting director and producer—pours whisky from an unusually shaped, giant bottle of whiskey, which hilariously dismisses all notions of proportion. And, in another scene-within-a-scene, the skeleton revolves ever so slowly, and just about when it faces the camera, its skull tilts to one side as if acknowledging us. Nothing could be more apt markers of this world, where the characters are not the source of humour but the quirky symbols that embellish it. 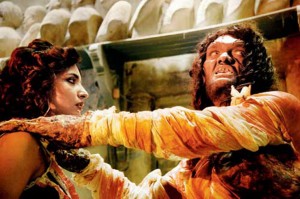 Miss Lovely also comes at an interesting time, when there has been a sudden surge in interest for these films. And while their shoddy quality may amuse us, what’s more interesting, here, is the filmmakers and their vision. If the definition of an auteur is an artist’s allegiance to his vision so much that it keeps recurring in his subsequent works, then these filmmakers are auteurs too; their films are also work of art because they exist to not please others or seek validation from someone else. It’s heartening that Ahluwalia recogonizes this, and doesn’t go overboard with milking the milieu’s kitsch.

Ahluwalia also excels in painting the wide chasm that exists between this hidden, nether world and the seemingly respectable world out there. He rounds it up with a beautiful climactic scene that delineates this dichotomy. In the film’s final scene, we follow a dazed Sonu, moments after he’s performed a ghastly act. His bloodied shirt and googly-eyed expression would make him stand out anywhere else, but not here, where people are desperately trying to outdo each other in becoming caricatures. His transformation is finally complete. He’s broken the shackles; he’s become a man he had always wanted to. There’s no one looking over his shoulders now. He might have become perennially deluded and irrevocably mad, but he has finally found his niche. And he confides in us for the last time: ‘Maine jo chaha, maine wo paa liya (I got something I loved).”

Can you really argue with a man who’s lost it but, at the same time, also content?

(Tanul Thakur is an independent film critic and journalist. You can read his blog here.)