Fandry: The Shame Of Being Different

One of the more fascinating things about falling in ‘love’ when you are barely a teenager is a complete lack of knowledge. Not only about your own self, but also about whom you have fallen for, and most importantly, love itself. Much wiser and older people have spent years understanding what love is and how and why it both crushes and liberates us. But for a seventh grader, the decelerations are firmly in place: I love you. And I am ready to do anything for you. Even if that means sacrificing my life for you. Jabya, Fandry’s protagonist, is not shy of these avowals. It’s only natural, you presume. For someone as young as Jabya, who barely knows the girl he so likes (he hasn’t even struck up a conversation with her), his definition of love can at best be unidimensional: it hasn’t been tainted by disappointment yet. His flights of fancy don’t shame him.

However, what shames him is his standing in the society. He’s an untouchable. And, time and again, he’s reminded that he’s different. Unlike his classmates, Jabya cannot attend school when and, as he likes. On days, he must either serve as a substitute for his mother at the marketplace or assist his father in catching pigs. This embarrasses Jabya and he makes no attempt to accept this fact or hide his disgust. Perhaps this sense of shame comes from the fact that he didn’t choose to be different, it was thrust on to him. But what’s more interesting here is, how the different characters deal with this shame: Jabya is obviously repulsed by his status, his father, on the other hand, has resigned to his fate long back and only hopes that his son follows his footsteps soon, his mother is also similarly indifferent. It’s also noteworthy how Jabya’s classmates perceive him— consider the scene where Jabya goes to meet his classmate, Venkat, to ask about what was taught in the class the previous day. Jabya and Venkat are separated by the gate of Venkat’s house; the latter stands just inside his house answering Jabya’s question. He doesn’t invite Jabya inside the house and although there’s no sign of animosity between them, you understand that perhaps Venkat knows that Jabya is not like him. We know this because on seeing Jabya, Venkat’s mother doesn’t refer to Jabya as his classmate but identifies him by his caste. Venkat’s conditioning has already begun: Here, look at them. You don’t have to be rude to them, but make sure that you maintain a distance. They can never be you. 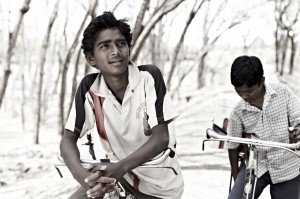 Nagraj Manule, Fandry‘s director, often indulges in irony and symbols. Sometimes they are too obvious—not that there’s anything wrong with it—and they help getting the point across. For instance, as the teacher starts teaching about the work of a Dalit poet, whose poem gently cautions people against easy discrimination, at the same time the class cannot help resisting a chuckle when it sees Jabya’s mother peering through the classroom window. The disconnect stares at us: between what’s being taught in the class and what’s being absorbed. Or, the scene where Jabya looks longingly at Shalu and soon her bunch of friends are scandalized because a pig has rendered one from their group untouchable. And behind Jabya we see a painting of B.R. Ambedkar on the school wall. And had the film indulged itself in magic realism, Ambedkar would have shaken his head slowly— disbelief mixed with disappointment.

Besides the class conflict, the film also explores and examines the shame of poverty. And, initially, whenever the film alluded to Jabya’s poverty or addressed it directly, it made me immediately uneasy. Mainly because delineating something as grim as poverty in the movies requires a lot of skill and this predicament has been used—or rather abused—so much in our cinema that you sometimes wonder that it would serve our filmmakers and their films well if they rather stayed away from it, which is a pity because it still remains a reality for the large part of our population. Hence, it’s heartening to discover that, in Fandry, Manjule doesn’t use poverty as an easy ploy to tug at our heartstrings. Instead, his characters—particularly Jabya—don’t surrender themselves to it; rather rise above it without incessant, overt complaints. So, Jabya uses steamed water in a steel container to iron his clothes because he cannot afford an iron box. When Jabya is taken over by a model’s well-shaped nose and wants to have the same facial feature, he tries to shape his nose by a clothespin. Manjule seems to be telling us: Don’t worry about or pity them. They will figure a way out.

It’s also one of the reasons the film is endearingly funny for the most part. The shame can just be a part of your life; it can never be your life. Especially when you are barely a teenager. Manjule allows Jabya his well-deserved flights of fancy, the shenanigans with his friend, his playful obstinacy against his parents. But the disappointment in Fandry invariably lurks around the corner. The chirpiness of adolescence is almost always cruelly interrupted by the harshness of the world. And it’s a strange, little world: where reverence is so misplaced at times that it borders on the absurd. Consider what’s probably the best scene of the film, where Jabya’s family is out on the streets hunting for pigs, and as they are tantalizingly close to ensnaring one such pig, the national anthem from a school nearby begins playing. Jabya’s father, an unlettered man, is suitably perplexed on seeing his son and others stand in rapt attention. He doesn’t want to. For he’s ready to leap at the pig. But he’s helpless; he has to stand motionless and let the pig wander away. He had not made this choice. Just like Jabya, who didn’t choose being born as an untouchable, just like the audience made to stand for the national anthem before the film begins— an act that’s again bereft of a choice. And precisely why it’s so pointless and frustratingly comical at times. For that brief moment, Jabya’s father is us: the sum total of all our disappointment, frustration, and helplessness.

Even the metaphor for dirt—pigs—in the film is equally fascinating. What makes you really ‘dirty’? The film asks us this question a lot of times. Can anything make you untouchable? As the film nears towards its end, we see Jabya mocked once again by his classmates for being a Fandry (pig), for being dirty enough to wrestle with those filthy animals. But this time Jabya doesn’t stomach the insults silently. He loses his calm and begins hurling stones at those bullies. He’s finally found the pigs he wants to go after.

(Tanul Thakur is a freelance film critic and journalist. He blogs at https://tanulthakur.wordpress.com)