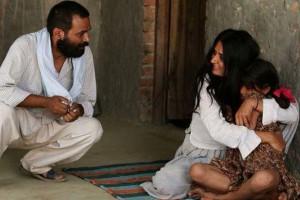 Kajarya plays out like a relevant op-ed piece written in the wrong language for the wrong magazine. Its downfall lies in the medium it chooses – that of feature fiction – to touch upon issues that deserve a steady, elementary approach to storytelling.
Though I suspect that the trendy “documentary-style” treatment here is more an unintentional side effect of technical limitations than a conscious creative decision.

The film opens with the titular Kajarya (Meenu Hooda) presiding over a disturbing ritual in an obscure Haryanvi village. It soon becomes clear that she is at the center of a female infanticide racket; her Goddess Kali avatar is a theatrical ruse to carry on these ‘sacrifices’ under the garb of worship. It also becomes clear that she is a mentally unstable participant, drugged and abused by the twisted men behind this. Simultaneously, Meera (Ridhima Sud; too superficial), a newbie Delhi journalist, stumbles upon this hidden world in search of a story. Predictably, these two distinct lives collide to bring across the gender-bias-knows-no-boundaries moral of the story.

I’ve learned to be wary of movies that end with statistical revelations. In this case, the number is quite astounding – 3 millions Indian girls have been killed in the last decade. By then, however, this feels like nothing but a necessary slate, because the preceding events have failed to make any impact. It becomes evident within the first few frames that its director Madhureeta Anand, an experienced documentary maker, is not quite at ease.

I can understand her decision to shoot at live locations with non-actors, but her obsession with point-of-view shots is incomprehensible. Unless someone pointedly speaks into the camera, it becomes impossible to identify the narrative from its characters. This lends a tacky home-video feel to proceedings, instead of an intended psychological depth.

Though the village makes for a stifling murky atmosphere, its inhabitants look mismanaged and awkward. Miss Anand goes a step further and even uses real editors (C.P. Surendran) in the newsroom, but again, it all looks too engineered. At one point, Meera bursts into the editor’s cabin breathlessly, “Do you know what’s happening in this country? Babies are being killed”  I stopped listening after that.

Like many peers, Miss Anand too furthers the lazy habit of portraying Urban India as a Madhur Bhandarkar-isque cauldron of hollow words, cocaine, atrocious reporters and evil men in order to contextualise the magnitude of rural atrocities. A few noteworthy scenes – one that involves her boyfriend’s (Sumeet Vyas) selfish sex manners, and another that has a posh family reacting to ‘hinterland’ news – get lost in the smog of low-budget clichés. Meenu Hooda tries hard to bare her soul as the afflicted Kajarya. But there’s only so much one can do, when armed with expletives, alcohol and incompetent colleagues.

Madhureeta Anand is probably different from the many storytellers hitching a ride on the women-empowerment bandwagon, but this film’s form suggests otherwise. It’s surprising that film festivals seem to have taken notice. Perhaps this is related to the puzzling involvement of Qaushik Mukherjee (known as Q to indie aficionados) as co-producer.
Noble intentions aren’t nearly enough nowadays. Kajarya is a classic example; and it only reiterates the need to strive beyond being a hard-hitting headline.