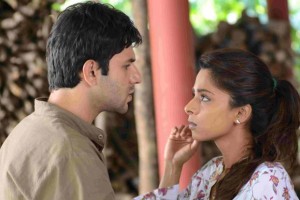 Dev Anand Kariappa (Arjun Mathur) is a tortured soul. He is a wannabe Sanyasi who hasn’t quite been able to renounce the world yet. The traumatic incident that brought about his joblessness is expressed in glossy, old-fashioned flashbacks—all of which may have looked fairly convincing on paper.

I can understand why director Manu Warrier – one of the early PFC (Passion For Cinema) enthusiasts – wants to tell this story. What I don’t understand is his ways, and his rather placid presentation of the soul-searching, fidgety (say, a Ranbir-Kapoor-finding-himself saga in a parallel, bleak indie world) material.
Anyway, back to Dev Anand, who sort of represents most disillusioned, frustrated youngsters these days; they want to do something drastic, and perpetually contemplate it, and seek attention for contemplating it, but they don’t quite go through with it. Here, he sells off his family’s coffee plantation in Coorg, which is a pity, because he is in dire need of a steaming cuppa throughout the film.

Arjun Mathur (Luck By Chance, Fireflies) has this restlessness about him. Thematically speaking, he has that angsty ‘indie’ gait, which makes him an ideal face for the typical, low-budget, existential, quarter-life crisis. That he has a disenchanted mother here, who curses him before passing, adds to his passage of self-discovery. He must redeem himself by buying back the plantation—an intention that is unclear once he is hired by the new owners, his ex-girlfriend (Sugandha Garg) and her annoying corporate-refugee husband (The ever-sidey Mohan Kapur). The title concerns the chatty husband’s obsession to mollycoddle the crop in time for seasonal bloom. This is, of course, mere decoration to place this story in some kind of interesting environment – and it’s not a bad one. Plantations, which are routinely looked at as more of a retirement investment these days, suggest all the young things: growth, evolution, energy, fertility, changing seasons, torrid moods and, in some cases, (unconditional) love.

Mr. Warrier clearly believes in stark simplicity. In doing so, he takes the independent spirit to an unfortunate level—a static meditativeness most (wary) viewers envision when they hear about ‘festival films’.
The pace is almost non-existent, the frames devoid of character or colour, the music loaded is with spirituality, while his actors look like they’re being told how to emote depending on the exact length of their takes. The filmmaker visibly strives for an uneasiness to Dev’s interactions. An example is a bonfire scene where Dev finds himself alone with her; a classic recipe for that vulnerable moment, but their stilted conversation fades to black mid-way, the sun rises, and the advent into extramarital bliss must begin again. This is what I call the ‘writer-turned-director syndrome’, where between-the-lines action like “the moment passes” is translated into abrupt transitions on screen, and expressions are reflected in strategically placed mirrors. Out-of-focus shots and differently lit angles in the same scene, clearly results of time and budget constraints, stand out like a sore thumb. I was going to start this review with “for a first film…”, but then, that’s half the battle lost if it looks like one.

The humour is odd too; Dev’s friend – a Bengali woman, who exists only to amuse with her broken English, prides herself as a rich man’s ‘keep’ and calls him, yes, Dhoni. Not to mention a bizarre sequence that involves off-screen elephants, misfiring rifles and a silly pre-finale accident. Rookie Central.
Mathur had impressed in ‘Fireflies’, but that seems like a long time ago. When he isn’t required to speak here, he does too much with his face, and only shines during those tailor-made outbursts. Sugandha Garg can do far better as the woman torn between her past and future, and Mohan Kapur is forever a victim of his own post-colonial dialect.

Indies need not strive so obviously to be anti-establishment. The story of a man-child torn between remorse and wounded love is a complex one to tell. This was perhaps the one natural environment that needed some indulgence – an atmospheric, sensual aspect that could have atoned for awkward storytelling.
‘Coffee Bloom’, unfortunately, only reiterates the importance of strong fine black coffee, if only to get through the movie.

(This film released in select Indian cinemas on March 6th, 2015)