See much evil, hear no evil 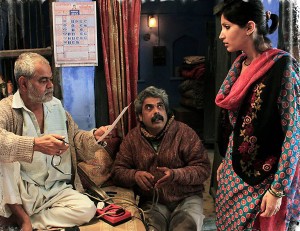 His name is Krishna Das.
I’ve always been fascinated by him. He is the smiling old man – some say he has spent years as a hermit and has abandoned all materialistic possessions – at Juhu signal with a placard that reads, ‘Follow your religion. Love Everybody’. I always smile back. For that moment, he is much more than the Holi Man he is known to be. He is more than just a man spreading a simple message. His face lights up when our eyes meet. And then I notice, after I’ve passed by, that his face lights up similarly – the same kind smile, almost surreal in its purity – whenever somebody looks at him. It’s sort of ironical that most people smile at him sympathetically, and most purely out of curiosity, bemused and unable to believe that an older adult would spend half his life at a crowded city signal. Many, like me, pass him by and ponder about life and feel inspired for about half a minute, till the next signal. The bubble bursts soon after.

But I’ve often wondered about why and how he decided to do this. He doesn’t care that he’s a mini-celebrity by now. No sir, his presence there has a deeper meaning – one that, in all likeliness, is related to Godliness and peace.

Bauji (Sanjay Mishra) in Rajat Kapoor’s wonderful portrait of meditation, ‘Aakhon Dekhi’, gives me a slight insight into the circumstances that form such souls.

There is no sudden moment of enlightenment or earth-shattering truth. In Bauji’s case, he has a change of heart once he realises that the young boy his daughter has chosen isn’t so bad after all. Reputations in his old Delhi locality are sold cheaply, after all.
In fact, Bauji ends up emulating Mr. Das to establish no particular purpose. Even he stands at a crowded circle with the message, ‘Everything is here. Open your eyes and look.’ All they share in common is others’ momentary belief in them. They pass him by, either with a frown or a smile, and soon forget about him. But that’s me, that’s us; what about the man at the centre of it all?

His disbelieving friends call it Male Menopause and his family calls it a ‘midlife crisis’. Like Mr. Das, though not spelled out (thankfully), Bauji eventually becomes more of a Messiah without knowing it. He becomes a symbol of a clean hope that once existed – when life wasn’t about money, phones, or even families. It was just about human nature, and understanding and forming one’s own perspectives and principles. No amount of external influence could change that, once you cut out the external world.

In this tiny Delhi-6 locality, and around the world, people don’t fear—but blindly follow—what they don’t understand. Bauji understands that. First they will mock him, then they will be scared, and then, maybe then, they will wonder if he is actually onto something. That is when the human mind wakes up, and deeper – not necessarily truer – meanings begin to surface.

If a man suddenly decides to believe in only what he sees or take an indefinite oath of silence, he must be more; he must be more than just a father, brother and husband. His frustrated wife (a flawless Seema Pahwa) reluctantly realizes this, and even understands when his brother (Rajat Kapoor) wants to move to a new house with his family. Her grief is definite; she knows what follows. While Bauji is still struggling to free himself of worldly possessions, socialising with a loan shark who perhaps understands him the best, and seeking real tigers for proof that they roar, his daughter (Maya Sarao) navigates her way towards a future.

I have rarely seen a better ensemble cast, with actors so natural that you wonder if there’s actually a camera in those cramped rooms. The house, the spaces, they just exist – that’s how good the production design is. They make you believe in the plausibility of Bauji’s meandering phase. Voices come from all directions, and somehow, they all make sense, and yet they don’t; I shuddered at the thought of incompetent sound designers lurking the halls of these chaotic households. Thanks to Rajat Kapoor’s sound basics – this is the most un-Rajat Kapoor film I’ve come across – I became an integral part of their banter, urging them to unite the two (cold) warring brothers. The moment of resolution is pure and incidental—a final calling card for Bauji to seek his path.
Sanjay Mishra is so serene and endearing. One look at his sincere face will immediately tell you that a journey of self-discovery to Europe is not an option for the masses. Instead, he must achieve penance within the limits of his existence. Instead, like Mr. Das, he must settle for finding temporary meaning in the mountains.
There’s an odd obsession with bookending Bauji’s story, but I suppose a character piece demands a beginning and end – even if both converge into the same point.

I believe that when a man nears the end of his life, he starts worrying about what he will be remembered for. Rajat Kapoor’s charming little film debases this theory – with a portrait of an enigmatic old sod, adamant on proving that infinity is just a number.

By Bauji’s choice of logic, though, this review is of no use; it’s second-hand information, which may or may not be true.
You’ll just have to “see” this film yourself to believe me when I say that ‘Aankhon Dekhi’ is one of the finest films of 2014. Or, perhaps, the finest, and the beginning of Sanjay Mishra’s second innings.
If only he stops being Bauji in every film that follows, and chooses to create new memories, and new characters. For now, though, this is where it all began.