“Making a film is like organising a wedding from the bride’s side.”

Rohit Joshi, the director of Marathi film ‘Bhatukali‘, has worked as an assistant director (at various levels) for ‘Bheja Fry’ filmmaker Sagar Ballary.
He knows what it takes to make a film come to life, right from the grassroots. More importantly, he knows about coming up the ‘assistant way’ in big bad B-town, and has some very useful anecdotes and advice for young, aspiring filmmakers. 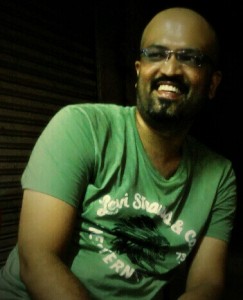 You turned director with Marathi film ‘Bhatukali’ after assisting Sagar Ballary for a long time. How influenced were your sensibilities and craft after those years? Was the idealism of 2007 still present in 2014?
A. My idealism remained intact, but my sensibilities and craft had definitely evolved in those 7 years. After entering the industry in 2007, I had the most idealistic views about filmmaking, films, taste and ambitions. I was blindly passionate about everything. I didn’t have any practical experience; I had just directed a few short films. On this basis, I had made assumptions about feature-length cinema, which I thought would help me in my work as an Assistant Director, and ultimately, while making my first feature film. But practically, in the real world, once the lights come on, nothing ever remains the way you plan or expect it to be. I realized that, to make my first feature film, I needed to learn the tricks and trade of our industry – because ultimately, whatever people say, it’s a business. It’s a very complex profession, where business and craft (must) go hand in hand. Nobody (especially first-time filmmakers) gets to make a movie the exact way they want to, unless they’re fiercely independent and self-funded. One has to figure out ways – and a balance – to achieve the desired results, even if there are n numbers of obstacles in the path. It’s all about management of resources. In my case, I got complete support from my producers and my team, even though we had limitations of our own while making a regional film.

Many people use the writing route to eventually direct their own film. You climbed your way up to chief AD first; how difficult was it, and how much does director-loyalty matter?
A. Director loyalty is a very subjective thing. It varies from one professional to the other. Some directors change their team after each film and some stick to the same team because of the comfort zone. Sagar likes to work with the same team on all his films. We developed a good equation over the years, so he retained me on every film. When I passed out from XIC (Xaviers Institute Of Communications), I was full of hope and enthusiasm. I wanted to assist somebody and get practical knowledge as soon as possible. I was just 22 and I had voluntarily plunged into the deep ocean of Mumbai’s film industry. And fortunately, I didn’t have to struggle much to get my first job. My teacher and mentor from XIC, Mr. Vikas Desai (VD Sir) recommended my name to Sagar Ballary. Apparently Sagar was also his student from SRFTII, and he was looking for an intern for the post-production process of his 2nd film Kaccha Limboo. And that’s how I got my first job.
My first assignment was to capture all the making-of tapes and mark the interesting shots. There were 138 tapes, 60 minutes each. The making-of guy had covered all the schedules, and each and every important moment was captured. I finished grabbing the footage in 15 days; 7 to 8 tapes a day means 7 to 8 real time hours. But it was fun. Without being present on the shoot, I learned all the basic jobs that an AD is required to perform. So, by just going through all the 138 tapes, I had procured basic practical knowledge of the shooting process of large-scale Hindi film. I figured out that there’s a huge difference between theoretical knowledge and practical knowledge. So I got an upper hand while assisting Sagar on his next film, ‘Hum Tum Shabana‘. He gave me more and more opportunities.
Due to certain circumstances, I was made the chief A.D. on ‘Hum Tum Shabana’. It was my first film, but Sagar trusted me a lot. I was very nervous, but I made fewer mistakes. I understood that an assistant director must always be alert, and have thorough knowledge of all departments. So I started taking keen interest in everything. Then, things became very easy. I built a great rapport with Sagar. I learnt a lot from him. He guided me during my toughest times, and also encouraged me to learn more and more related to every aspect of film making. With his help, I developed my own perspective as a filmmaker. Ultimately he went on to produce my first feature film, ‘Bhatukali’. He liked the script and immediately approved it. He never interfered in the creative process or even the execution process. He gave me full freedom to make the film the way I wanted to make it – but within the given budget. Because I had worked with him for more than 6 years, he knew me and, more importantly, my approach towards filmmaking.

Many say assisting on films is the most humbling and ego-destroying job in the industry. Why so?
A. This is true. But I would say it is also the most interesting and demanding job. There are two sides of this coin. Most of the times, it depends on the director and your team. It could be the best or the worst experience of your life. You get a lot of opportunities to work on different scripts in different conditions on different scales. As an assistant, one is expected to listen to and obey the director, and help him/her to achieve the desired results, even though one might not like or agree his/her ways/process to achieve it. But the whole experience can help you figure out your own way to execute your own films too. From my personal experience, before making your first film, you must assist a director at least on one film – just to learn how an assistant thinks and works, because ADs are those who work on your film the most, both mentally and physically. They have to be the most selfless souls, and expend immensely to execute someone else’s vision. On the brighter side, an assistant gets to make mistakes and learn at someone else’s expense, and still manage to get a fixed salary!

You shot your debut film in 17 days. Clearly, all your expertise as an assistant came into play. Tell us about the experience.
A. Yes, my experience as an AD really helped me a lot while making ‘Bhatukali’. I wanted to make a Marathi film. Fortunately, I found producers who trusted me and gave me their full support. Not everyone is as lucky in this sense. Being a regional film, obviously there were limitations in terms of budget. So I decided to save as much money as I could. This works at times, but it could also backfire. Also, the story was such that I didn’t need more than 5 to 6 locations. But still, it was a herculean task to finish the film in 17 days. I knew if I planned it well, I would be able to execute it in time. I must admit that I got the best team to work on my film, including my Assistant Directors. My Chief Assistant Director Vivek Jadhav and other ADs made sure that everything went smoothly. It was a memorable experience. We shot the whole film including two songs in 17 days – without compromising on the quality of the film.
For me personally, it was a great achievement. The best way to explain my experience is the analogy I often use: I think making a film is similar to organizing a wedding – from the bride’s side. Let’s compare it: I think the bride is the director. The bride wants her wedding to be the best in the world; every director want to make the best film in the world. The producer is the father of the bride. The father, who wants his daughter’s wedding to be the best, but always takes a realistic approach because the budget is limited. The actors are the groom. Bride’s father has to take care of the groom and his needs; producer has to bow down to the actors’ demands and tantrums. Bride’s mother is the DOP. The mother wants her daughter’s wedding dreams to come true but also knows the father’s financial limitations. Ultimately, all the guests (baaraatis) at the wedding are the audience in the theatre. And it is a proven fact that a grand, lavish and the best weddings are remembered only because they served the best food in the world. In a film’s case, food is the content, or it could also be the entertainment, subject to the genre and script.

Many youngsters nosedive into the industry by becoming assistants first. What should they expect? How must they approach these tough years?
A. The youngsters who want to enter the industry by becoming an assistant first – I would definitely say it is a good option. Try to work on different kinds of films with different genres, irrespective of quality and box-office performance, and simultaneously write your own film (this is important!) As an assistant, build your contacts and try to expand your professional circle. The best part about being an AD is you get to work with the best of technicians in the industry. Ultimately, you will find your own team which will help you make your first film. There could be good days when you will get films back-to-back, or some horrible days when you will not find a single film. When you don’t get films, you get frustrated. This experience also teaches you a lot. The key here is patience. Work on your own films and scripts in these tough times. Have patience, things will always work out in your favour one day. Just be sincere, throughout.

Have you known people who are ‘specialist’ assistant directors – those who treat it as an independent career choice instead of a stepping stone? Is that a culture here?
A. I know a few people who are specialist assistant directors. But it’s not a culture here. It is slowly picking up. I feel an assistant’s job has its own shelf life, because it is a very demanding and exhausting job – plus there are limitations in terms of career growth. I don’t think many people would want to opt for it as a permanent job.

How financially viable is the job? Isn’t it difficult to sustain a livelihood going from project to project?
A. If you get to work on big-budget films, then there’s no problem in terms of money. It is financially very viable. The payscale for assistants these days is pretty good. But those who are not fortunate enough to get films on a regular basis can think of other options – such as assisting on advertisement films or corporate films in the meantime. But one should never lose sight of the primary ambition – money or no money. Find a way – and your destiny will follow you.