Strangers in a Strange Land

It’s an interesting coincidence that the opening shot of Bidesia in Bambai is similar to that of Dhobi Ghat— an overcast Mumbai evening shot from the taxi lumbering on the road; introducing us to the protagonists, both migrants, solely through their voices. But, unlike Dhobi Ghat, Bidesia in Bambai is not an exotic, romantic take on the city. Surabhi Sharma’s documentary is a sharp, gritty account of the numerous faceless Bihari migrants—battling for space, identity, and empowerment—and the ways in which music gives them a sense of purpose. 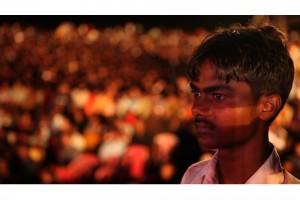 Ramanuj Pathak is one such migrant. He earns a living from driving a cab, but as the documentary unfolds, his real calling is revealed: writing and singing Bhojpuri songs. The double life of Pathak is a fascinating story in itself but his struggle to belong in his adoptive city makes it more complex. Even though he has lived in Mumbai for over 15 years, it is still “Bambai” for him, and he, a Bidesia here (someone who leaves home). On the other end of the spectrum—both financially and artistically—is Kalpana Patowary, a singer from Assam, who is now a renowned singer in the Bhojpuri music industry. However, her unfamiliarity with the nuances of Bhojpuri also makes her a stranger to her adoptive profession. While recording songs at the studio, she often has to stop and grapple with the diction of the lyrics. It is this sense of alienation that links Patowary’s very different story to Pathak’s.

Sharma eschews the conventional tropes of documentary filmmaking— tropes like voice-overs, talking heads and expositions. The narrative that emerges from this economy renders the documentary the aesthetics of a narrative feature. Sharma is not interested in hand holding and guiding the viewer through the narrative. New characters or scenes are seldom introduced through texts or voice-overs. Instead the director trusts her viewers to plug the missing pieces themselves. “I end up having conversations with people. So, even if I have a specific set of questions, but during the conversation if the person leads me away from my questions to a different realm all together, I happily go along and that determines the structure [of the film],” says Sharma. It’s this controlled chaos that makes Bidesia in Bambai compelling. In popular notion, documentaries in our country are still looked down upon for being ‘boring’, or ‘instructional’. This one then is a fitting rejoinder: pulsating with energy, music and striking visuals.

In the age of YouTube, Bhojpuri music is ubiquitous and yet very few people attempt to understand its context before judging it. Bidesia in Bambai is a strong counter-point to such cultural parochialism. A lot of it results from where Sharma places herself in the film. She acknowledges that she herself is an outsider to the culture of her protagonists and is sensitive to this sense of the other. She is careful not to reduce her protagonists or their milieu into symbolic kitsch. “I, as a documentary filmmaker, am really caught up with, and very critical of my gaze,” says Sharma. “I have a huge problem if there are moments when people are laughing at what’s happening on the stage. When Pathak cracks a joke, and if people laugh then I feel relaxed. Because then you are laughing with him, not at him.”

The film also deals with gender politics in a direct way. Sharma goes to a lot of testosterone-charged, male dominated spaces, which can seem both exclusive and intimidating to a woman.  For Sharma, visible markers of her class and her profession helped her to negotiate these spaces. “Even though I was entering a space, which had 20,000 men, there’s a certain privilege you come with, in the way you look, you have the equipment, you get a certain position irrespective of what you do,” she explains. “So, in that sense, I have never felt threatened. You just come and people accept you. No one is trying to test the power equation.” This equation brings forth a benign, accommodating facet rarely associated with these migrants. “Everyone seems to now think that the single male migrant is going to attack all of us middle class women. So, it’s very important to try and get a sense of that space without slotting it easily. In the end, in the Chhath Puja, it’s a very charged space, which brings out very crass identity politics, but equally, that same space can become a place for one of the most vulnerable and marginalized people in the city,” says Sharma.

At the core of the film is the marginalization of the migrants in Mumbai. It keeps cutting back to the hapless state they often find themselves in—their houses and music studios are frequently demolished—and the grit with which they keep at it, rebuilding, even retaliating, when pushed to the brink. During a live show, someone from the audience throws a stone at one of the performers on stage. The organizer intervenes and snaps back: “Don’t think that we don’t belong to Bombay.” When Sharma set out to make the film she was only looking to explore the city, its migrants and their music. The politics of their marginalization is the story that found her along the way. “What was revealing to me was the city,” says Sharma. “I thought here I was looking for the production and circulation of music, but it took me to spaces where everything was precarious.”

In one such scene, the camera slowly pans over Adarsh Nagar, a decrepit area in the northern suburbs of Mumbai that used to house music studios of a lot of Bhojpuri artists, including Patowary’s. Studios that have just been demolished. Sharma asks them what will happen to the ‘industry’ now that they have lost these studios. “The industry keeps growing and moving, here and there,” she is told. “This is like an ocean, madam. The caravan is only going to increase.”

Tanul Thakur is an award-winning film critic and journalist, formerly of The Sunday Guardian and The Big Indian Picture. He blogs at https://tanulthakur.wordpress.com.