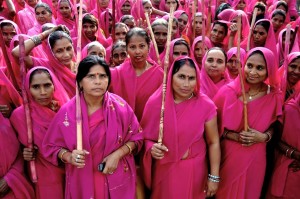 Directed by filmmaker Nishtha Jain, Gulabi Gang is a documentary, an unflinching representation of a real world, not to be confused with the 2014 mainstream Hindi film Gulaab Gang (starring Madhuri Dixit and Juhi Chawla).

Based around the Banda district in UP, the film follows a fascinating ray of hope amidst an epidemic of patriarchal darkness: a vigilante gang of rural women armed with lathis and dressed in pink saris.
Not unlike their fantasy counterparts, recruitments happen by the hour. There is nothing inglorious or epochal about them. You can imagine awkward behind-the-scenes happenings, where brave ladies of different ages, shapes and sizes appear confidently for the ‘exams’. Not all of them make the cut though.
Like the cameras employed by Jain, the selected ones are omnipresent. They don’t look the parts, which is why they’re even more fascinating to watch.
Their mission is simple – to spread awareness and fight violence against women.

On the face of it, there is a feral aspect to their existence, a dangerously flimsy feminist undertone punctuated by loud militant personalities – none more so than their fearless ‘antar-rashtriya leader’ Sampat Pal Devi, a figure we are carefully acquainted with, through a handful of gruesome cases, as the film progresses.

Soon, we learn that there is more than a method to this madness.

Devi is no character in a drama; she is genuine, yet flawed.
Her lack of education is precisely why she has had the guts and gumption to stage this bizarre coup-militant outfit. And yet, at no stage does she let blind rage overrule her remarkable and mature reading of situations. At times, it feels like we’ve stumbled upon a dark ‘True Detective’ set; it’s this sinking aura that the filmmakers capture so sharply, even during their idle moments.

When called to the scene of a charred body, she becomes a no-nonsense human lie detector.
Her frustrating journey through this case is what connects us to an unsuspecting universe that has earned its notorious stripes. In this hell lower than grassroots, poverty meets submissiveness to make everybody an innocent murderer.
If anything, her 250,000-strong global gang is the sanest segment of the simmering environment that surrounds them. Something’s got to give.

The filmmakers employ a simple technique that demands involvement on our part. Nature is used as an elaborate ruse. Various shots of the village, its people, fields, children and farming serve as a reminder of normalcy being bred amidst startling inhumanity. One glimpse at the gang’s rare introspective moments, frantic eyes behind a brave façade, and we are left with unspoken broken images of their past.
A strand of hopelessness tinges even the positive moments, like their minor electoral victories and successful convictions.

One particular instance involves the father of the murdered teenaged girl who adamantly believes it was her destiny.
He drives away in a tempo after refusing to cooperate with Devi, and the camera pans to a curious bunch of onlookers in the field nearby. All of them are men of different ages. Gradually, they disperse as the camera continues to linger on them. The youngest of them, a teenager, remains. He trudges away. The final empty frame is perhaps a telling symbol of dissipating attention spans in light of routine atrocities; a reminder for women to hold a steely gaze long enough, hard enough.
Look them in the eye and they will flinch first.

It is impossible not to wonder if the featured authorities would have behaved differently if there were no cameras hovering over them. How many of their decisions and reactions come down to Devi and her relentless pressure is anybody’s guess, but I suppose every documentary must cope with this inevitable margin for error.

Despite this consciousness, this still makes for a compelling – if only modular – study of a group not incapable of recruiting the nearest octogenarian yelled at by her bratty SoBo grandson.
That they wear pink saris, otherwise considered to be the defining symbol of domesticity in this nation, only reaffirms their forceful existence in the ‘male-dominated’ field of vigilantism.

Gulabi Gang is an ideology, a searing exercise in awareness. A nation, often riddled with questions about its attitude towards the fairer sex, needs cracked mirrors like these. Let the reflections be ugly.

Sampat Pal Devi was ousted as the leader of the gang two months after this film’s Indian release in May 2014. However, her spirit remains.