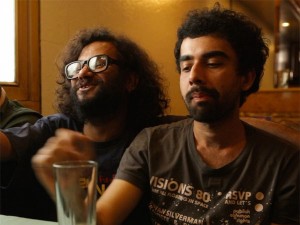 There are writers, authors, bloggers, journalists, freelancers, and there are TV writers. And then, right at the bottom of the food chain, there are struggling film writers: the ultimate embodiments of tragicomedy, and perhaps the most fascinating souls to observe in their natural habitat.

Sulemani Keeda, debutant director Amit Masurkar’s take on the familiar world they inhabit, is mildly reminiscent of Kevin Smith’s iconic slacker comedy Clerks.; not only in (lack of) plot and to-hell-with-it tone, but because it’s really about nothing.
But it’s an authentic nothing, the irreverent kind of nothing anyone around the Mumbai suburb of Versova—the geographical harbinger of celluloid dreams and rants—can relate to. Protagonists Mainak-Dulal, a broke writer-duo fluttering across dim-lit house parties, book stores, studio gates, shady producers and poetry slams, look like nothing too. Mainak (Tewari) is a commercial blockbuster; loud, desperate, foul-mouthed and edgy, while Dulal (Kasturia) is a dark Indie; naïve, brooding, talented and uncompromising.
Their ambitions remain blissfully misguided until aspiring photographer Ruma (Vasudev) and desi Tarkovsky-wannabe Gonzo (Mirchandani; amusing) enter their struggling lives.

This film resembles an extended inside joke at first, but it oozes truth and experience. It’s impressive how Masurkar manages to cram visual exposition of an entire profession into three days of his characters’ droll lives. He extensively uses cheeky production design and snappy cuts to establish routine and characters. Ruma’s room is loaded with books that define her, Mainak’s shelf has world-cinema DVDs ready to inspire (literally), and Gonzo’s walls are adorned with portraits of European auteurs. A psychedelic animated sequence involving Gonzo’s cat, cocaine and a fishbowl is outrageously innovative.
More importantly, the humble treatment—handheld cameras, real locations and non-actors—is in sync with the stark meagreness of its subject. Thankfully, penniless artists don’t find themselves in flashy songs, showdowns and designer environments. Instead, simple music montages take Dulal’s sweet (mental) infatuation with Ruma forward. Dooor, in particular, is a track with a breezy ‘Wake Up Sid’ aura; it merges the city seamlessly into the movie.

Remarkably, I’ve seen these guys. You have, too. They’re in coffee shops all day, one-room hall-kitchens and Alibaug farmhouses. The casting is immaculate, even if a bit obvious. Tewari and Kasturia internalize every pore of their being; Aditi Vasudev (Do Dooni Char) has that flaky part girl-next-door, part game-changer way about her, and she uses her theatre experience to good effect in the final few scenes – scenes that are known to be melodramatic on silver screens, but are rightfully restrained and awkward in Masurkar’s world.

We’ve lately seen so many shiny self-referential movies about movies, but none as self-aware and poker-faced as this charming little indie effort. There’s Do-It-Yourself written all over it, but in no way does that compromise on the character pieces; in fact, this treatment adds to the intrinsic lack of confidence and self-respect of the folks being explored.

If you’re of the opinion that Luck By Chance is the definitive B-town film of our times, chances are you will appreciate this appropriately low-budgeted, homegrown writer rendition. Closer to home, in more ways than one.