Being in control is a situation many artists strive and crave for.

But her route to grasp control can be puzzling for many. For what would be an impediment for most is an advantage for her: her inability to see. Although she has been robbed of a significant bodily faculty, but that does not make her hinge-less. She’s guided by intuitions, mostly aural, which allows her to document things she considers worthwhile. But how much of your environment can you really control? And even if you believe all your art has been a byproduct of what you really wanted to document, can you really make that tall a claim without sounding hypocritical?

One afternoon, she’s travelling by an auto rickshaw and she hears two passersby on the street fighting. She gets down, inches closer to the scene to document it through her camera. Later, while discussing the same photographs with her boyfriend, she rejects one of them saying, “it’s accidental”. The shot in question was borne out of a rickshaw blocking one of the passersby, causing only his minatory finger directed towards the other to be seen in the frame. She presumably rejects that picture because she didn’t create that part of the environment. Fair enough, if you are consistent.
But then, for someone who cannot see, how much of her environment can she really control?
Could she really control the birds’ wings in motion, which rendered one of her photographs singularly evocative, or the child’s playful gaze at the chessboard with his mouth wide open? It’s a rare false, contradictory note in a story that’s consummately consistent. 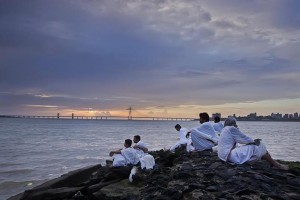 Her view towards her art changes when she gains the ability to see. There’s a beautiful scene, where she’s standing at the edge of the road and trying to do what she does best – archive the moment. But now, on the contrary, her new bodily faculty does not aid her. There’s suddenly too much to see and too much to hear. She doesn’t know what to trust anymore. The aural has suddenly married the visual and they both don’t have an identity anymore. She doesn’t know what to do with this new sense of betrayal. She had limits before, but she was in a way limitless; she is limitless now, but she is in a way a lot limited. Just the idea itself is beautiful and profound, what’s in your mind and what’s in your body.

But is it just the distraction?
In another scene, which is in sharp contrast to the aforementioned scene, Aaliya finds herself amidst the snow-capped mountains. Distractions are minimal here. There’s no one to be seen around barring the landscape; there are no interfering sources of sounds either. The moment is present, kneeling in front of Aaliya, almost pleading to be documented. She elevates her camera to comply. But seconds later, puts it down. She lets the moment pass by. Moments later, she sits on a log of wood, and her camera cover slips out of her hand and gets washed away by the stream of water. She sits there quietly, not doing anything, letting another moment pass by. When you finally understand that you have been robbed of control, how much can you really fight?

But I am not entirely sure and convinced how this story ties up with the Ship of Theseus paradox, not that it necessarily needs to, but the movie’s construct points us towards that. In Aaliya’s case, it’s not a replacement but an addition. If Theseus’s ship had a vital plank missing, and if one added a plank there, would that move be for better or for worse? Common sense says it would be for better. Gandhi doesn’t necessarily think so. And that thought, right there, is what made the story for me. “Why is it so fascinating to not have any limits?” replies Aaliya to a journalist earlier in the story. That’s the point; deficiencies, or the lack of them, can be so personal in nature that it’s scary.

The second story opens to Maitreya, a monk, sleeping on the floor. He hurriedly gets up in the middle of the night. He has to reach somewhere. We soon understand he is fighting against the pharmaceutical companies for inflicting cruelty on animals. If you don’t know Maitreya, in all probability you would brush aside his apprehensions by two words: ‘How cute.’ In a city, where majority of the human beings are no better than animals, how naïve and romantic are Maitreya’s concerns? But what really sets apart Maitreya’s character and this segment of the story is the character’s sense of humour. 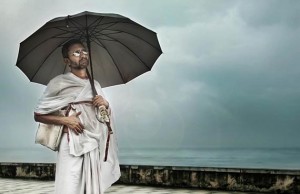 Often, philosophy’s bastard child is self-seriousness.
The ability to take oneself so seriously that one often obliterates his sense of belief, or blur it. In that case, the world and its infinite unanswerable questions can lead to a heartbreaking delirium. What keeps one sane in that case is one’s sense of humour. The ability to laugh at oneself; the ability to laugh at the world, and the ability to both laugh at oneself and the world.
Ship of Theseus could have so easily slipped into that sloppy territory – the obsession to present something breathtakingly new and an obscene, desperate want to arrive at a point. But Maitreya’s, and his friend, Charvaka’s, sense of humour gives this segment of story not only a lease of life but also a centre of belief.

The verbose banter between Charvaka and Maitreya is enjoyable not only because it’s ingeniously funny, but also because it instantly humanizes Maitreya. He is no longer a symbol who’s acting as a mouthpiece for the director; rather he’s a character who has a life of his own. It’s all the more important because he’s playing a monk. The second story’s narrative could have been yawningly boring had it been aided by a solemn, self-righteous monk, who thought the entire world was out to get him. Rather he’s just doing something that gives him a “sense of purpose”.

But surprisingly, the only minor grating part of the story is the dialogues between Maitreya and Charvaka. As enjoyable as they are, they sometimes border on exposition, constantly telling and reminding the audience what Maitreya’s view points are. And this choice is a little difficult to fathom, because we all know what Gandhi can achieve when he just lets his characters be in their world.

But it’s incredible that Gandhi is able to pull off this segment of the story pretty well too, and again, it works because these are people. Call them naïve, call them foolishly romantic, call them disconnected, but you get a sense of where they are coming from. That’s the most a director can do for his characters. He just needs to open the door for a time long enough that we, as an audience, can enter their world. It’s not about agreeing or disagreeing; it never is. It’s the desire to sit close to them and be empowered with the ability to understand.
So when Charvaka asks Maitreya: “why are you doing all this? Do you think anything is going to change?” That’s the same question the cynical-me would have asked Maitreya as well. And that’s the same reason this segment of the story could have become unwieldy ponderous. But that doesn’t happen because we know where Maitreya is coming from. So, when we see an emaciated Maitreya answering the question with a seemingly simplistic, “then how does anything matter?” The answer suddenly becomes anything but simplistic. Because more than anything else it’s about a centre of belief.
If Maitreya steadfastly believes in one then who is Charvaka or I to refute that?
This scene reminded me of a line from Amitabh Bagchi’s novel, Above Average:

“Everyone lies. More than pointing out the lie to the person, it is important to know if he himself believes in the lie or not.”

But even in this segment of the story, The Ship of Theseus paradox isn’t materialized literally. Here, it’s the prospect of a plank being replaced — a potential liver transplant — that tumbles Maitreya’s life in a drastic fashion. Unlike Aaliya’s story, Maitreya’s story only talks about the transformation. Most unresolved conundrums in movies make for a beautiful, lyrical ending. But in case of Maitreya’s story, surprisingly, I would have preferred it to go the whole hog. I wanted to see the progression or the transformation of Maitreya and his world post the organ replacement. 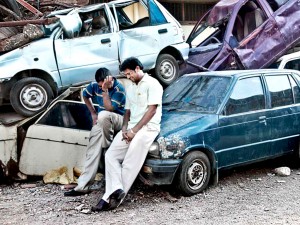 Navin, the protagonist of the third story, is a misfit amidst Gandhi’s first two protagonists. Because Navin is someone, who’s not that articulate or well read, unlike Aaliya or Maitreya. His grandmother obliquely hurls the invective “shallow” at him. But, what unites him with Maitreya is his sense of right or wrong, which can again be perceived by some as morally linear, but that’s who he is.
In one of the later scenes, he is sitting in a corner in his friend’s living room in Stockholm amidst a bunch of foreigners. The camera slowly closes on him and suffocates him for space. I could imagine Aaliya mixing seamlessly in that setting, even Maitreya, but not Navin. He just doesn’t belong.

It’s quite interesting how Gandhi constructs and approaches all these stories. You not only see the stories charter new boundaries – both ideologically and geographically – but also the way Gandhi handles the emotional graph of his characters. And he does it quite astutely by gliding down the Maslow’s pyramid.

The first story, albeit very consistent and ingenuously sharp, appeared a lot sterile to me. Gandhi is almost mechanical to the fault there with respect to showcasing the quagmire his protagonist is grappling with, maybe also because the world of that story is centered on the economically affluent. With monk’s story, Gandhi steps down the economical ladder a little bit, but the problems again are not monetary, although they become a lot grim because they deal with life and death, and with the third story, Gandhi goes to the base of the pyramid, here the problems are about basic survival: of life, death, and just hanging in.

And Gandhi executes all the three disparate stories with such assuredness that it’s pleasingly astounding.
It’s so rare to come across a movie, which has so different visual and emotional idioms and yet, in the end, they all blend with each other. His grasp over the mundane and the absurd is quite firm too, and it’s gratifying because it comes across in a narrative like this. So in the middle of a heated exchange between Navin and Shankar, Navin’s corpulent friend gets stuck between the two walls, and with only excruciating difficulty is able to hand over the cell phone to Shankar again. Navin comes out of the police station, and in the same frame two female cops are busy playing badminton. That itself becomes a small scene within a scene.

At the end of the third story, Navin isn’t sure what exactly did he achieve. By his own account, he couldn’t do much. His grandmother consoles him, “Bas itna hi hota hai (This is all that can happen).”
It doesn’t require a reiteration that we, in the major scheme of things, are all specks. But as Maitreya would like you to believe, if you don’t matter, then, “how does anything matter?”
It’s a simple thought but also, at the same time, empowering. We all make peace with our own little, neat answers.

Tanul Thakur is an award-winning film critic and journalist, formerly of The Sunday Guardian and The Big Indian Picture. He blogs at tanulthakur.wordpress.com