Film Critic Rahul Desai looks back on some works of conviction and truth in 2014; all of them largely independent, unnoticed, small and brave Hindi films that defied convention. 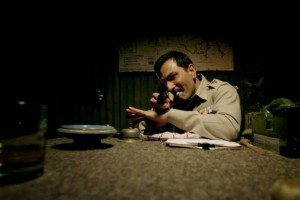 With a limited release in May ’14, this has been one of my strongest cinema experiences of the year. A soul-sucking, well-acted and uncompromisingly dark Bangladesh Liberation War tale, Children Of War drives home the brutality of the infamous genocide by intertwining three separate hard-hitting human stories with remarkable poise. It’s far from perfect, often meandering into indulgent spaces of vacuum instead of letting one thread derive another, but director Devvrat’s imagery creates an overall sense of impending doom. More importantly, this film will be remembered for one of the most spine-chilling villainous performances in recent history: Pawan Malhotra, as the vile Islam extremist Pakistani officer Malik, in charge of a prisoner rape-camp. He snarls, smirks, menaces and almost reaches out to tease viewers into hating his very existence.

Actor Sasho Satish Saarthy effectively brings to life the story and tragic events surrounding 27 year-old Shanmughan Manjunath—an IOC Officer murdered for sealing corrupt petrol pumps in rural UP. While there are certain techniques I do not agree with—namely Manjunath’s point-to-camera monologues, out-of-context music and a rather indulgent narrative—Saarthy (mildly reminiscent in gait of R. Madhavan) and Yashpal Sharma’s desperate performances redeem an emotionally complex tale that achieves what it sets out for: An education, awareness, and an overwhelming feeling of injustice. 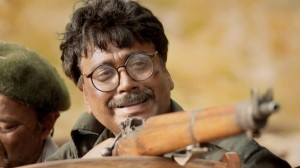 Despite its monotony and attempt to overcome its meagre budget with poetry and philosophy, Raaz’s directorial debut is technically sound, occasionally amusing and a unique anti-war drama. Shot at a single location in No Man’s Land between India and Pakistan (a set on Fiji, apparently) with engaging actors that rise above the script, the film stands out for its unerringly sentimental and conversational take on war’s oldest rivalry. Manu Rishi endearingly embodies petrified Indian cook Shastri, and entertains the randomness of violence with opposite number Ali (Raaz)—a hot-blooded Pakistani-army puppet who softens, before being undone by a scrambled climax. 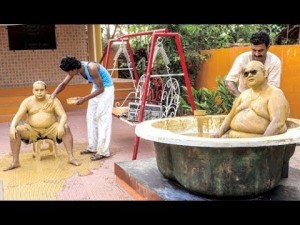 Slow-burning chaos ensues in a communal town after two religious communities squabble over the identity of a dead man. This appropriately-titled socio-political satire refuses to take sides, stops short of singling out a sole protagonist, is devoid of a background score, and depends on a carton of energetic characters popping about with a simmering heaviness. Watch this particularly for a few immaculately-conceived sequences; a deaf scholar unable to hear slaughter outside his door, a gang of wailing chest-beating women conversing in sobs; scenes that could be looked back on as classics in the years to come. 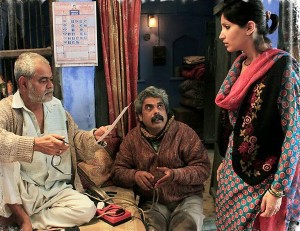 You will rarely see a better ensemble cast (Seema Pahwa, Maya Sarao, Saurabh Shukla, Namit Das, Rajat Kapoor and others) as they combine to create a meandering portrait of much-loved ‘Bauji’ (Sanjay Mishra; his finest), and his struggle to achieve penance in the midst of a baffling midlife crisis. Their banter is familiar and lived-in, their environment uncomfortably real and their lives relatable, as they navigate their way through Bauji’s perception of principles and inconvenient oath of silence. Mishra’s career got a much-deserved second wind, and he now appears in a movie almost every week. A forcibly-ponderous climax aside, this sweet film is everything one expects from one of the pioneers of authentic independent cinema. 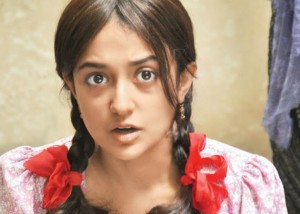 Playback-singer-turned-actress Monali Thakur plays the titular role (a 14-year-old girl forced into prostitution) with utmost sincerity, and rescues Kukunoor’s manipulative ways (as actor and director) from the depths of unrelenting darkness. Moreover, Ram Kapoor and Shefali Shah play their parts with experience, lending credibility to a melodramatic film that is perhaps in danger of solely being remembered for Satish Kaushik’s topless scene. 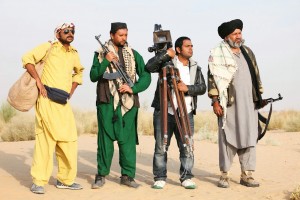 A feeling of disappointment after a dramatically pointless third act is relative; it only arises because I’ve rarely seen a homage crafted with such potential, love and respect for the medium. Filmistaan—a fiercely original film about a kidnapped camera assistant (Sharib Hashmi), his militant captors and a reluctant film-buff host (Inaamulhaq; stands out)—rests on a string of charming moments; these scenes encapsulate the madness of movies so well that one wonders why little evils like Intervals, preachy cross-border messages and songs find the need to exist in the same space. 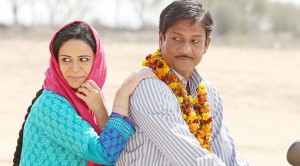 It’s not easy to keep an audience captivated through a political satire. Balancing wit with topical relevance is a challenge, not to mention the task of somehow weaving every quirk of every semi-believable situation into an uncomplicated motion of events. After Dekh Tamasha Dekh, Zed Plus, directed by Dr CP Dwivedi (Chanakya, Pinjar), is another largely well-crafted example in 2014. What works in its favour is the primary thread of an ordinary man in an extraordinary situation. In a modest Rajasthani town, humble puncture-wala Aslam (Adil Hussain) is mistaken for a pious Godman and awarded Zed security by the desperate PM (Kharbanda) of a struggling coalition government. As expected, he becomes a political pawn in a bizarre chain of events that attempts to greedily address everything short of world peace: from corruption, democracy, communalism, and terrorism to adultery, friendship and love. I almost feel guilty for being let down by a long-drawn third act, which could have been at least 20 minutes shorter.