“You can work with us only if the script excites you.”

MASAAN, written by Varun Grover and directed by Neeraj Ghaywan, is releasing in Indian cinemas on July 24th.
After speaking to the writer, we now speak to the director of the film that took Cannes ’15 by storm. 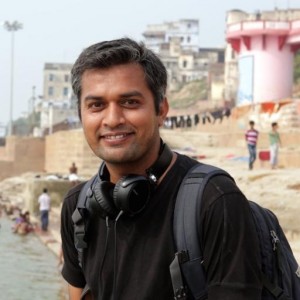 In your opinion, what is the secret to MASAAN’s unprecedented international appeal?

A. This film is very real and very honest. We Indians wear our emotions on our sleeves. I have noticed that unlike us, people in Europe keep their feeling buried inside them. Many indie films today understand the importance of shooting in realistic locations and situations, but with the objective of “being international” fail to do justice to the way Indian people experience emotions.

So, because it is “truly indian”?

A. Yes, exactly. No matter where you are in the world, the core emotions between a father and a daughter, for example are the same. Everyone can relate to them. Masaan stays true to these emotions and I think that is why people around the world can relate to it.

It’s your first full-length feature film after the acclaimed short ‘Shor’. Tell us about working with the cast and crew? What was your mindset going in to the film?

A. The most important thing about the making of the film was that the team was full of debutants.
The fact that it was the first film for so many of us made it so much more exciting, and so much more important to everyone. You don’t realise your limits on a first project, which is a good thing for unrestrained vision. When we were looking for people to work with us, the first thing I would do is make them read the script. I would say, “you can work with us only if the film excites you.” The first day of filming, I made sure everyone knew that there was no hierarchy here. There was no “sir” or “ma’am”; everyone was free to voice their opinions.

It sounds like the perfect creative space! How much do you think this helped the process and final product?

A. That’s what we were trying to create. For the film to be honest, we had to be honest while making it. We were like a bunch of friends working together on something we were really passionate about. We had a similar world view, we were from similar middle-class backgrounds. Most of all, it was established in the beginning that the film was above us; no one was above the film; this really helped us stay true to the story and I think, is the reason the film turned out the way it did.

Can you tell us more about the relevance of the story; of these characters, their stories and how they reflect the current climate of the country?

A. India is in a mode of change. The smallest towns are now being viewed by the whole world, but in the middle of all this progress, there are a lot of things that hold us down; stereotypes and mindsets that stop us from achieving our true potential. The youth of the country yearns for a change.

And this drive is the common link between the characters?

A. Yes! These characters are all young and curious and driven and their attitude talks to the present Indian mindset.

What would you say if someone asked you bluntly: why should I watch this movie?

A. You should watch this movie because it breaks barriers. It is entertaining. The meaning of the word “entertaining” being different from Bollywood’s usual song and dance. It is entertaining because it has romance, humour, passion, emotion and most of all, it is real. People walk in to independent films prepared for something that is “artsy”, slow, even boring, but this film is creative. My office staff showed as much enthusiasm after watching it as my friends; even though I had told them to be brutally honest with me and I still found that everyone loved it.

Tell us about your journey in the film industry. Do you have any advice for aspiring filmmakers?

A. Movies were a part of my life since I was a child. My family would watch the films shown on Doordarshan together. As I grew up, I became more and more interested in the technical aspect of filmmaking and began looking at film from an art-form perspective. I worked with websites like passionforcinemas.com and wrote about film. It was when I worked with Anurag Kashyap that I could finally see my thoughts on film turn  into practices. I then began experimenting with guerrilla filmmaking and formulated my opinions on the economy of filmmaking.

The advice I have for any aspiring filmmakers is to be honest; to stay true to the stories. There are two extremes of filmmaking that you need to stay away from: spending too much money on unnecessary things and on the other, compromising on the quality of the film and its story in the quest to save money.
Both these extremes lead to a tacky product. You must remember never to compromise on the dignity of the film.