Not many seem to have heard about Surkhaab, an independent well-acted Indo-Canadian tale about a Bhatinda-based Judo champ (Barkha Madan) who illegally migrates to Toronto to live with her younger brother.

Directed by Sanjay Talreja and produced by Barkha Madan and Vivek Kumar, it released in the same week as Tanu Weds Manu Returns (May 28th) this year. 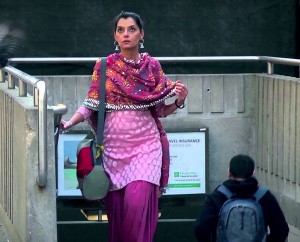 The more patriotically inclined will tell you that there’s no such thing as Canadians in Canada. Or that Toronto (‘Tronto’) is a swim away from Bhatinda.

But tell that to Jeet—feisty Judo Champ, 28, and notably for her widowed mother, unmarried—who encounters Punjab’s overseas capital with the wide-eyed reluctance of Rani from Queen. Barkha Madan, whose face still haunts high-rise-dwellers (in and as Ramgopal Varma’s Bhoot), invokes empathy as this illegal immigrant; one of many sorry ‘stories’ walking through Customs with ill-fated hope.
Because in her possession is a bag, whose contents Jeet should’ve checked as soon as she became a mule for shady trafficker Kuldeep (Sumit Suri). However, she is informed in no uncertain terms that curiosity could burn, if not kill the cat. But then, even Tom Hanks didn’t open that package in Cast Away.

This bag leads to a transition in genre: kidnappings, ubiquitous crooks and repeated phone calls, tilting the tonal scale from Aa Ab Laut Chalein to a fairly realistic document on migration and human spirit. It stops short of turning into an unnecessary comedy of errors, distracting from the initial simplicity of a journey gone wrong.

Director Sanjay Talreja employs a time-jumping narrative that connects Jeet’s chaotic predicament to events in India leading up to her departure. The further she sinks, the more we learn about her.
Miss Madan’s uncertain gait and worried face conveys a lot about Jeet’s childhood without pesky flashbacks. The abrupt way she must leave her mother is heartbreaking; familiar to those forced to abandon family homes for a quick buck and an invisible future. The circumstances that force her into this situation aren’t all that convincing, but they’re known to happen.
Sync sound, gloomy climates and live locations further amplify the intensity of her bleak situation. Sumit Suri—the standout in a 2014 debacle called Babloo Happy Hai—continues his crude Jatt act, equipping Kuldeep’s doofus ways with an appropriate slyness. He seems to excel in the dialect, and would do well to continue playing to his strengths.
The supporting cast, comprising of the a motley group of displaced nationalities inhabiting the same house, engages even when bag-vati causes characters (and writer) to spin in circles.

Many Indians leave in search of a better life, convinced that a dollar-wielding pauper is more respectable than a rupee-wielding pauper.
Surkhaab exposes their naivety, albeit with dignity, despite an awry third act that threatens to dilute the strength of its hero.

As a frustrated Kuldeep wryly notes, Jeet eventually lives up to her name. In a way, this film does too.

(Miss Madan produced this movie before renouncing the world, and becoming a Buddhist nun named Gyalten Samsen at a monastery in Dharamsala)