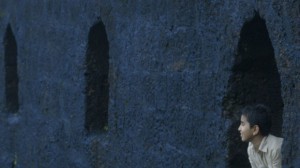 I remember being a child fiercely averse to change. Most of my insecurities and fears stemmed from the hovering possibility of shifting base early in life, away from my school and friends.
At such an early age, ‘home’ is a strong and lasting word. There can only be one.
Every other city or town after that is a destination, places that will forever be houses detached from the familiarity of hometowns. They could be prettier, scenic and far more comfortable, but there’s nothing quite like the comfort of childhood homes, even if they’re dilapidated hutments built over sewers.

Chinmay (Deodhar) finds himself in this unsettling phase of his 11-year old life.
What makes his experience even more haunting is the fact that this change has been forced upon him by the untimely death of his father. His life has turned upside down. He feels sorry for himself, and is yet to feel sorry for his mother.
She (Amruta Subhash) has been transferred to a beautiful Konkani town somewhere along the coastline.
But for Chinmay, Pune—a city far less intimate—is home.

His heart and his parents belong there.
It’s where he grew up, and excelled at his studies.
It’s where he became the ‘scholar’.
But now, here he is, uprooted from his school, his housing society and environment into a sleepy town he had never heard of.
There’s a beach, stream, lighthouse, creek, bridges, coastal roads, hills and of course, a fort.
None of it matters to him.

Avinash Arun, a cinematographer par excellence, fashions a quiet and insightful transformative period of this child’s life. This is only a tiny portion of what is to be a fruitful life, but it’s possibly the most important portion.
He directs every heartbeat and every moment of the child’s struggle to adapt and accept new conditions. He doesn’t need to show us why Chinmay is an introvert. Just imagining what the kid has faced over the last few months is humbling enough.

Arun’s keen observational eye and visions of this town evoke an interesting feeling. I watched Killa back in October at a film festival.
When I tried to remember the film, parts of it came flashing back to me like a dream I was forced to wake up from. They had no beginning and end. Portions of Chinmay’s house, a surreal fort, an enigmatic fisherman, his boat, fancy cycles, jackfruit curry, compass boxes and torrents of rainfall flooded my mind.

And then it hit me.

That’s what the filmmaker has created here: Memories. Thin moving strips of Technicolor nostalgia.
Recollections and souvenirs of a life that isn’t even ours. But it feels like ours, especially if we reminisce about the film.

I suspect that if Chinmay grew up into a fine young man and looked back on a phase that changed him, the exact same visions would flash through his mind in no particular order.
Like me, all he might remember is the season, and like me, he could even associate monsoons with everything gloomy and bad in life. Water and clouds could become his villain, but they will also make him stronger.
You never know what form psychological scars eventually manifest themselves into.

Hindi cinema has made me apprehensive about films predominantly about children.
But Killa, yet another new-wave milestone in Marathi cinema, isn’t only about them. It shows us both sides of a muddy coin. It shows us what our parents presumably go through when they watch us become a turbulent mess.
It shows us their lapses in confidence and strength, and how everything is almost never in their control.

Chinmay’s mother is an integral figure; her struggles at work as well as her simple chores in the kitchen tell us a lot about his upbringing.

An unnamed uncle in Pune is repeatedly referred to.
This only goes to show that despite the presence of extended family, generous as they may be, as far as single mothers go, it’s always each woman for herself.
However, knowing Chinmay’s mother, she must have chosen independence. She must have chosen a bumpy path, only so that Chinmay doesn’t lose faith in authoritative figures.
Miss Subhash conveys so much with her stoic face. She displays a heady mix of survival and maternal instincts, never quite letting her frustration rule their tiny space. She is constantly acting stronger than she actually is. Her moments of vulnerability surface at work in front of colleagues she doesn’t trust, and for good reason.

Killa also has an easygoing, been-there-done-that tone, one that most school-going Indian middle-class children are familiar with. It looks to be set in the 90s, with landlines, letters, geared-cycles being the new craze, a fascination for new cuss words, and outdoor activities still assuming importance in innocent little lives.
For instance, Chinmay’s new friends at school slot into that quintessential ‘groupism’ mentality: Ringleader and Richie Rich (Gawade), naughty boy and ‘failure’ (Bhalerao), class romeo and joker (Yadav). Not to mention everyone’s favourite sarcastic math professor, a strict class teacher and desperate exam situations.

Arun displays a terrific sense of timing and detail with these scenes. Note how the naughty boy always has half his shirt tucked in, and is usually messier than the others.
Or how this kid probably has Attention Deficit Disorder, and doesn’t know it yet.
Or how the friends never really look at their elders (mother, teachers) while speaking to them.
Or how new schoolbags and pens induce unbridled joy.
Or how Chinmay, the philosophical introvert, begins to display signs of becoming a poet and a writer.

Mr. Arun employs kids and artists who understand exactly what phase of life they’re supposed to portray.
They understand the tiny behavioral nitty-gritties and antics common amongst their own. It’s not easy to be a pre-teen and then act exactly like pre-teens are supposed to. These are high levels of self-awareness. Such young actors must be nurtured, encouraged and must not be allowed to drift away through the cracks of horror child-to-adult star transitions. Parth Bhalerao, who last appeared (and stole the show from Amitabh Bachchan) in Bhoothnath Returns, is a face that should not fade away. Archit Deodhar looks and behaves a lot like Partho Gupte; he radiates sincerity and turmoil without being too expressive.

Spotless craft and soothing visuals aside, Avinash Arun succeeds in transporting us back to forgotten phases of our lives.

It’s usually a faint glimpse of a familiar perfume, musky scent or lilting tune that does it.
Killa is all that and more; a time machine that takes us forward by pushing us back into the lake with rubber tyres around our waists.

(KILLA is rated U/A. This is compulsory viewing for parents who were once children, and children who will one day become parents.)