“The Patience Stone”, originally a novel by Afghan director Atiq Rahimi, tells the story of a Muslim woman taking care of her husband who was put into a coma after being shot in the neck. He can’t move or speak and his wife slowly becomes overwhelmed as she takes care of him, her children and also deals with everyday life in a war torn region. Eventually, she starts spilling out secrets of her past. Memories she has never spoken of before. 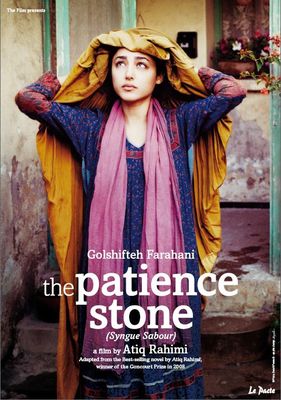 The film itself, a revelation. There is little to no action or violence depicted on screen but the tension is never lost. In fact, there are no character or locations named in the entire film. Subsequently, we are left with only the memory of this woman coming to grips with her own identity and freedom while her husbands lies there, still as a stone.

Golshifteh Farahani portrays the wife with such sincerity, grace, guilt and sadness that you can’t help but feel for this woman. She is in literally every scene and has more than 90 percent of the lines as well. All we ever see is her slowly revealing her secrets to her husband (and herself?). Yet Rahimi manages to portray her sense of shame and regret on screen in a way that any audience member can understand what she’s going through.

Eventually she is reborn as a new person after revealing her past and speaking more than her militant husband ever would have tolerated before. Rahimi doesn’t gloss over the fact that the wife was suffocating for most of her life, alluding to the way Muslim woman are treated in these regions from birth. The very fact that she finally had someone to talk to and share in her desires, remorse, embarrassment and happiness is what revitalizes her soul. As you leave the theater, you might find yourself revitalized as well.