“Dekh Tamasha Dekh” is an inspired and unique film from director Feroz Abbas Khan (coming off the critically acclaimed “Gandhi, My Father”). It’s the story of a town torn apart by the dispute over a dead man’s religious identity. What ensues is a mix of hilarity and horror that appropriately dissects the irrationality of violence, religious zealots, corruption and bureaucracy. 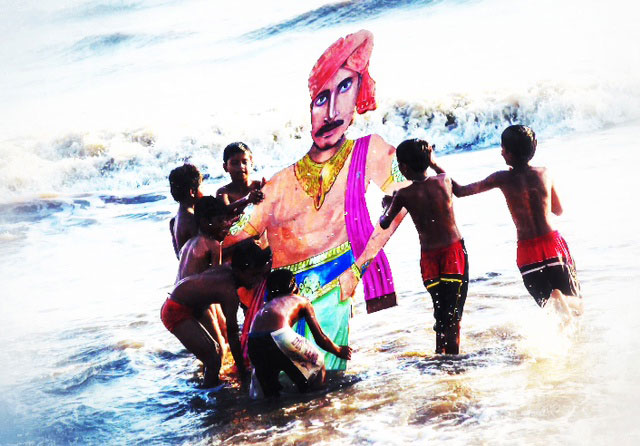 Khan’s two main vehicles of exposition here are, as stated earlier, comedy and drama. There are scenes displaying the complete ineptitude of the legal system in a rather amusing exchange between a judge and his people juxtaposed with some shockingly disturbing violent riots at night where citizens and cops pay the price. The contrast, while slightly jarring at first, is what ultimately keeps the film interesting. I consistently found myself laughing uncomfortably and I believe that is the Khan’s purpose here.

As for the performances, Satish Kaushik obviously stands out as the wealthy politician trying to exert his will on the people. He exudes everything “Dekh Tamasha Dekh” is about from the absurdity of his decision making to his relationship with an imported dog named Tommy. Vinay Jain is similarly very sincere as the new police chief in town trying to make sense of the mess he has gotten himself into. He serves as one of the few characters with a moral compass that has yet to be misguided by power or riches. It’s telling that his character struggles to get anything done without going to extremes himself.

I expect some audiences to not respond well to laughs interspersed with moments of shock and awe. But I imagine that might be the point Khan is trying to make. He wants us to understand what we’re laughing it. It’s funny because it sounds so ridiculous, but what it results in can be catastrophic for the people involved. It’s a unique social commentary on how even the smallest, silliest and most irrelevant preoccupations can have the gravest consequences. The method may not make for a perfect film but it makes for an important message nonetheless.