Ali spoke fondly of the festival’s mission to promote good cinema. He cited festival director Sakti Sengupta’s vision and all the volunteers’ hard work in organizing the event as crucial in spreading the word about South Asian films and filmmakers.

“What they do for us is to help popularize the idea of cinema more and more. And to put it in the desi way, humara dhanda ye chalate hai,” Ali said. “And especially all the volunteers who are doing this, you’re doing a great favor to cinema and to us individually.” 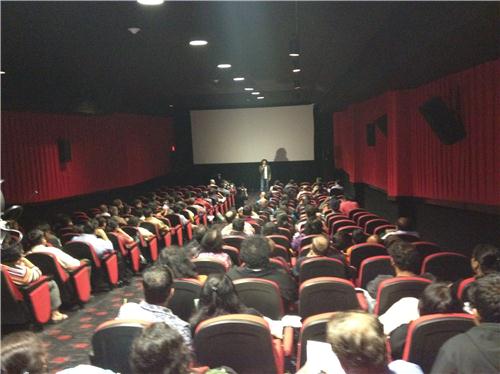 Imtiaz Ali speaks to a packed house at the festival Friday night.

Ali then spoke about the film “Dekh Indian Circus” directed by Mangesh Hadawale, a film he strongly believes in even though he had nothing to do with its production.

“I cannot really take any credit for what has happened in the movie. But it was so thrilling for me to watch a movie like this that I kind of volunteered to do all I could to bring it out to the people,” Ali said. “It’s about the life of a village. It is done with a lot of dignity and style. Great cinema.”

The film itself has already received some great accolades with an Audience Choice Award at the 16th Busan Film Festival as well as some best actor and actress awards for Nawazuddin Siddiqui & Tannishtha Chatterjee at the 12th Annual New York Indian Film Festival.

Stay tuned to IIF for more coverage from NJISACF as well as a review of “Dekh Indian Circus.”